Tim Cate will soon be a top Washington Nationals’ prospect! 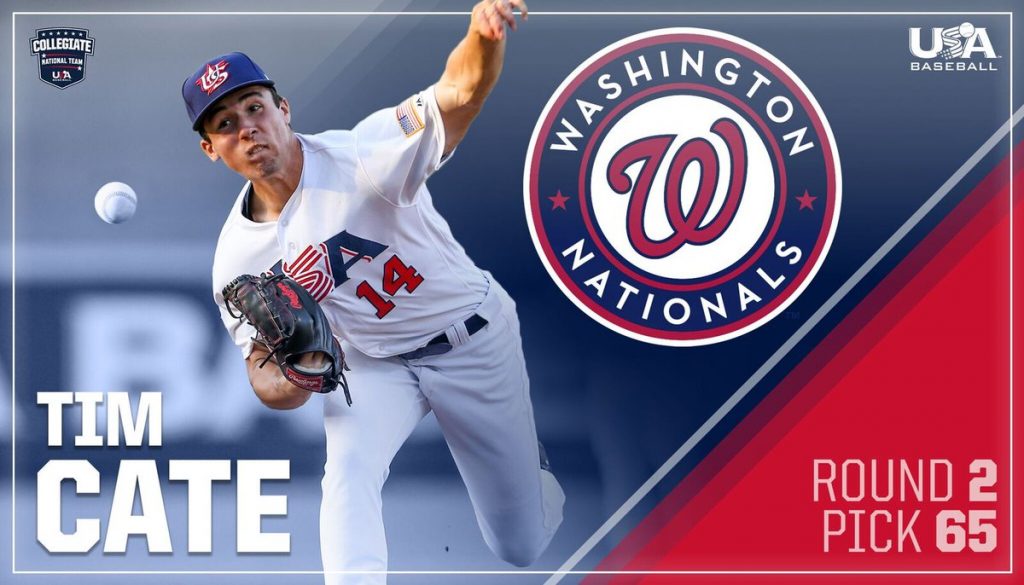 While it was no secret that the Nationals were targeting Mason Denaburg with their first pick, the Tim Cate pick in the second round was not a certainty because the Yankees and Red Sox were picking right before the Nationals. Tim Cate is from that gray area in Manchester, Connecticut where you’re either a Red Sox family or a Yankees family. Those teams have the close geography to scout northeastern players easily.

Cate’s draft advisors were CAA, and while they heard from many teams pre-draft, the Nationals did not come calling on Tim Cate until 48-hours before the Nationals phoned in their pick of Cate officially in the second round.

“I found out the [Nationals] were interested 2-days before the draft,” Tim Cate said. “…I did not do a pre-draft workout for Nats.”

The pick of Cate surprised few afterwards as he is a Tommy John survivor and is a pitcher with high upside. The Nationals had scouted Cate for a long time. He has already received big-time comparisons to Gio Gonzalez as they are both left-handed pitchers and about the same size. Cate throws a harder fastball than Gio throws these days, but Gio used to ramp it up to the mid-90’s in his younger days.

“For me he owns the best left-handed curveball in this draft,” Assistant GM and VP of Scouting Operations Kris Kline said. “I think we’re lucky to get this kid where we did.”

Before he officially signed, Cate visited Nationals Park last weekend and officially signed Tuesday in Florida according to a source. He reportedly signed at slot value at $986,200. Cate got to see the stars of the Nationals up close with Gio Gonzalez as one of them at Nats Park.

“I’d take that as a compliment,” Cate said about the Gio comparisons. “I think Gio has really great stuff and is a great pitcher.”

Where did Cate’s curveball come from in an era where most kid’s ditch the curveball and throw a slider. Cate told us that his dad helped him with it when he was 10 years old and ever since then it’s been his signature pitch. Since this is Father’s Day weekend — Happy Father’s Day to Greg Cate!

“I’ve always had a high arm slot which helps with the downward break,” Cate said.

Kline described Cate as a strike thrower with a smooth delivery and the Nats’ scouting department saw him throw not only in college but also for Team USA where the competition is like an All-Star team.

“He’s had success at every level,” Kline said. “And the highest level that he can compete at right now, so Team USA for these kids is tremendous and Tim Cate was part of that for two years in a row.”

One reason other teams were scared away was that Cate had Tommy John surgery back in high school and had some arm discomfort at the University of Connecticut this year. None of that scared the Nats away.

Cate was dominant in his first season with the Connecticut Huskies. He had a 2.73 ERA wiht a 1.00 WHIP and for his college career he finished with an 11.53 K/9. Cate never hit a batter during his entire college career and improved his wild pitches to only two this season. That Connecticut program has turned out stars recently like George Springer, Nick Ahmed and Charles Nagy is the best known pitching alumni, and Cate hopes to join them as some of the top Huskies in the big leagues.

For the amazing fun fact about Cate, he is a dominant left-handed arm and can also pitch right-handed. When he was a junior in high school at Howell Cheney Technical High School recovering from Tommy John surgery, Tim Cate actually pitched all summer right-handed in a summer league, and he dominated.

“Usually I go with the ambidextrous fun fact,” Cate said. “That secret is out [now].”

Can we let out some other secrets like favorite food, movie, or video game? Cate is a big fan of playing Fortnite in his free time and watching movies. His favorite baseball movie is Major League. That movie debuted in 1989 almost 10 years before the 20 year old was born. Cate is definitely a throwback in many ways. He is said to be intelligent and mature and with Denaburg unsigned so far, Cate is the highest signed draft pick for the Nationals and he got down to West Palm Beach promptly. Because Cate had not pitched after his college season ended, the Nats did not send him immediately to short-season Class-A Auburn Doubledays. He should be there shortly and will stay at the Nats West Palm Beach facility to get ramped up. He also said getting adapted to a 5-day rotation from the 7-day college rotation takes some time as many remember when Stephen Strasburg was drafted out of college. Like Strasburg in college, Cate was the “Friday Night Starter” which is the spot reserved for the best pitcher on a college team.

Getting picked by an NL team also means that Cate will have a chance to bat as a pitcher, and he was considered a good hitter back in high school which would make Max Scherzer smile as he talks about his high school swing which has done him well in the big leagues.

“I’d like to think I’m a good batter,” Cate said. “I loved batting in high school and definitely missed that aspect of the game once I became a pitcher-only in college. I’m excited that I might get the chance to bat in a professional game.”

Cate accomplished so much so far in his baseball career which also included pitching for the Bourne team in the Cape Cod League. With Team USA, he got to pitch against Cuba and Chinese-Taipei. We will continue to follow Tim Cate as he moves up with the Washington Nationals as a top-prospect.