Down on the Farm, Take Two 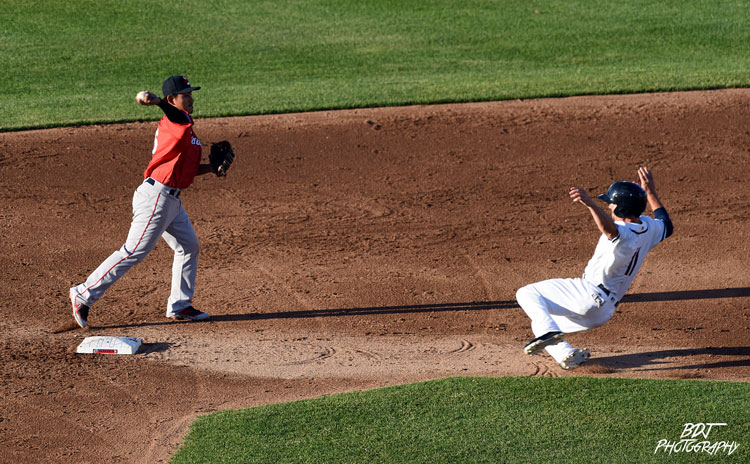 For those unfamiliar with the rhythm of the minor-league season, this is usually when first half ends for the “A” teams and roughly when the domestic “shorties” start up. The DSL just finished up its second week, but more on that in a bit.

Like I did a couple of months ago, I’ll go level by level and make some observations, but this time I’ll go from south to north, foreign rookie to AAA.

DSL
The D-Nats are 9-4 and just one game off the pace in the DSL South (don’t get too excited, there are 44 teams in the DSL and just six make the playoffs). There are a lot of new names this year and they’re young: 23 were born in the year 2000 or later. This was true two years ago, too, so temper your expectations.

GCL
The GCL starts up tomorrow and with no PR staff and no local newspapers–sadly, only one of the five affiliates north of Florida has consistent local coverage, which is particularly sad because one of those affiliates is located in a capital city–we’re at the whims of what the Nationals deign important. Most of the 2018 Draft picks will play here at least for a little while until spots open up in Auburn and Hagerstown.

AUBURN
Opening Day was Friday and the roster is laden with IFAs and 2017 Draft picks. Some names we’re watching at NationalsProspects.com include Israel Pineda, an 18-y.o. catcher; almost-18-y.o. Jose Sanchez, who played alongside Yasel Antuna and Luis Garcia in the GCL infield last summer, 18-y.o. OF Ricardo Mendez, and 19-y.o. LHP Nelson Galindez.

HAGERSTOWN
For the first time in several years, the Suns were an also-ran in the Sally Lg. North in the first half. It’s not hard to figure out why: the team’s pitching is 10th, 11th, or 12th in nearly every statistical category. The exception is Nick Raquet, who has been good but not great (but that’s sight-unseen). Antuna and Garcia have both been swinging the bat well when you consider they’re both 18 and three-plus years younger than the league average. Unfortunately, they’ve also combined for 29 errors (and last year’s 4th Rd. pick Cole Freeman has 10). Given the Nats’ proclivity toward collegiate picks, most of the non-IFAs are old for the level.

POTOMAC
It’s an even year, so it’s de rigeur for the P-Nats to make the playoffs. As they’ve traditionally been, Potomac has roughly five players who are true prospects and a whole lot of 24- to 25-y.o.’s. Most folks know about Carter Kieboom, who needs more time in the minors even if the scouts by boxscore feel otherwise. An injury to Telmito Agustin has slowed an otherwise breakout season, but he could be back as soon as this Thursday. To be blunt, Blake Perkins has been a disappointment. Rhett Wiseman has been hitting the ball well, but at almost-24 and (in case you didn’t hear it the first 5,271 times) a product of the Vanderbilt program, he should be. Unfortunately, his fielding has dropped off dramatically. Much has been made of Wil Crowe‘s 9-0 record, which says more about how the team has scored an average of six runs per game for him. I’ve yet to see him dominate.

HARRISBURG
The Senators just saw a six-game win streak broken but they’ve been playing good baseball. The power that made Daniel Johnson a breakout prospect last summer has fallen off considerably, but he’s still getting on base, stealing more than a few, and fielding well. Kelvin Gutierrez and Drew Ward are also having decent years, with the latter finally shifted to his proper position at 1B. Who’s the next Justin Miller? It might be Kyle McGowin who’s racked up 52K’s in 37⅔ IP in his fourth season at AA, as it appears he’s vastly improved his slider.

SYRACUSE
The Chiefs have averaged 82 losses the past three seasons and for the first six weeks of the season, it looked like a +.500 season might be possible. Instead, they’ve been “working” hard to revert to the mean with eight straight losses (and counting). With the usual slew of injuries, most folks are aware of the stockpile of replacement-level players, with the possible exception of Yadiel Hernandez who’s cooled off considerably in June after tearing up the E.L. in April and May. Much as it pains me to write it, both Jose “Orange” Marmolejos nor Austin Voth could be DFA’d if/when the time comes.