Like the Washington Nationals, the Mets will have a new manager this year as they will have rookie manager, Mickey Callaway, running their dugout. The new manager has seen his team make many changes to their roster. This off-season, the Mets have added several big names in baseball like Jose Reyes, Adrian Gonzalez, Todd Frazier and Jay Bruce. They have all been in multiple All-Star games in their long careers. What we don’t know is where any of them are on the age regression curve. Todd Frazier turns 32-years-old next week, Jay Bruce turns 31-years-old during the first week of the season, Adrian Gonzalez turns 36 in May, and soon to be 35-year-old Jose Reyes was re-signed to a one year deal. He is penciled in as the utility infielder.

While the Atlanta Braves and Los Angeles Dodgers are paying all but $545,000 of Gonzalez’s contract, the Mets don’t have a lot of financial risk in seeing if 2017 was an outlier for him. With the acquisition of Frazier, the Mets will have to reconfigure their infield as they have the 32-year-old multiple All-Star Asdrubal Cabrera who could end up shifting back to 2nd base.

The Mets also have the youngster Amed Rosario who was the presumptive shortstop and Wilmer Flores. It appears with signing Frazier that the Mets will have some tough decisions to make on their bench with players like Dominic Smith.

If the Mets go with an infield of Gonzalez, Cabrera, Rosario, and Frazier, their infield will average nearly 31 years old. Then you have the question of what the Mets do with David Wright who is owed $20 million this year and under contract through 2020.

The Mets outfield will be Yoenis Cespedes, Jay Bruce and Juan Lagares to start the season, and Michael Conforto will join the team possibly in May when he returns from the disabled list.

Like it, love it or hate it, the Mets will be interesting to watch in 2018, and they have that starting rotation of Jacob deGrom, Noah Syndergaard, Matt Harvey, Steven Matz, and Zack Wheeler.

At the catcher position, the Mets have Travis D’Arnaud and Tomas Nido and Kevin Plawecki will compete for the back-up. Of course we cannot forget that the Mets signed Jose Lobaton to a minor’s deal.

FanGraphs have added Todd Frazier for the Mets’ projections and estimations, and they have moved the Mets up to an 81-81 record today. Frazier adds a +2.1 WAR according to FanGraphs.

The NL East is looking more competitive than last year with the exception of the Miami Marlins. FanGraphs has the Phillies and Braves tied right now and if either team can add some significant free agents, this could all change.

With so many free agents still available, it was anticipated that the Mets would still try to improve. The main part of the equation is to never underestimate your opponents while remembering that this Nationals team is very good.

“We’re going to compete at the highest level every day,” Nationals manager Dave Martinez said. “The goal is to play the last game of the World Series and win it.” 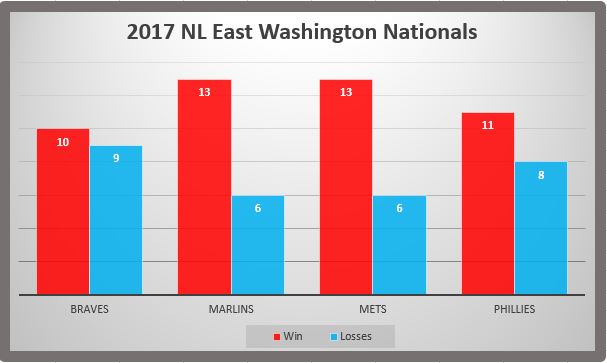 “We have a team that can do a lot of things,” Nationals manager Dave Martinez said. “I love analytics. I come from a background where analytics was huge. Give me all the information. We are not dealing with robots. These are all players. There is a fine line of information that you give to players. We talk about getting the edge on this team. This is it. You have the numbers right there.”

This entry was posted in Analysis, NLEast. Bookmark the permalink.
← Previous Article | Next Article →