The #Nats have tendered all of their contracts…now what?

Posted on December 2, 2017 by SaoMagnifico 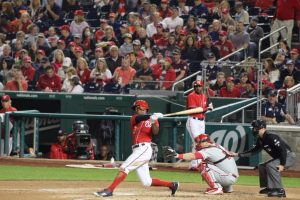 Michael A. Taylor at bat. (Photo by Marlene Koenig for TalkNats)

The Washington Nationals took care of one not-so-insignificant piece of their arbitration puzzle early when they inked Bryce Harper (set to become a free agent next winter) to a $21.625 million contract for 2018 on May 13 of this year. That was the largest ever contract for an arbitration-eligible player, even one in his final year of team control before free agency. Then again, it’s Bryce Harper, and for Harper, setting records is old hat by now.

As expected, on Friday, the Nats announced they had tendered contracts to their other three arbitration-eligible players: Anthony Rendon, Tanner Roark, and Michael A. Taylor. All three were no-brainers, unlike last winter, when the Nats chose not to extend a contract to Ben Revere and he became a free agent. (Another player last year, Danny Espinosa, was tendered a contract but traded to the Los Angeles Angels before he and the Nats agreed on a salary.)

The Nats’ decision to keep Rendon, Roark, and Taylor on the payroll doesn’t mean their 2018 earnings have been decided or that arbitration has been averted. It just means the organization has chosen to exercise its team control for next season over all of them. The Nats will work with Rendon, Roark, and Taylor to agree on salaries, just as they did with Harper to agree on his monster raise during the season. If they cannot come to terms with one or more of their players, an arbitration hearing will be held and either the Nats’ offer or the player’s demand will be selected by the arbitration panel as the player’s 2018 salary.

Here is what MLB Trade Rumors predicts for each of the Nats’ three arb-eligible players:

As you can see, all three of these guys will be able to afford some new threads and a bigger hot tub — oh, and maybe a few Maserati sports cars, and possibly a second or third house, too — with the raises they’re due to get. Rendon in particular stands to see his salary just about double following an MVP-caliber campaign. He’s in his penultimate year of arb eligibility, as he’s set to reach free agency after the 2019 season. So is Roark. For Taylor, this is his first winter in which he is eligible for arbitration, so for him, the raises are just beginning.

Of course, it’s possible that in the course of negotiating a 2018 salary, other things may come up. As noted above, the Nats traded Danny Espinosa after tendering him a 2017 contract but before hammering out a salary agreement. And while it’s not the norm, it’s far from unheard-of for teams to avoid arbitration with a player by agreeing on a larger extension. (The Milwaukee Brewers did just that this week with reliever Jeremy Jeffress, guaranteeing him a 2018 salary while adding club options for 2019 and 2020 to his contract.) If the Nats do take a run at extending Rendon this winter, they could seek to buy out his last two seasons of arbitration eligibility, in which case he could potentially be in line for a much more substantial raise than even MLBTR projects.

The Nats might not even be limited to negotiating with Rendon, Roark, and Taylor to avoid arbitration. If general manager Mike Rizzo acquires a player who is arb-eligible this winter — for instance, Cleveland Indians starter Danny Salazar or San Diego Padres closer Brad Hand — before he and his current team agree on a 2018 salary, then it will become the Nats’ responsibility to either come to terms with that player or risk a rocky start to the relationship by going before an arbitration panel.

One last note: Rizzo has a history of not taking it well when a player rejects salary offers and opts for an arbitration hearing. After the 2014 season, reliever Jerry Blevins chose to go to arbitration after the Nats offered $2.2 million for the 2015 season. The arbitration panel sided with Blevins and ruled that the Nats meet his demand: $2.4 million. In spite, or perhaps because, of it being just a $200,000 difference, Rizzo turned around and traded Blevins — a useful left-hander entering his final year of team control — to the rival New York Mets for minor league outfielder Matt den Dekker during spring training.

So while we know that the Nats are (not surprisingly) exercising their right to control Rendon, Roark, and Taylor in 2018, there’s a lot that is yet to happen between now and Opening Day. The off-season continues…