Tax law changes? What does that have to do with sports? While you were sleeping, you might not have realized that American politicians were making tax law changes which will affect many lives including the world of sports and stadium building.

Tucked away on Page 54 of the H.R. bill section 304 is “No tax exempt bonds for professional stadiums” which would strip away that tax free federal tax status from those professional teams trying to build stadiums with any taxpayer money in most cases.

You have to wonder if The Ballpark of the Palm Beaches would have been viable in this current climate? That concept for the new stadium was a fight in Florida as it was financed by those tax-free bonds. With the Astros winning with World Series, attendance could increase at TBOTBP as the Nationals share the complex with the Houston Astros.

While those tax law changes proposed seem like no big deal in many respects, it could certainly change the ability for municipalities to encourage relocation of teams or even retaining teams in their own jurisdictions. The Syracuse Chiefs which are currently the Triple-A affiliate of the Washington Nationals and will need a new home after the 2018 season as the New York Mets have taken over their stadium.

It is possible the Nationals would move their Triple-A team to a temporary home and build a new stadium. Possible but improbable as new stadiums even for minor league parks has been a nightmare beyond financing. We have seen the issues with the Potomac Nationals on building a new stadium. There is currently no disclosed plans on what the Nationals will do with the Syracuse Chiefs on a relocation. This will be a subject to watch.

Public stadium financing started in the 1950’s when the Boston Braves relocated using the tax law exemptions for bonds. It has been a trend with over 90% of the stadiums since then. Public financing is a big deal and stadium construction would certainly slow and team owners could further cut corners as much of this is about dollars and cents. It is still possible even if the law passes to see new stadiums — it could just be done differently and with new strategic creativity.

“If you were going to build a stadium that actually had to be paid for out of the income of [a sports] team, you would never spend $1 billion, let alone $2 billion,” said Roger Noll professor of economic at Stanford University. “This would affect them enormously.”

Lawyers and accountants will work on loopholes and if they can’t find any, teams might have to finance and build the stadiums themselves and get their tax breaks from sales tax exemptions and other creative solutions. Time will tell.

The Hagerstown Suns are still reportedly up for sale, the Potomac Nationals need a new stadium, and the Syracuse Chiefs need a new home. The P-Nats went back to Prince William County lawmakers with a plan to pay for the stadium themselves and still couldn’t get lawmakers to make this work showing how difficult it is when you offer to build with your own money because there was still opposition to new construction as there is always going to be an infrastructure costs with new roads, water, sewer, etc.

“We’ve all read about certain professional sports teams threatening to leave if a local government doesn’t buy them a new stadium. The exact opposite is happening here,” said Tom Sebastian, a senior vice president with JBG. “The Potomac Nationals have agreed to pay 100 percent of the cost to construct a new stadium so that they can stay in Prince William County.”

The Harrisburg Senators seem to be the only Nationals minor league full-time affiliate that is fine with their status quo along with the Florida Gulf Coast team who plays at the new Palm Beach complex. 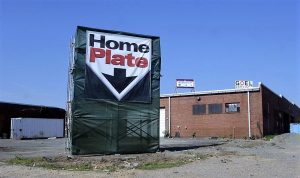 For those who thought D.C. residents got screwed on the public financing of Nationals Park, it is quite possibly the “poster child” for how these can deals be successes beyond the dollars and cents. The benefits of new stadium construction can gentrify struggling communities and the results can continue to transform positively far into the future. The Nationals Park bonds issued by the D.C. Government in their deal with Major League Baseball who sold the team to the Lerners has turned into an annual windfall now with the success of the team.

Construction around the stadium is now booming. It took a while, and the Washington Business Journal now has reported that “According to the Office of the Chief Financial Officer, the ballpark bonds could be paid off as soon as 2026, a decade earlier than required.” Say what? The bonds that were supposed to be a bad deal according to the critics will pay off possibly 10 years early.

The critics are always out there and former Mayor Anthony Williams deserves much of the credit for bringing baseball back to DC. Turn back the clock to what the Washington Post wrote about D.C. Delegate Kwame Brown who they said was elected because he was opposed to the stadium showing the volume of the critics who voted for him to fight the stadium.

“Everyone seems to want baseball here, but they tell me you can’t have an unauthorized amount that you can spend,” said Brown, who was elected in November 2004 on an anti-stadium agenda. “We have set a limit on how much we can borrow but not on how much we can spend. No one else has done that. . . . We have a bad deal. The question is how do we deal with this bad deal.”

Bad deal? Some had the foresight on Nats Park and they were more than right and Kwame Brown was wrong. Earlier in the year, Biznow also wrote a story on the success brought by Nationals Park. The area now has the new DC Wharf and The Anthem which benefit from the upgraded neighborhoods and traffic Nats Park brings and the DC United also have a new stadium around the corner from Nationals Park.

Not all stadium deals are good deals. Those who read here love baseball and clearly others do not. Even those who don’t like baseball have become beneficiaries of what baseball brings to the region. You build it and they will come — by the millions they have attended every year coming back to Washington D.C. from the area and the world. Nationals Park will be a great deal far into the future when those bonds are paid off and still generating massive tax revenue. The side projects of the the Nationals Baseball Academy in Anacostia, the new parks and upgrades, the community involvement from the Nationals, and the job creations have been tremendous.

Quality of life is better for most in that area. That success might not translate for the Tampa Bay Rays and Oakland A’s who have sought new stadium deals for nearly a decade. When they already have you, there is disincentive and that is what the Potomac Nationals have dealt with in Prince William County Virginia.

This 2018 season at Nationals Park will host the All-Star game. Baseball will bring a windfall of tourists and dollars in a way that sports has never done in Washington, D.C. before.

If you have ever wanted the history of the Nats Park area, nobody has covered it better than www.JDLand.com They have hundreds of photos.