We arrive, finally, at Spring.  Regardless of the relative mildness of the past winter there is a definitive sense of joy at having left it in the rear-view mirror.  Winter is the domain of darkness, summer is light.  As daylight waxes it brings delicious cool twilight evenings outside into time periods formerly reserved for cozy fire-lit rooms.  This is the rich reward for having endured.  Not by accident baseball starts its long slog less than two weeks after the Equinox.  One week later begins the official “Growing Season” in this area per the National Weather Service.  The coupling of those seemingly disparate items is far from random.

Baseball is a game fledged in America’s agrarian 19th century.  Civil War soldiers played the game to pass the time in camps.  At its very core baseball remains a game pioneered by farm boys at play in the fields.  Green grass, youthful energy, and sunshine fuel a rural elixir and link to our great outdoors nestled within the urban hardscape.  A stadium is called a “Park” for a reason.  What do farm boys do in the Spring?  They plant.

A late acquaintance owned a large farm on the Eastern Shore.  He told me once that Spring planting was the equivalent of playing super-slow-motion roulette in the dirt.  “You put your money in the ground.  Fret over it all summer.  Then find out in the Fall how you made out.  Some years you win.  Some years you lose.  Then most years you just shuffle money around.”  It takes courage to be a farmer.   To put your livelihood on the line to be buffeted by the vagaries of untamable weather is a vivid form of life on the edge.  Baseball affords us the chance to live this experience vicariously.  On Opening Day we plant our emotional baseball seeds in freshly tilled soil.  It is an act of faith.  Whether it is the crop futures, a set of computer-generated probabilities, or a collection of expert predictions the fact remains that the future is always far from certain.  We plant.  We fret.  And, yes, we hope.

Alexander Pope wrote that, “Hope springs eternal in the human breast.”  Spring and hope are completely emulsified together.  It takes faith to put seeds in the ground.  But, it takes hope to see you through the summer as you grind towards an uncertain outcome.  To be a fan of a baseball team hope is a requisite commodity that needs constant replenishment.  The game, the series, the division race, and all the other increments that comprise the behemoth that is a baseball season have an attendant thirst for hope.  It will gladly take all you care to throw at it.  There is a certain wisdom associated with keeping one foot firmly on the earth, however.

“If you live in hope, you will die in despair.” —Sam Huff 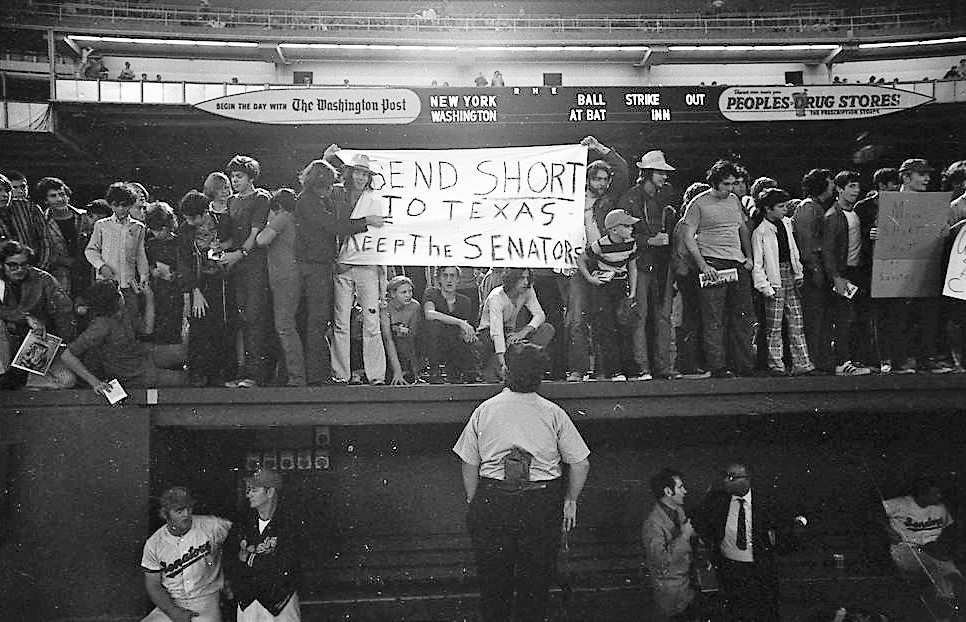 I grew up around old farmers.  They have a certain grace and calm about them that is undeniable.  A look into their crow-footed eyes reflects years and decades of planting, hoping, and reckoning.  The realities of the harvest seldom, if ever, meet the potential promised by the mathematics.  If you stay at the game long enough you will have the unbelievable year.  You will also have one or more that are total wipeouts.  String a couple of those terrible years together and the worst fear of all can come true: You lose the farm.  Baseball hopes and fears seldom stray into such terrifying waters.  For all the sad tales of woe recounted by generations of long-suffering Cubs fans before their win last year none included the words, “We watched our team leave town.”  If you are a Washington fan over 46 years-old you have watched your team do just that.  And, if you’re over 57 years-old you’ve seen it twice.  Every accident analysis has two dimensions; probability and consequences.  Washington baseball sits at the top of the chart of both attributes.  We’ve watched them leave.  Then we watched them stay away for 34 years.  Seldom realized or not our worst fears were in that dreaded slot for a good reason.  Some wounds heal without scars.  These were not in that category.

Mayor Anthony Williams proclaims in 2004, “Baseball is back in Washington, D.C.!”

A walk through the concourse of Nationals Park on a busy day reveals a cross-section of age demographics that ranges the spectrum from gray-hairs to tiny tots.  The chasms that separate the generations run across one indelible San-Andreas-sized fault: “Were you here when the Senators left town for good?”  Scar tissue in a muscle limits movement.  It is weaker and less resilient than sound tissue.  For some of us the baseball scars left by the decades in the wilderness place limits on the upper reaches of our greatest hopes.  For many years our fondest dream was to simply have a team…even if it was terrible.  We checked off both elements of that box.  Then the fondest hope was for a competitive, relevant team.  There’s a check in that box also.  Then the hope was for a contender.  Check.  You want a championship?  A scarred muscle has limitations.  Somewhere between hope and fantasy lies a fuzzy, nondescript border.  The wise old farmer hopes for a “Good Year” and accepts the windfall gracefully.  The young one, not tempered by the past, suffers no such boundaries on hope either in investment or display.

That dichotomy of expectations and hopes are on display throughout the year in the various outlets for fan communications.  The, “Hey, we’re in the playoffs again” crowd is countered by the “…and they’d better darned sight win this time” crew.  It is part and parcel of the team and its base growing into a bona fide baseball town.  No ritual is more common or spirited in such places than the call to fire and replace everyone in sight.  When Peter Angelos famously said that Washington would never become a baseball town he was actually voicing his worst fear.  It has gained that status quickly and irrevocably.  Hopes and fears are all based on perspective.

Championships are rare.  No city in America has enjoyed more championship titles over the past fifty years than Boston.  With four professional teams in play the past fifty years represents 200 seasons.  From them have come 19 championships.  Despite the amazing successes, the probability of a title season is still slightly less than one in ten.  If you add the past 200 seasons of professional sports in Washington (since 1943) you get four titles; three in football, one in basketball. Two-percent.  One-in-fifty.  Those are the odds.  There are cities that would welcome those odds as an upgrade.  Atlanta has 159 seasons between their three teams and the short-lived hockey franchise.  They have one title.  If you pin your hopes on “World Series or Bust” then Sam Huff was speaking directly to you. 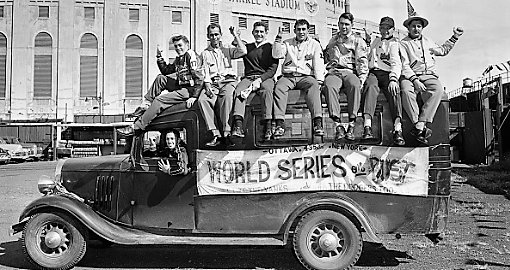 The “World Series or Bust” slogan has been around since the early days of Babe Ruth.

While ultimate success is elusive, the hardly-subtle undercurrent in Washington sports is that failure is inevitable.  There is a palpable angst in the conversations.  It isn’t that Washington teams simply fail to bring home the bacon.  They do so in cataclysmic fashion reminiscent of Greek tragedies.  A 6-0 lead disappears in a deciding game.  The hockey team sets records for new heights of success for the regular season only to fizzle in the second round of playoffs. The basketball has been largely irrelevant for long stretches of years.  And, if you are a life-long Redskin fan you had a fabulous 1980’s.  The rest of it…not so much.   The fans of pre-destination would take solace in such widespread fatalism.  James Barrett Reston could have been speaking of Washington fandom instead of golf when he said that it was, “…a plague invented by Calvinist Scots to punish mankind for his sins.”

It is against that ashen sky that we approach our Spring with seeds in hand and hopes in heart.  The odds are long.  But, they are always long.  If you wait for short odds you will run out of years first.  Overcoming long odds is one of life’s wonderful treats.  But, you have to be in the game first.  Plant your seeds and hope for something seldom.  Let’s play some ball. 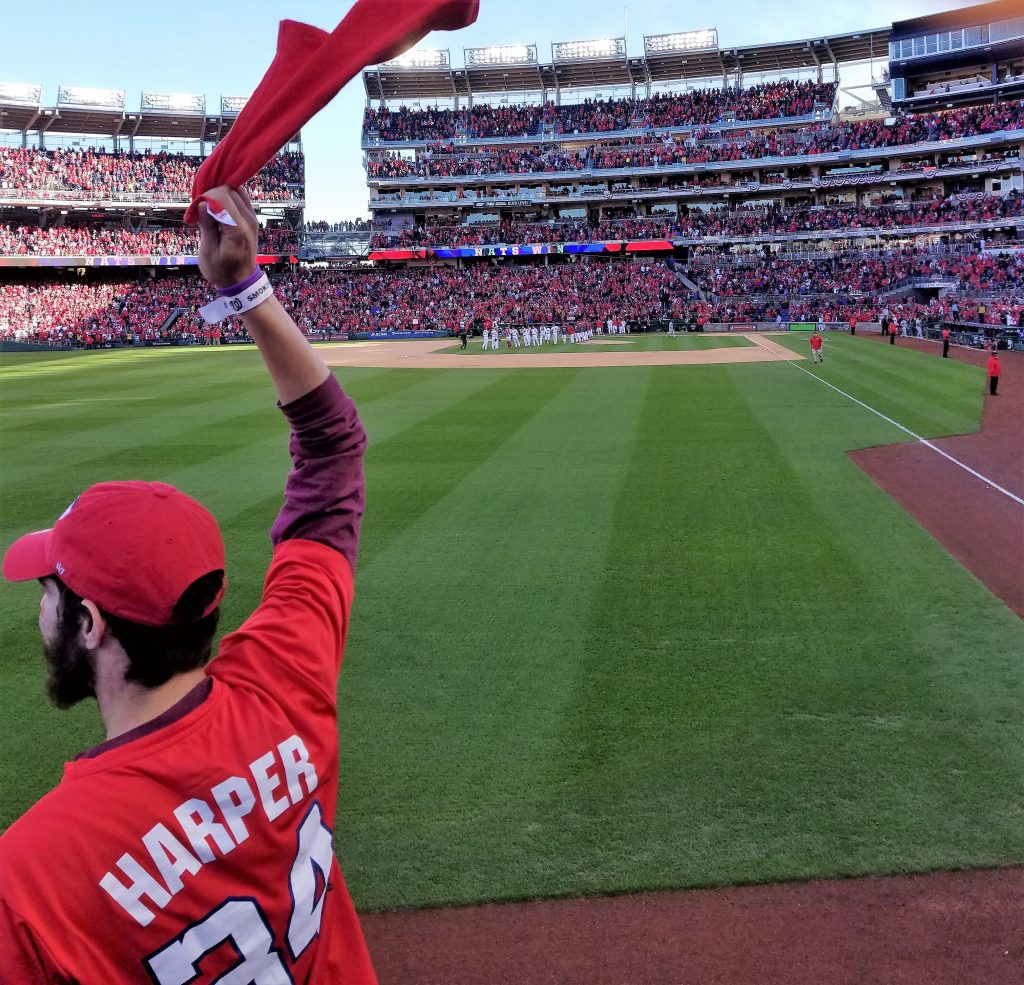