Updated: Max Scherzer wins his 3rd Cy Young award; Only the 10th player ever to join that grouping! 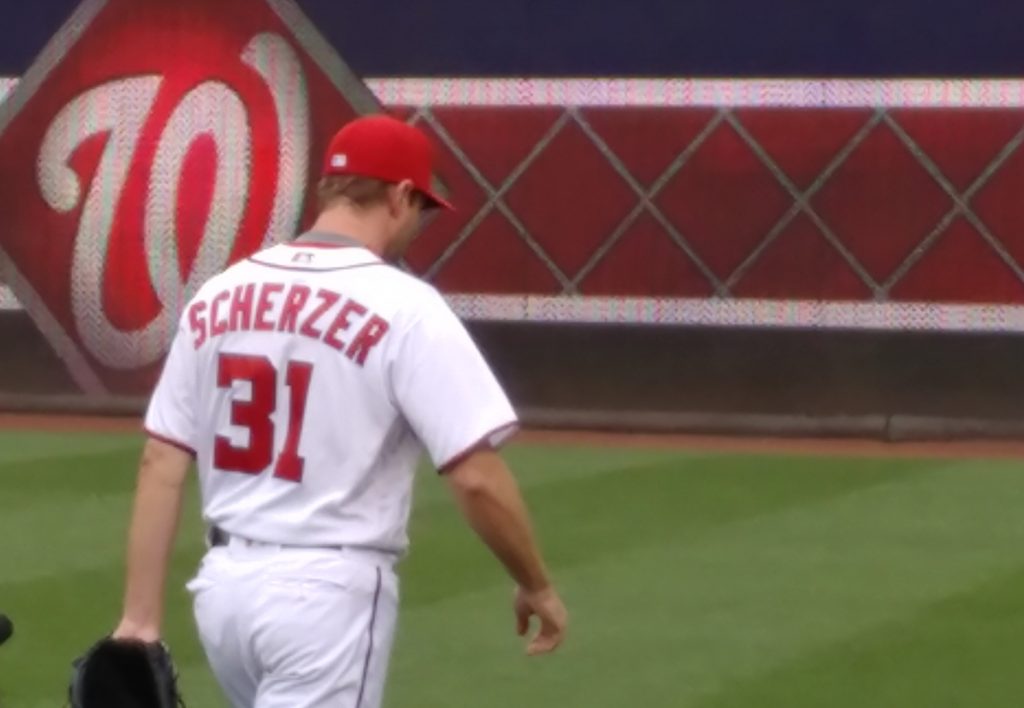 The BBWAA will announce the winners of the AL and NL Cy Young award winners tonight, and Nationals fans already know that Max Scherzer and Stephen Strasburg are two of the three finalists along with Clayton Kershaw. Nats’ teammate Gio Gonzalez should finish in the top 7 after he tumbled out of contention for the award with a 5.47 ERA in the month of September.

Tonight are the #BBWAA Cy Young awards: Look for Corey Kluber of the Cleveland #Indians and Max Scherzer of the #Nats to be honored

Scherzer met that threshold of excellence that he said is part of his personal goals of “30 starts per year and 200 innings” and both Strasburg and Kershaw fell short of those milestones. In fact many pundits questioned whether or not the Los Angeles Dodgers were purposely putting starting pitchers on the DL to keep them fresh. Kershaw pitched only 175 innings to lead his staff and Alex Wood was second with 152 innings followed by Rich Hill at 135 innings. Contrast that with the Nationals who had 4 pitchers at more than 175 innings and Scherzer and Gio Gonzalez both finished with over 200 innings.

The commonalities of that esteemed group have one think in common and that is they are all icons of pitching while every one of those retired pitchers in that group is in the Hall of Fame except Roger Clemens. Not even Nolan Ryan has three Cy Young awards. Max Scherzer could be named to that group tonight.

If you don’t want to read about inning limits and fatiguing, just stop reading here —-

Scherzer is the odds on favorite to win the award tonight, but if there is an upset and Scherzer doesn’t win it, he can go back to the game where “fatiguing” became a baseball term as ESPN reported in a piece titled, “If Max Scherzer doesn’t win the Cy Young, he’ll have himself (and the Braves) to blame”.

That mid-September game started by Scherzer after the Nationals clinched the NL East saw a visibly tired Scherzer stay on the mound as he survived the previous inning fighting what appeared to be leg issues, and he stayed in the game as he gave up 7 earned runs in total when he could have exited the game with 1 or 2 earned runs against the Braves and had his ERA that had dropped in the 4th inning below 2.15 balloon to 2.59 after that 116th pitch. After the game, Scherzer said the following:

“With the postseason coming into play, with an extra day coming up, I asked, and we thought it would be a good idea to try to get me into 120, 115, 110 pitch count tonight. I thought that would help benefit me going forward and then looking ahead into the postseason, to pitch with some extra fatigue.”

Scherzer certainly had mixed results in the post-season as he entered the post-season with a hamstring injury and pitched game 3 instead of game 1 or 2 which didn’t allow Scherzer to pitch game 5 on regular rest instead entering as a reliever, and we know how that inning ranked in Nationals post-season disasters.

Incoming manager Dave Martinez and pitching coach Derek Lilliquist will certainly have some of their own ideas on rest and fatiguing. For what it’s worth, Scherzer had this to say after winning the Cy Young last year:

“For some reason, this just means so much more to me. It just verifies everything I try to go out there and set out to achieve,” . . . Winning the second [Cy Young award] confirms that everything I tried to do works.”

Not true Max, even in 2016 you made some questionable calls like pitching the final game of the season instead of throwing a side session and resting up as you went stumbling into game 1 of the 2016 NLDS on regular rest and you gave up 4 earned runs over 6 innings. That didn’t “work”.

What works over the marathon of the regular season seems to be vastly different in the post-season where it’s a sprint. If you look at your World Series teams this year, neither team pushed their starters hard in the regular season and whether or not that was due to legitimate injuries, we will never know as teams took full advantage of the new 10-day DL rule. The Astros who traded late season for Justin Verlander didn’t have another pitcher go over 154 innings in 2017. The Dodgers as mentioned capped out at 175 innings with Kershaw. Both teams are very analytical on rest and innings and maybe like the Cubs of 2016, there is a method to not pushing your starting pitchers when you have the option which the 2017 Cubs did not.

Max Scherzer is a beast on the mound and a workhorse and probably the best pitcher per inning in baseball. After all he endured in 2017, he was still the best pitcher in the regular season.

The award presentation will be announced ‘live’ on MLB Networks at 6pm EDT.