Bonnet Creek is a newer area in Orlando near Disney World and the Waldorf Astoria resort is the official venue for the General Manager meetings this year as well as Orlando will be the destination for MLB owners for their quarterly meetings on Thursday and Friday. With all the big-wigs in town this week, this could be a busier week than previous years. Early arrivals got in their tee times today at the Waldorf Astoria Bonnet Creek golf course and many hung out in the lobby of the adjacent Hilton resort where they have sections with big screen TVs with the football games on-demand. The actual meetings will take place mostly tomorrow and on Tuesday and Wednesday and if the GM’s don’t like the format or schedule they can blame Mike Rizzo and Dayton Moore who were this year’s co-planners.

This is like a mini-version of the Winter Meetings as each GM is limited to bringing two members from their front office into the actual meetings. All of the top agents will be in Orlando for their own side meetings. The stars this week should be some familiar faces who will be very popular as new Marlins’ CEO Derek Jeter and his GM Michael Hill have perhaps the hottest trade chip in baseball with Giancarlo Stanton. Then you will have Scott Boras who is the super-agent representing some of the biggest names in free agency with J.D. Martinez and Jake Arrieta. 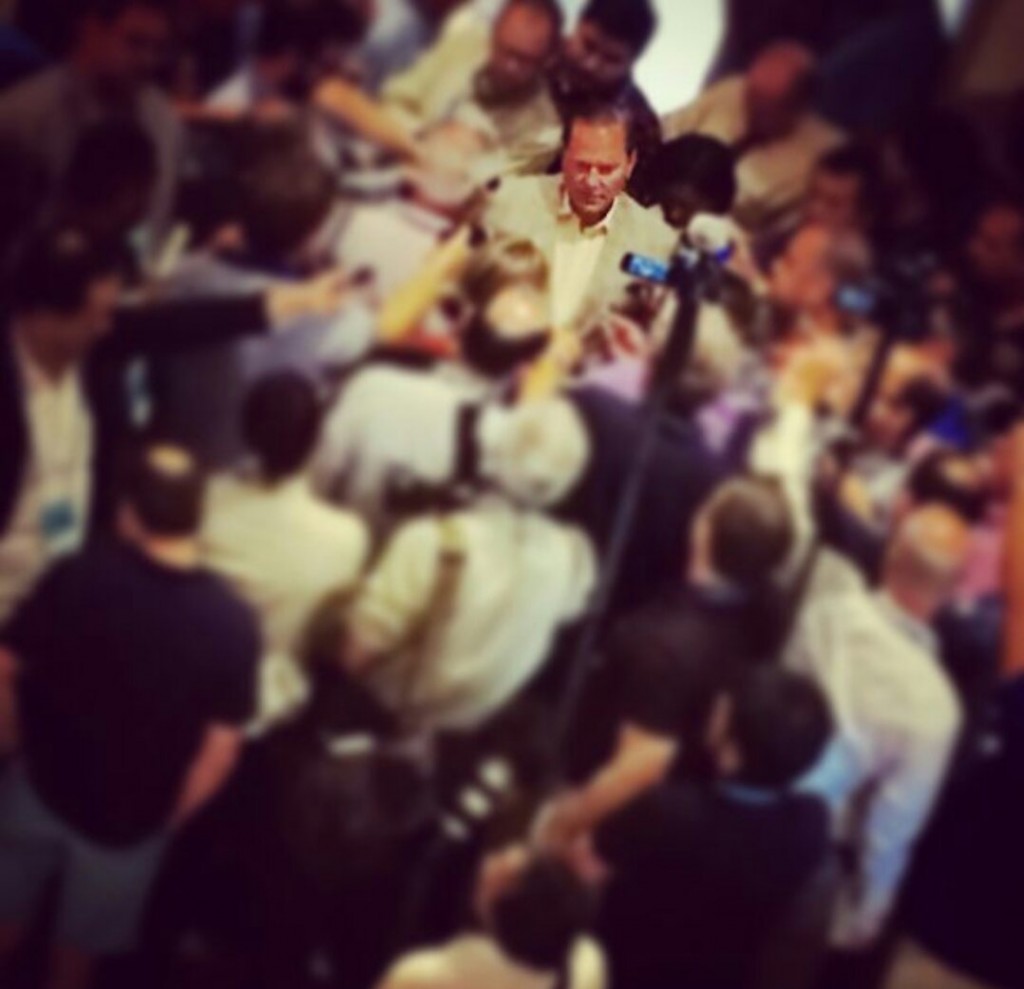 This was Scott Boras two years ago at the GM Meetings.

It is quite possible that the largest contract for a free agent this off-season goes to J.D. Martinez and Scott Boras will tell you what he thinks of Martinez.

Those words have been spoken by Scott Boras before. Few agents have represented the superstars that Boras has.

Teams that have reached out early on J.D. Martinez have gotten the impression Scott Boras is looking for something in the $200 million range.

On Jake Arrieta, he could wind up back in Chicago if they are willing to write the contract that Boras is seeking.

“The Cubs’ calculus of what they’ve done is very revealing to me,” Boras said. “That is they’ve traded four or five players to win a championship [last year]… And when you do that, you’ve created more of a ‘now’ scenario, more of a ‘now’ window, and that I think bodes well for having veteran pitching [like Arrieta].”

Mike Rizzo will certainly chat with Scott Boras this week and maybe share a laugh about the recent rumors that swirled in the wake of the Dusty Baker departure that Scott Boras had his hand in that which started with a Thom Loverro interview.

“I want nothing to do with the managerial process,” Boras said to Jon Heyman. “If I’m involved in managerial decisions, that would interfere and conflict with my commitment to the players. I represent players. It would be totally against my interest. I would never do that. I refuse to represent managers because I have players on the team. I don’t want to recommend a manager, and then have Bryce Harper come to me two years later and say, ‘How could you have picked this guy?’”

This past week, Mike Rizzo backed up Boras saying that he did not influence the departure of Dusty Baker who was replaced by Dave Martinez.

“It really doesn’t make me crazy because it’s laughable,” Rizzo told The Sports Junkies Wednesday. “Anybody who knows me from Day 1 knows it’s laughable that some outside force is going to affect what decisions I make. I make decisions for the long-term benefit of the Washington Nationals franchise. And I think we’ve done it as good or better than any franchise in all of baseball over the last six or seven seasons, and it’s no accident.”

Mike Rizzo and his staff will be busy this week as Rizzo lays much of the groundwork during the GM Meetings for potential trades and free agents. This year should be no different.