Exclusive: Local and national media weigh in on the manager(s) 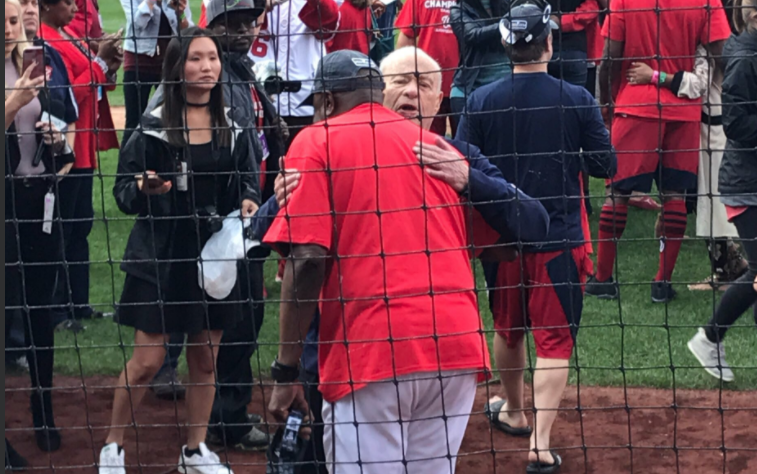 Photo by NavyYardNats for TalkNats

The talking heads have all weighed in on the Dusty Baker situation. The public opinion seems to be very different in Washington, D.C. then in other markets where Dusty Baker managed. Dusty Baker became a star in Washington, D.C. as fans embraced him after he replaced the unpopular Matt Williams. Baker finished his tenure in Washington winning two NL East titles and he repaired his reputation in baseball after he was fired by the Cincinnati Reds in 2013 and was out of baseball for two years.

MLB Trade Rumors did a poll regarding whether the Nationals should retain Dusty Baker. The poll had a large response of nearly 11,000 votes and it was almost split down the middle. Nearly 53% voted that Dusty Baker should stay and 47% thought he should leave. This poll was done before the ultimate decision became official last Friday. Some of the comments in their comments section are rough around the edges.

We talked to Holden Kushner who has a national radio show on MLB Tune-in Radio, and Kushner spent years in the local D.C. market on the radio and as a sports reporter on WUSA-9 and had many thoughts on the Nats managerial issues.

“Terry Collins, if they could get him away from the Mets ‘front office’ ”, Holden Kushner from MLB Tune-in Radio said would be his choice for the Nats new manager. “All he did was take a team to the World Series and then get them to a WC game with a rotation of Syndegaard, Colon, Gsellman and Lugo. The man is a winner and he would be a great fit for a championship-caliber team.”

Holden Kushner was 100% serious with that suggestion of Terry Collins. He also had thoughts on Dave Martinez who we believe is the frontrunner to be named as the Nationals next manager.

“Dave Martinez is a guy I got to know a little bit when he was with Maddon in Tampa Bay,” Kushner continued as another managerial candidate he likes. “Intelligent, relatable and overdue for a job.”

Kushner like most everyone else didn’t like the optics with the way Dusty Baker’s tenure ended with the Nationals, but Kushner also thinks the Nats need proven World Series veterans. The team still has Ryan Madson and Daniel Murphy who have played in World Series, but they will most likely part ways with Stephen Drew and Jayson Werth who were former World Series champs.

“Not renewing Baker’s contract is a bad look,” Kushner wrapped up his thoughts. “He’s the only manager to get them to the playoffs in back-to-back years. I think they need more veteran World Series winners than a new manager. The only “winner” on the team was Werth, who was out most of the year. Houston brought in McCann and Beltran and it really helped. Should have gone that route and kept Baker, although his “old school” playoff bullpen usage was something that needed to be addressed.”

We asked Casey Stern if there was some other reason undisclosed that the Nats changed their mind to bring Dusty Baker back. Stern is close with Dusty Baker as they worked together in the media and Stern considers them good friends. Some of the best interviews Dusty Baker has done in the past two years have been with Stern.

“I haven’t had a chance to discuss his departure with Dusty yet,” Casey Stern from MLB Network Radio Sirius/XM told us. “As it’s not an easy time for him, and I’ve been swamped covering the playoffs, I simply sent him a note telling him I was there for him. In talking to Dusty over the past two years, he was always listening to those in the organization and utilizing the information given to him. The idea that he wasn’t willing to do so is just a media driven and fan driven portion of rhetoric that made the story more palatable. But no, I don’t believe a word of that.”

Stern pondered where the Nationals should turn in the managerial search.

“I literally have zero idea where [the Nats] go, Casey Stern said regarding the managerial search. “I cannot see Joe Girardi, because he is so emotionally tied to his players in NY, that he isn’t going to want to leave and I don’t see the Yankees touching him, considering the fact that their team clearly rallied around his mistake in the postseason, and cares for him. Alex is a friend, and a terrific guy, and would’ve been great but I don’t know where they go now. John Farrell is worse at x/o than Dusty by a mile, guys like Joe McEwing, Mickey Calloway, others have no managerial experience, and with a team with SO much pressure to win in Bryce’s last year, I have zero idea where they go. THAT is what makes this move that much dumber. If they had Bruce Bochy ready to sign a contract, nobody would say a peep including me.”

Would it ever happen that an organization would admit they were wrong and reverse their decision? We asked Casey Stern if he could ever imagine the Nats rehiring Dusty Baker and luckily Casey didn’t laugh at the question.

“There’s no way after they did Dusty this way that a) the Lerner’s weren’t sure they wanted to go another direction and b) Dusty would come back tail between his legs to accept a deal. I think it’s disgraceful the way they handled this, considering the class he represented that organization with….but it’s the Nationals, so fill in your own blanks there.”

Stern gave his thoughts on the other controversial issues floating out there about Bryce Harper‘s relationship with Dusty and the public relations debacle of game 4 when Strasburg pitched but was ruled out the day before.

“Players don’t turn on a manager because their organization mangled the handling of a situation that nobody should’ve known about. When Matt Williams was there, that clubhouse was described to me as a morgue, and Dusty breathed energy, attitude and life into that group. The Strasburg thing was everyone’s fault but by FAR the most blame falls on Mike Rizzo, who is somehow Teflon through it all. That issue stems from the top. Once Stephen threw amazingly well, that story was over. As for Bryce, he was more concerned with his own failures costing his team that series than any managerial situation. If he plays to the level he’s supposed to, they win that series. Health obviously part of that.”

“As for the quote…if Bryce and the big bats came through, they’d win that series. I would hope everyone realizes that. I don’t think Harper was healthy so I get it, but when you’re a star, your standard is to be a star. He, Murph and others didn’t enough big hits.”

We also talked with Chelsea Janes of the Washington Post as she is a Nationals beat writer and she has some great insight into the situation. She does not believe that Dusty Baker lost game 5 by his decisions even though you could certainly question some of them. Game 3 is a slightly different story in a 1-0 game when Dusty Baker took out Max Scherzer who had a no-hitter through 6 1/3 innings and just gave up a double and was replaced by Sammy Solis in the 7th inning.

“I know what Dusty was thinking,” Chelsea Janes said about that 7th inning in game 3. “And I don’t agree with him. He thinks Solis is just as good against lefties as righties. In my mind you can’t get beat with Sammy Solis at that time of year because you have gotten beat with him before. That’s what happened in ’14 with Aaron Barrett, and you can’t get beat with those guys. When we asked him later about why [didn’t you intentionally walk Albert Almora] he said he didn’t want to put another runner on. ‘I didn’t want to put Almora on first and stoke that more.’ You just have to get that out. I think he always trusted Solis in a way that we all don’t. Yah, I think you are right, that’s the one [situation with Solis] that you look at and go ‘oh’  we got beat with our 6th best [reliever] not one of our big three [Kintzler, Madson, Doolittle].”

Chelsea Janes spoke to Dusty Baker starting Gio in game 5 “for redemption” which was Dusty’s reasoning why he started Gio Gonzalez.

“That’s just [Dusty] giving a reason. I think that is something people really get caught up in and we all know, and you know, and everyone knows it’s a Mike Rizzo organizational decision and what are they supposed to say ‘[Gio] is better than Tanner’? What is [Dusty] supposed to say ‘we don’t have anybody else’? I guess I’m just used to him giving reasons like the mold in Chicago, that’s just what he’s saying to say something which isn’t necessarily a good thing but we get numb to it.”

Chelsea Janes said on 106.7 radio this week, “I don’t think Bryce was Dusty’s biggest fan.” She explained in more detail what she meant.

“I don’t think [Bryce’s] ‘no comment’ said it all. Nobody was ripping line-ups off the wall. Bryce wasn’t yelling at Dusty. Nothing at all like that… Bryce isn’t around the clubhouse a lot anyways. There’s just no real signs of that. I think [Bryce] just sees alternatives is the best way to put it. He talks about alternatives, and he thinks about other managers and when other games are on he comments on them. He’s not out here declaring anything but he notices. He is someone who is deciding if the grass is greener elsewhere or not.  We’ve never heard him express gushing love for Dusty like [others]. I don’t think he is going to come out and say ‘I love Dusty’ when maybe he doesn’t have any real strong feelings isn’t something that is worth it for him right now. So that’s sort of how I interpreted it. I don’t see any actual animosity. I think if Bryce could pick his manager he would pick a more forward-thinking guy that kind of likes the youth in baseball.”

Chelsea Janes talked further about any possible intervention from Scott Boras into the Dusty Baker situation.

“I don’t know if there was ever a call or heard there was a call. I don’t think Mike Rizzo is the type to let Scott Boras bully him into anything.”

Chelsea also discussed that with the interviews she did with 106.7 radio and the Buster Olney Podcast that she was never contacted by the Nationals to retract anything.  Portions of the 106.7 interview are on the link in the Tweet.

"I don't think Bryce was Dusty's biggest fan." Did Scott Boras factor into Nats' decision to move on from Baker? https://t.co/LV13k67h6x