Three 2017 post-season managers now have severed ties with their 2017 teams, and another post-season team removed three of their coaches. Winning is paramount in Major League Baseball, and when it is all said and done — there is only one winning team and twenty-nine teams that did not win the World Series.

October has been national beat the shit out of Nats fans month. I now expect Girardi will go to the Phillies for $5 mil less than Nats offer

The issue is only 1 of those 3 teams actually fired their manager — and that was the Boston Red Sox. As the theme goes at USA Today, the headlines and accompanying story is very different. Dusty Baker and Joe Girardi had finished up their current contracts and only John Farrell was fired. Sure you can play the semantics game with the word “fired” as some would say. 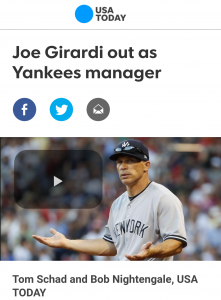 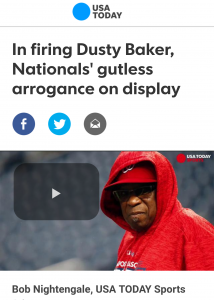 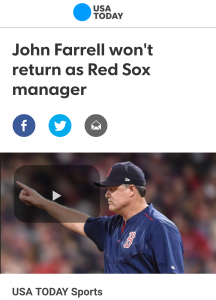 There continues to be a large disparity in the negative coverage of each change of managers. Managers all take the jobs knowing it is the N-F-L rule “Not For Long”. Dusty Baker once said you get hired to get fired as a manager. Few walk away from managing like Tony LaRussa did with the St. Louis Cardinals after winning the 2011 World Series.

“It’s getting more and more ruthless,” said a recently fired manager to Nick Carfado of the Boston Globe. “But you go into it knowing you’re probably going to be fired at some point. You’re hired to be fired. If the slightest thing doesn’t go according to plan, you’re gone. It’s just the way it is.”

Is it a DC thing or is it personal with Bob Nightengale? Nightengale was the first media scribe to attack the Nationals and then it was followed by Howard Bryant of ESPN and local DC writer Thom Loverro along with many others who chimed in with negativity.

“It’s a tough league,” Orioles GM Dan Duquette said about the trio of 90+ win managers who won’t be back with their teams next year. “You win over 90 games, win your division, get deep into the playoffs, and that’s not good enough. Every organization has their reasons — so you’ll have to ask them.”

The Nationals could have a golden opportunity to turn around the narrative and hire Joe Girardi, and if that doesn’t work we have been told from our sources that all signs point to Dave Martinez.

The noise will go away at some point soon until the next time as the microscope is on Washington Nationals GM Mike Rizzo who will reach the final year of his current contract in 2018.

In the meantime, Dusty Baker has gone silent, but why hasn’t anyone interviewed him for the numerous vacancies out there? It is a fair question to ask. If he is so great, why did he go unemployed for years from the time he parted ways with the Cincinnati Reds and hired by the Washington Nationals and also so far in this off-season.

We wish Dusty well, but something isn’t adding up here.

If you just go by managerial records, Dusty Baker has always had a great regular season record, but the clear point compared to Joe Girardi and John Farrell was the post-season failures in the Nationals “2 strikes and you’re out” recent record with their managers.

Never to keep quiet when asked, know-it-all politician Chris Christie from New Jersey spoke about Joe Girardi which included a swipe at the Washington Nationals players who as a group have a dismal post-season record of 0-and-4 in post-season series.

“The players really control whether a manager makes it or not,” said one major league coach connected with one of the managerial firings to Nick Carfado of the Boston Globe. “If a player doesn’t produce when it counts, the manager gets blamed or the coaches get blamed. They say why didn’t that coach or manager prepare that player for that situation?”

The old-saying is you can’t fire the whole team, but since players change from year-to-year it really isn’t totally fair what Chris Christie says anyway as the same was said about the Atlanta Braves and the Boston Red Sox and the Chicago Cubs until they finally won a World Series.

This entry was posted in CoachingStaff, Dusty. Bookmark the permalink.
← Previous Article | Next Article →