Winter’s Dream For A Baseball Fan 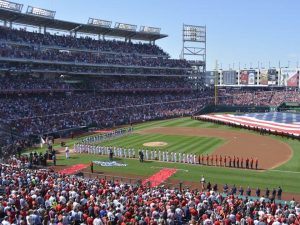 In our minds is an image that has been nurtured by the cold, dark evenings of an interminable winter.  Our young men bound out of the dugout wearing bridal veil white uniforms into the blinding sunshine set against impossibly green grass and an azure sky.  While this is the staple of myriad games to come this one instance marks a threshold.  It’s Opening Day.  There will be special games in the offing, to be sure.  But, there won’t be one of these for another year.

We divide our calendar year neatly into four equal segments.  While this is wonderfully symmetrical in organization it doesn’t reflect the realities of either the climate or our life experiences.  The year actually divides along two unevenly divided digital hemispheres.  It’s shorts or slacks, open-toed footwear or shoes, air-conditioning or wood stove. The list goes on ad-infinitum.  Add one more to the list:

Summer and winter are our dominant seasons.  Spring and autumn fill the voids in an uneven, transitory, and unpredictable fashion.  No month is more demonstrative of these characteristics than April.  It is reminiscent of a pot of soup just being started from scratch that was left alone before being stirred.  All of the ingredients are there.  However, nothing has melded.  Much like the gangly awkwardness of adolescence we find swings in mood and demeanor that defy the imagination all awash in a glorious absence of any common sense.  Into this short-lived sea of unpredictability we launch our season.  If you never froze your fanny off at a baseball game there’s a good chance it’s because you have avoided going in April. 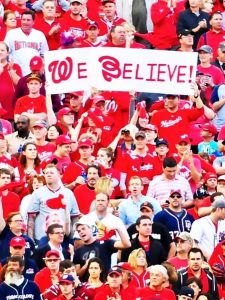 Despite its shortcomings April marks the point of new beginnings.  As trees bud into green and azaleas strain for their fortnight of glory we emerge from shelter to embrace the outside.  The sun wins.  It always does.  The end of the month has 70 more minutes of sunlight than the beginning.  The difference is more pronounced and sensory than the math would suggest.  Such an important month deserves an auspicious start.  Opening Day is not only worthy of the honor, it is an intrepid moment.  For one day baseball has all of the short-term focus reserved for football’s biggest games.  After that, the long view takes over.  Few organized activities are more quotidian.  A baseball season is 162 games.  That should break down elegantly to 27 weeks of 6 games per week.  It doesn’t, however, as the schedule is compressed to 26 weeks.  If that number, 26, sounds familiar, it should.

In ancient times, on the Plains of Marathon the outnumbered Athenians successfully repelled the invasion of King Darius I of Persia.  According to the legend the Greek commander Miltiades dispatched his messenger Pheiddipedes to run to Athens with the joyous news.  Having run some 25 or so miles without pause the messenger burst into the assembly chamber to announce “Nenīkēkamen!”  (We have won!”)  He then promptly collapsed and died.  There is scarcely a person who has laced a pair of running shoes who is unfamiliar with the story.  From this tale, tall or not, has sprouted the modern marathon run which is set at 26.2 miles.  Baseball seasons equate at one week to the mile.  The correlation is linear.  When players say that it is still early in late May (Week 7) they aren’t kidding.

In a long run there are many factors, but none is more important than rhythm.  It’s all about settling into a space where it all seems to happen on its own.  Projecting will cause panic.  Panic destroys rhythm.  Lose rhythm and you lose it all.  At about mile 8 in my first marathon I came up on an old-timer.  He told me to slow down and hang with him for a while.  I did for a few minutes. But, I had a schedule to maintain and slowing down to chat with Pops wasn’t on it.  As I started to pull away he said, “Just remember, it’s a long way to 26th Street.”

Fandom, of course, is exempted from such patience and perspective.  Channeled fanaticism always dismisses those two virtues as abstract curiosities.  April and May will be filled with sugar highs and manic crashes.  Slowly we will arc to the Dog Days, when Sirius the Dog Star will rise with the Sun.  The Romans thought that Sirius and the Sun combined to produce the hottest days of the year. Named for the star the Dog Days mark the first real buoy in open water.  It is a worthwhile touch point today as the boat slips from the pier.  That marker will provide a full sense of where we are headed.  Perils will abound until the end, of course.  What worthwhile journey exists without perils?  We have much time to stew about their potential.  But, none of that matters right now.

This moment is when winter’s dreams become realized.

It’s time to take the field.

This entry was posted in Feature and tagged Washington Nationals. Bookmark the permalink.
← Previous Article | Next Article →