The Barrel – A New Stat to Watch, Courtesy of Statcast and Tom Tango

Any Nats fan who has listened to Anthony “Tony Two Bags” Rendon talk about hitting knows what “barreling the ball up” means.  TTB talks about that as his goal in just about any situation – making solid contact with the barrel of the bat, yielding gap to gap power and timely hits.

Want another example with an even more famous sideline reporter?  Ok sure. Here is another Anthony Rendon video.

It’s a perfect image for a stat dedicated to the solidly struck baseball – the Barrel.

The Barrel is a recent addition to the analysis that can be done using MLB’s Statcast measurements. And a welcome addition it is.

Loyal TN readers probably remember many discussions during the 2016 season of Ryan Zimmerman’s hitting woes.  Some spent much of the season expecting Zim to snap out of it because, according to Statcast, he was hitting the ball really hard.  Even the legendary Tom Boswell in a chat in September fell victim to this triumph of hope over experience:

“MLB now measures “exit velocity” off the bat. It is every bit as accurate as velocity in m.p.h. for pitchers — and NOBODY doubts that. There’s one difference. A pitcher’s fastball may be “too straight.” So it may not really be a very good fastball at all. But a batted ball with high velocity is just plain good.

“Zimmerman ranks 18th in MLB this year on Exit Velocity — 93.5 mph. That seems impossible. But it is a fact. Two players who are in the race for A.L. MVP are on either side of Zimmerman in Exit Velocity — David Ortiz (93.9) and Josh Donaldson (93.2).”

It didn’t take much to see the weakness in Boz’s argument, and the error in saying, “a batted ball with high velocity is just plain good.”  Sure, hitting the ball hard is better than hitting it softly, but a hard hit ball that goes straight up is just a major league popup, and a hard hit grounder might sting the hand of the fielder who scoops it up, but it’s still an out.

Last year, Baseball Savant started publishing stats on “batted ball events” and it seemed pretty clear that the missing link between a ball with a high exit velocity and a successful AB was launch angle.   I looked at the stats of Zim and Murph midway through this season since they were both hitting the ball hard, but the results they were getting were so different.  I began experimenting with a hypothesis that a baseball hit over 100 mph with a launch angle between 19 and 36 degrees had a very high chance of becoming an extra base hit. But I was stymied by my lack of statistical expertise, and the task of analyzing hundreds of BBEs to confirm and fine tune that hypothesis seemed overwhelming.  So I gave up.

Enter Statcast and Tom Tango with the new stat – the Barreled Ball.  The definition is worth reading in full. 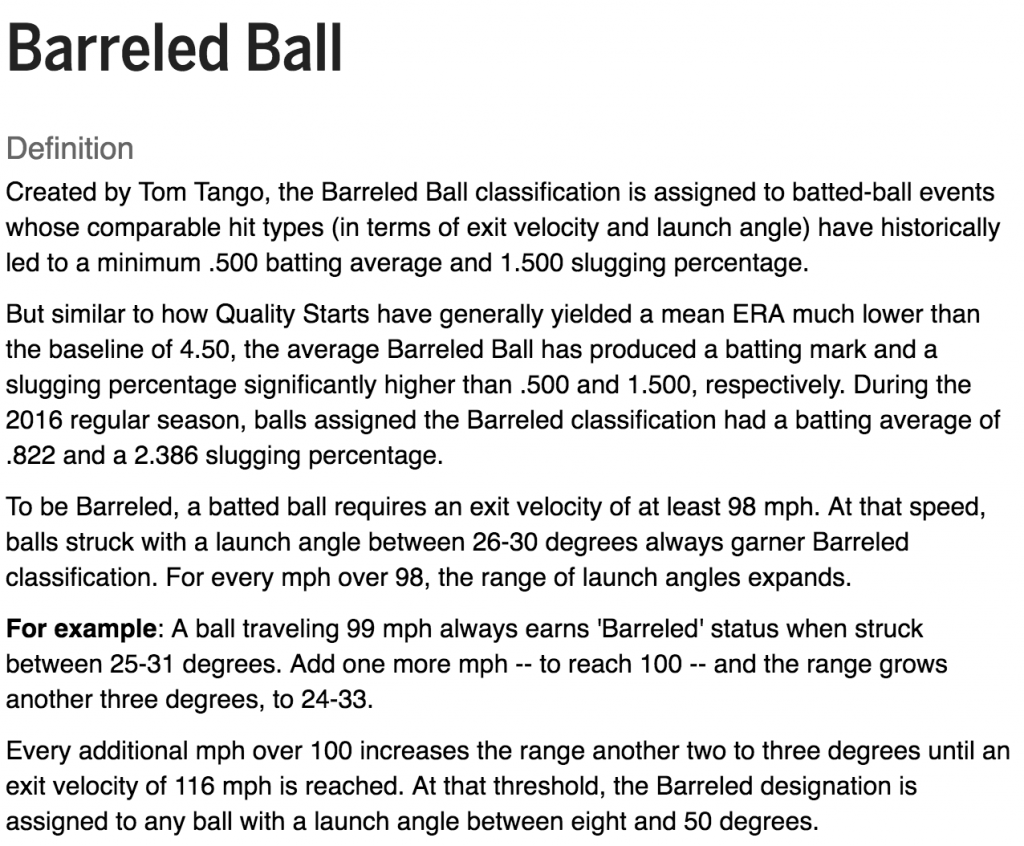 This makes a whole lot of sense.  The harder a ball is hit, the more “give” there should be in launch angle that would turn the crushed ball into a good result for the hitter. A 110 mph shot is more more likely to get through the infield, either by finding a hole or by eating a fielder up, than a ball hit at 98 mph.

And with a full year of stats to work with, it seems that Barrels is a very fruitful stat to analyze.  The Statcast Leaderboard shows the raw numbers and also what I’ll call Barrel Rates, both the percentage of BBEs or of PAs that result in Barrels.

Not surprisingly, despite his high average exit velocity, Zim appears nowhere near the top of the leaderboard for Barrels (23) or Barrel Rates (Brls/BBE – 8.0%, Brls/PA (4.9%) .

But this is not a post to bash Zim.  I just hope that Boz and other writers will discover Barrels this year and abandon the use of average exit velocity as a predictor of performance.

Barrels is not a perfect stat by any means.  Ryan Howard fares well in the Barrel Rates, as does Byung Ho Park.  But the leaderboard generally reads like a who’s who of the biggest power hitters in the game.  Here’s a list of the 13 players who had more than 50 barrels last year:

Not a bad group.

On the other hand, guys who hit for average don’t necessarily barrel the ball up at the same high rate.  Daniel Murphy, who had 184 hits, had 39 Barrels, just 8.9% of his BBEs.   DJ LeMahieu, who just eked out the battling title over Murph, had 192 hits but only 20 Barrels, just 4.7% of his BBEs.  Not surprisingly given Murph’s greater number of Barrels and  higher Barrel Rates, his SLG of .595 was quite a bit higher than DJ’s still not too shabby .495.  But even though his SLG was second highest in all of baseball, Murph was tied for just 35th in the total number of Barrels.

And what of our favorite hometown barreling up guy?  Looks like TTB has a ways to go to master the stat that comes from his favorite expression.  He had 25 Barrels last year, with Barrel Rates of 6.3% of his BBE and 3.9% of his PAs.  Both rates are worse than Ryan Zimmerman’s.  Go figure.

Feel free to play around with the Statcast leaderboard for players with over 100 BBEs, and leave your interesting discoveries or theories in the comments. One thing you can do with the Leaderboard is click on a player’s name and see every batted ball that Statcast measured for that player.  Videos are available for some of them.  So check out the hardest hit ball in the major leagues this year — 123.9 miles per hour by none other than Giancarlo Stanton.