A talk about Dusty Baker and the Nationals 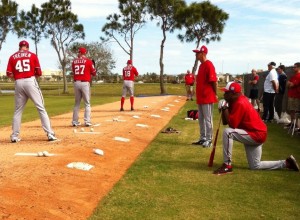 We decided to do another chat, and this time we have freelance writer Alex Yalen who is often seen on TalkNats under the name Sim Alex. We thought we would discuss Dusty Baker.

Me: What a great opportunity to talk with Alex Yalen about our Washington Nationals. I figure we can start to talk about what I called [in the past] “The Dusty Effect” which was the big improvement Dusty would bring to his new teams. Here is the good news, the improvement continued in the second year for Dusty’s teams if you exclude 1994 which was a strike shortened season. If you look at the Cubs and Reds second seasons with Dusty you have a combined 3.08% improvement. If Dusty can improve the 2017 Nationals by that same 3.08% then we are looking at a 98 win team!

Whenever you watch a manager or a player for 162 games and the post-season there is sure to be things that can tick you off. Personally I thought Dusty’s in-game management was better than expected but a few things that I did not like was what we were warned about with Dusty and that was the “stuborness” such as sticking with the [same] lineups that weren’t working and his almost insistence and defiance with MAT who he played and left in leadoff when there were alternatives. Putting Taylor on the post-season roster to me was not right as he didn’t earn it and I think he took Sean Burnett‘s spot.

What did you like about Dusty and anything that got you down?

Alex: Overall I was impressed with Dusty. I think he brought life to the team. A sense that there was a human being running the ship. I think that the manager has to communicate not just to the team but also to the fans. I think coming off of a 2015 that was infuriating for a variety of reasons, that kind of person and those kind of skills were particularly important for 2016 and he really came through, in my opinion.

His use of the bullpen struck me as being a plus. I thought he (and Mike Maddux) did a great job playing match-ups as much as possible. I thought he did rotate the bench guys in & out of the lineup well– Chris Heisey was a nice find, glad he’ll be back in ’17.

As a matter of tactics I’m friends with some Cubs fans who were, semi-jokingly, telling me that Dusty was the worst decision-maker Of All Time and I really didn’t feel that way, in general.

You’re absolutely right about MAT being left in far too long. The early overuse of Felipe Rivero was pretty strange and bad. And if I recall correctly, Max Scherzer also went pretty deep into some games late in the year where I was like, “really?” I might have been more conservative with his innings there. But on balance I thought he really handled the entire pitching staff very well. Oh– I thought he should’ve been much more aggressive pinch-hitting for Danny in the playoffs.

But I think he’s a good manager for this team, and I thought he did a fine job in 2016.

Other than being less “stubborn,” is there anything you’d like to see Dusty do differently in 2017? Be less stubborn? Ha.

Me: Less stubborn will be tested again this year. How much rope will Dusty give a struggling player? We can’t wait for the warm weather.

Thanks for reminding me about the use of Felipe Rivero. He started off great and really fell off.

You’re right that he brought life to the team and many players responded well. There is that second year thing with Frank Robinson, Riggleman, Davey, and as we all remember with Matt Williams [Note: Manny Acta never had a first year thing]. Dusty has to change this and has to get the best out of this team [in his second season managing the Nats].

What did you think of Dusty losing his cool on the question about replacing Espinosa in the playoffs? To me it put the writing on the wall that Espi couldn’t play for Dusty going forward.

Alex: Less stubborn will be tested again this year. How much rope will Dusty give a struggling player? We can’t wait for the warm weather.

We absolutely, definitely, certainly cannot. Which brings to mind Ryan Zimmerman. A team with championship-caliber hopes can’t wait all year for a negative-WAR player to turn it around. Joe Maddon started Chris Coghlan over Jason Heyward when it mattered (in the playoffs at least.) No doubt a painful and difficult decision but that is the “type” of move that wins titles and if I can propose one franchise “key question” for 2017 it’s whether Dusty will be able to pull the trigger on a major move like that should Ryan be a negative-WAR type of player in June or July.

Do you think there is any chance of Werth playing 1st? Or Murphy? Or even Norris? This is where Adam Eaton and Trea and all that “positional versatility” is great, but Dusty has to be open to moving parts around, too.

To answer your question on what I thought of Dusty losing his cool on the questions about replacing Espinosa in the playoffs, to me it put the writing on the wall that Espi couldn’t play for Dusty going forward.

I’d lost my cool with Espinosa a while back at that point, so… in all seriousness Danny did a great job of losing his job. His approach never wavered and it produced exactly the results that one might expect: poor contact and on-base numbers, a pretty meager slugging, and a bunch of home runs. It’s not like Danny didn’t have chances or opportunities. I was a little disappointed tho not surprised that Trea Turner did not supplant him at shortstop. I thought he should’ve, but then again, he looked pretty good in centerfield for someone who’d played it for, what, a week?

Question, not to change the subject, but this is on my mind of late: What can we expect from from Stephen Strasburg in 2017? A full, 200 inning year is the ideal and how I hope it comes to pass– but… Man, his 2016 was amazing until it wasn’t, and it was just really hard to watch it unravel there at the end.

Me: So true on Strasburg. He was on a record pace for starts earning a Win. I’m concerned about every player and if Strasburg and Joe Ross weren’t injured last year, Lucas Giolito and Reynaldo Lopez wouldn’t have been thrown to the wolves.

The cascading effect was huge. The Cubs rotation was healthy all year and somehow Maddon managed their innings well to save them for the postseason. Roark was pushed to a career high for innings and Scherzer was going for it even on the last day of the season. I was sounding the alarms in early September. Scherzer had not performed well at the end of the season on regular rest.

You could see the difference in Scherzer’s game 5 start with an extra days rest to see how much better he was.

So yes, we are counting on a healthy Strasburg and Ross but I also don’t want to see the other starters being pushed too hard.

Everything in a proper balance. I’m happy that Scherzer won 20 games but I would have been happier with a Game 1 ace performance from Scherzer.

I’m a big believer in cause and effect.

Lester pitched 202, Arrieta 197, Hendricks 190, and Lackey 188. Contrast that with Scherzer 228, Roark 210, Gio 177, Strasburg 147, and you see the big unbalance.
To me team goals always have to be put in front of individual goals. When Dave Roberts pulled Rich Hill early from a no-hitter I applauded him.

Can Dusty do any of that or as a player’s manager does he not see the big picture or am I just wrong on my thinking?

Alex: Dusty’s commitment to “his guys” is really honorable and noble in a very old-fashioned way. It’s great, until it isn’t. I really hope we see much more balanced pitcher workloads in 2017.

I heard Mike Maddux (I think, at winter fest) say that the 5th starter spot was an open competition–including for Erick Fedde. That was surprising, hearing that name. I definitely see him as a pitching wild card in 2017 but earning the fifth starter job out of spring training? That seems like a stretch to me. But what do I know–he had a terrific 2016. If he comes on big, you never know.

At any rate Fedde could be a factor in the bullpen, too.

Is it weird that I’m nostalgic for the days when I had Reynaldo Lopez penciled in as our next big pitching thing?

Don’t get me wrong, though. I am thrilled, t-h-r-i-l-l-e-d, that we’re going to have Adam Eaton and Trea in the same lineup. Holy mother of base-running.

Me: Fedde could definitely be up in June and beyond.

It almost seems ironic that here we both said we like Dusty but yet there are areas to improve. I think you can like 90% of a manager yet disagree with 10%, right?

I would say over-playing the guys is my #1 biggest issue. Again I didn’t see the need for Scherzer to pitch the final game of the season. It meant nothing but personal padding of the stats. He was still going to win the Cy but wouldn’t have won 20 games.

Alex: I would give Dusty a four of five star review on Yelp, for sure.

I would give Rizzo four of five stars too. Man, I -still- I wish we added Charlie Blackmon last year. I wish we’d kept Melancon or gotten Jansen, but Jansen had his (very good) reasons, and Melancon took more money than we had available, I guess. Here’s to hoping our young pitchers like Voth and Fedde emerge in the spring– and here’s to hoping Joe and Stephen can stay whole all year long.

Next up: not adding Matt Wieters. Greg Holland is mildly intriguing. Wieters gets a hard pass from me, tho.

Me: This was fun. Anything you want to plug. I will plug Rocco Taco’s in West Palm Beach LOL

Alex: Yeah, I’ll plug a place in LA called Priscilla’s Cafe. It’s in Burbank. I know none of us are out here, except for me, hahaha, but if you take, like, Cheer’s, just for coffee and tea and deserts, that’s what Priscilla’s is. Amazing little place.

Also, I’m hoping to do a West Coast Nationals Road Trip in 2017, follow em up and down the coast, if time & money permit. Big ifs there, but I’ll keep you posted if i do it.