What I think the Nationals should find in their Christmas stockings

Posted on December 24, 2016 by ArVaFan aka Laura Peebles 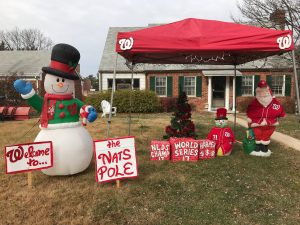 What I think the Nationals should find in their Christmas stockings:

Max Scherzer: run support so he can get his 20 wins a week or so earlier and rest up (just a little) for the post-season. And a hanger. Because if you hang up your jerseys, your wife is less likely to throw them away.

Bryce Harper: a MyPillow. Must avoid stiff neck this year.
An empty 2017 trophy shelf. (But it has little “reserved for” signs on it.)

Ryan Zimmerman: a new swing. And I don’t mean one for his backyard next to his daughter’s expensive playhouse.

MAT: baserunning instincts. Oh, and a bat with some hits in it, because you have to be on base before baserunning is relevant. A shorter swing would help also come to think of it. He needs a lot.

Daniel “Hits” Murphy: just a few more hits than the next guy, so he can win the batting title he deserved in 2016. LeMaheiu gets coal by the way. Also Daniel Murphy gets a new FWAHHH designed shirt.

Tanner Roark: Santa’s not bringing him anything, because with that arbitration award, he can buy it for himself! Finally a big pay day for Tanner!

Gio Gonzalez: A framed photo of Jonathan Papelbon (in “glare” mode) to go in his locker for Spring Training. Because no one else except the DC Strangler has been able to get Gio to focus and do his drills.

Trea Turner: Mercury-the-god wings for his shoes, so he can set a new Nationals’ stolen base record. Can Under Armour make those for him? If not I know the custom clear guy at Nomad can. Bryce has his contact info.

Shawn Kelley: A silly, joyous opportunity to bring out that horse head.

Lucas Giolito: Because we still care about him, a case of whatever it is that Joe “Cool” Ross drinks before pitching. Good luck with the White Sox.

Danny Espinosa: New fences and a clear batter’s eye  to swing for. Oh, wait Rizzo got him those already! OK, snazzy sunglasses for LA!

Jayson Werth: Shoes with hidden springs in them in case he needs to make any spectacular catches at the wall. And a first baseman’s glove. Just. In. Case.

Joe Ross: Stamina and good health. Because he’s got everything else.

AJ Cole: Opportunities to pitch that don’t involve injuries to others.

Ben Revere: A new contract to join Danjy, with a chance to win Comeback Player of the Year.

Clint Robinson: A new batch of bats, and plenty of opportunities to use them effectively.

Tony: A case of of that Pomade that Bryce uses on his hair. Seriously, how were you keeping all that under one baseball cap?!

Derek Norris: Some extra bats. Because we believe you’re going to actually need them this year (and not for firewood—see Spencer Kieboom).

Kieboom Brothers: some real firewood. Guys, you’re going to run out of bats before we run out of winter, even with global warming. Plenty of flour and baking ingredients. A “find me” beeper for Carter Kieboom so Spencer knows where he is at all times.

Adam Eaton: A welcome to DC kit:
Directions to good restaurants (hint: the best deep dish pizza is still in Chicago),
Instructions on how to ride the Metro (walk on the left, stand on the right, expect delays); Cleats for at least 15 steals. Stats good enough to make Rizzo look like a genius. Airline tickets for Miami for the mid-summer classic to be a participant for the first time.

Blake Treinen: Zen for the heartbeat and a scowl to look mean like Pap when you are on the mound. We might need you as the closer.

Koda K: We don’t know you well, hoping you get something sweet.

Victor Robles: Wrist guards like Jayson Werth has. You are our #1 prospect now. Wrist guards made of that indestructible stuff they use for airplane black boxes.

Dusty: A case of toothpicks and a jar of luck. Same as last year, except that this year, that jar of luck will be marked “Do not Open until September 15” because last year he opened it early and used it all up before fall.

Rizzo: A closer. [no, I don’t know who it is. The box was addressed to Rizzo and I don’t dare open it!] Vindication for the  Eaton trade so you can make Jim Bowden look like an idiot (again) for his comments about the trade.

Expectations. This is the DC sports team that is finally going to get out of the first round of the playoffs!

And for those of you who might have missed a Christmas Carol parody, here’s the lot of them.

Murphy the Hitter [Frosty the Snowman]

Murphy the hitter was as good as he could be.
And his teammates say he can laugh and play
And that goes for MLB.
Murphy the hitter has had hot streaks on some days
So he said let’s run and have some fun before the final day.
Up from the dugout, with a boom-stick in his hand:
He’ll be running hard all around the yard,
Saying catch me if you can.

Tony, the Comeback Player [Rudolph]
Congrats to Tony Two-Bags: Comeback Player of the Year!
He’s always been a player who Nats fans have been glad to cheer.
In ’15 he played injured, even lost his trademark smile.
’16 was so much better: he came back, as did his style.
Didn’t come to Winterfest and we don’t know why.
Hope Rizzo hasn’t traded him—lots of fans would cry!
We’ll see you in the Springtime as the grass is turning green.
Have another year of awesome; make history in ’17!

Oh, Rizzo how’s your closer search? Guess you’ve missed out so far.
Will you now look at second tier because you’ve missed the stars?
Or will you just stay in-house, and trust the bullpen arms?
Or wait until July and then, cash in more of the farm?
We’d loved to have Melancon, on Chapman I’ll say “pass.”
Then Jansen would not sign with us; he wanted greener grass.
We know you’re always working, the Nats team to improve.
With Christmas cheer we’re biding here, awaiting your next move.

I’m dreaming of a World Series
Quite like the one in ’24.
With the Nationals in it, they actually win it.
I’ve had that dream before.

I’m dreaming of a World Series,
While Bryce and Jayson are still here.
That would be so pleasing: I’ll not mind freezing.
I’ll stand the whole game through, and cheer.

I’m dreaming of a World Series,
That’s a parade that I would see.
Next fall would be merry and bright
Just to have that trophy in DC!