#Nats clinch a at least a 5 win road trip in the 10 game AL/NL Central trip: Postgame

The Nats set out on this road trip with high expectations against the top teams in the Majors when you consider that the Cardinals had a winning record before the Nats arrived in St. Louis and the Nats swept them plus the Nats just won 2 of 3 to take the series against the reigning World Series champion Royals. The Nats will now travel up north to Illinois to take on the Cubs who are just ahead of the Nats for the best record in the MLB.

Stephen Strasburg was spotted a 6 run lead in the top of the 1st inning and only gave 2 back against a very good Royals team. Strasburg tallied 7 strikeouts against a team that rarely strikes out. Yusmeiro Petit relieved Strasburg and covered 2 innings, and Blake Treinen got to pitch in front of his hometown family and friends to finish it off.

The Nats took advantage offensively of Royals errors and other miscues and had the best RISP hitting of the season at 8-15.

The Nats improved to a 19-8 record which is 1 win behind the Cubs. This series in Chicago is a 4 game series, and these teams will get to know each other quite well.  Ben Revere will be activated on Thursday or Friday, and Dusty Baker will have his “A” line-up.

Daniel Murphy is now batting .398 after a 4 hit day which was short of a cycle by the elusive triple, and Wilson Ramos had a 3 hit day raising his vision improved  BA to .364 and a .918 OPS. Bryce Harper got RBIs 25 and 26 today as well as HR #10. Ryan Zimmerman added 3 more hits and got his OPS back over .700. Based on bat exit speed he had a single that was clocked at 104mph. 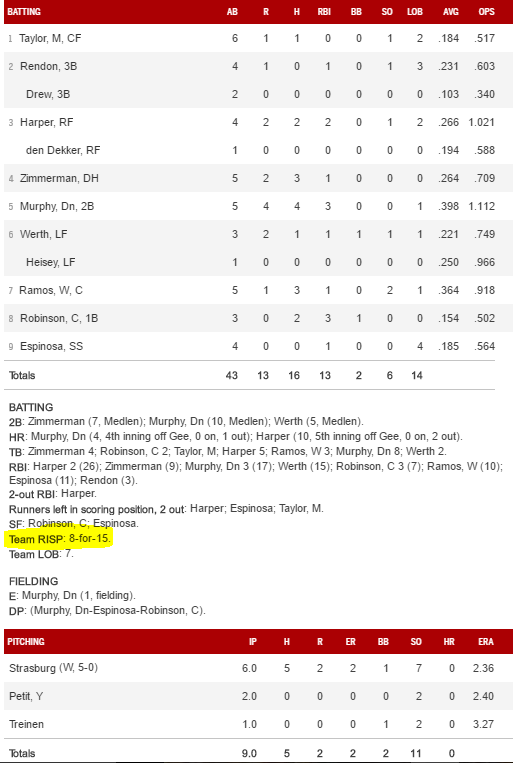 Murph and the #Nats hang 13 on the Royals and move to 5-1 on their Midwest jaunt. https://t.co/KMPxwsm5pA pic.twitter.com/b1DCwUoIRh