Daniel “Hits” Murphy is ‘en fuego’ and a WAR machine

His given name is Daniel Thomas Murphy, and he likes to be called Daniel, not Danny, Dan or Danny Boy. Murphy was born on April Fool’s day, and the funny thing is the joke is on those fools who doubted him. Murphy is so humble that he won’t even say “I told you so” to those who questioned his potential. People have been questioning Murphy’s baseball abilities since Little League, and even Murphy has done an introspection on his own abilities.

Murphy had recently said, “I didn’t think I would make it to the Major Leagues.” Daniel Murphy did not elaborate on that statement even though he was asked why he would say that. His self-doubt probably started when he wasn’t drafted out of High School, and the only college that came calling was his local school. Murphy enrolled at Jacksonville University of the Atlantic Sun Conference which is a non-football conference in Division I, and when Murphy was drafted as the 394th player overall in the 13th round out of college by the NY Mets, he knew that very few 13th rounders make it to the Major Leagues and even fewer become stars. In fact, being the 394th pick in the draft had always been a black hole as only two 394th picks before him ever made it to the Majors, however their combined MLB service time was 11 games total. The 395th pick in the draft at least had an impressive history with Mike Stanley, John Moses and Marv Foley as long-time MLB alumni. Murphy made it and has thrived, giving hope to all future 394th draft picks. 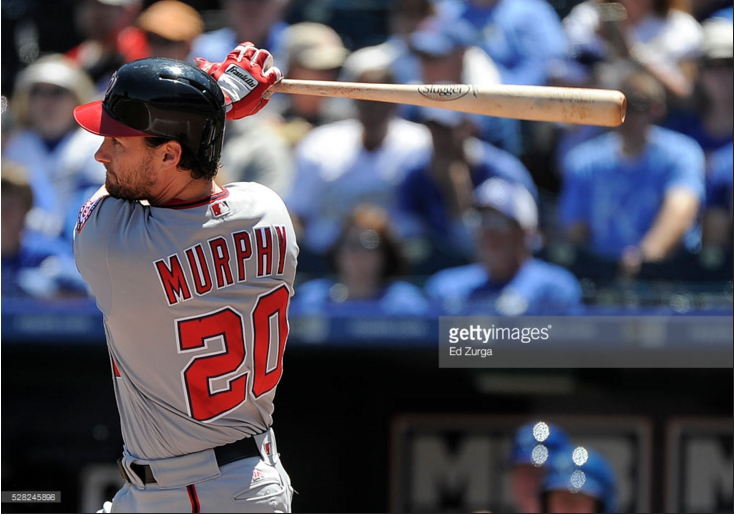 When Murphy became a Free Agent after the 2015 season, only the Nationals mounted an offer strong enough to get Murphy to sign the deal, but it was not a large contract compared to those with similar stats.

Murphy does not do social media so you won’t find him on Twitter, Facebook, Instagram, or Snapchat. Murphy does not do much outside of baseball except for being with his family. Baseball and family are what Daniel Murphy is all about, and he loves being a father to his 2 young children.

Murphy recently told a friend that when he started feeling comfortable in New York and spoke up he was criticised, and would rather just do his thing and fly under the radar. When Murphy took paternity leave for the birth of his youngest child a year ago, he was sent hate mail. It was difficult to fly under the radar in New York, and much easier in Washington DC. Murphy has found peace and serenity in his new city.

When Murphy became the first player to homer in six consecutive playoff games, he broke the record of five set by Carlos Beltran  the Houston Astros in 2004, and more importantly,  Murphy was the bulk of the offense which propelled his New York team into the World Series last year.  Murphy was on the cover of every New York newspaper after his epic run, and you would think that performance would enhance his free agency prospects with the big payroll clubs like the Dodgers and Yankees who clearly seemed a fit. Nope, the Dodgers re-signed Utley and Howie Kendrick, and the Yankees traded for Starlin Castro.

Where did Murphy break that home run record? Wrigley Field against the Cubs on October 21, 2015. Tomorrow will be the first time Murphy will be back in Wrigley Field since that HR record was set.

Today Murphy had one his best days as a Washington National. He went 4-5 and was a triple shy of hitting for the elusive cycle. Murphy’s WAR (Wins Above Replacement) is at 1.6. Some players wish they had that total by the All Star break. Murphy for his entire 2015 season finished with a 2.5, and all the projection services like Steamer and ZiPS had him projected to finish 2016 with a regression to a 2.2 WAR. If you believe Murphy can stay at this pace for all of 2016, Murphy would finish with a 9.6 WAR and win the NL MVP most likely. After Murphy’s 4th hit today, his batting average increased to over the .400 mark.

While Daniel Murphy downplays all of the accolades thrust upon him, he has not received any player of the week awards or receive any calls from Madison Avenue for endorsement deals or offers to do TV commercials.

Daniel Murphy had this to say after today’s game, “The numbers on the board are [my] best start. I don’t know if it’s the best I’ve ever felt. I try not to explain it too much.”

Flying under the radar……….

This entry was posted in Murphy. Bookmark the permalink.
← Previous Article | Next Article →