We learn now that Tanner Roark will start instead of Stephen Strasburg against Matt Wisler.  Strasburg was officially scratched the Nationals are reporting due to illness.

This shouldn’t change the Braves line-up as they were preparing for a right-handed pitcher. Roark last pitched on Thursday which was the Nationals’ home opener which means Roark is pitching today on regular rest. Roark threw 99 pitches in that game and was scheduled to pitch tomorrow against the Braves.

The key for Roark is to get off to a good 1st inning and allow his arm motion to be free and easy and be concerned more with movement and location rather than velocity which has put him in trouble in the past. Roark is more of a finesse pitcher than a power pitcher. Does Roark have the ability when he needs it to throw mid-90s gas in a reach-back fastball? Yes, but use it strategically.

What that means for tomorrow’s 4:05pm start is either Strasburg will take that start or it will have to be a bullpen game with Yusmeiro Petit getting the start against Julio Teheran or the Nats will have to make a roster move.  Stay tuned on this.

Lineup (subject to change) and changes we have been told as Stephen Drew will replace Anthony Rendon for a scheduled rest day and now we learn that Ryan Zimmerman is also out and will be replaced by Clint Robinson, and we already updated for Roark replacing Strasburg who has the flu.

Roark may not want to throw A.J. Pierzynski curveballs in the middle of the plate. AJ is 6-7 career against Roark and as we looked at what AJ was hitting it looked like mistake locations. This curveball was hit out for a HR. 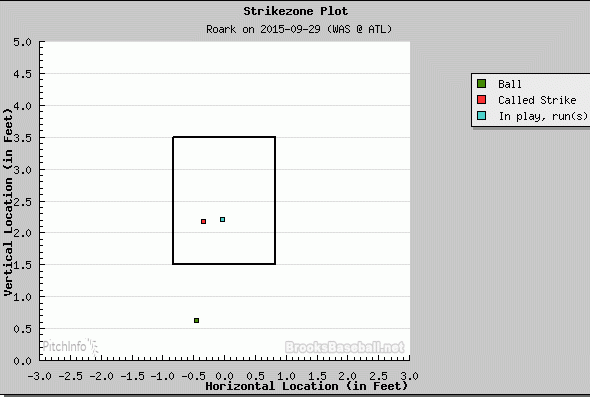 Here is the other HR that Pierzynski hit off of Roark. It was a sinker that didn’t sink on the middle of the zone on the outside. 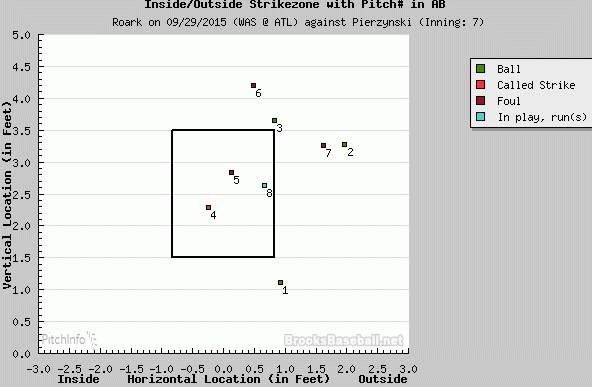 This entry was posted in InGame, Strasburg. Bookmark the permalink.
← Previous Article | Next Article →