Spotlight on Matt den Dekker of the Washington Nationals

When Matt den Dekker was traded to the Nats last year at the very end of Spring Training, it was a surprising trade with the Mets for Jerry Blevins. You usually don’t see division rivals helping to fill the other team’s needs like the Nats did getting the Mets their coveted lefty specialist.

Den Dekker remains a below the radar player for the Nats. We like to call him ‘MdD’ and his official nickname is ‘Upper Dekker’ which we used to think was an oxymoron, however, the nickname works as he has deceptive power. Den Dekker doesn’t have ‘light tower’ power, but he has shown that he can hit them far and deep like he did with the game winner last year on July 17th in a pinch-hit 2nd deck HR to beat the Dodgers. MdD appeared in 55 games last year for the Nats and finished the season with the coveted 800 OPS, and his full slash against righty pitchers is very good at .267/.330/.512/.841. It was very encouraging as we have likened him in our scouting to Nate McLouth, and consider MdD as the type of player who would run through a wall for you just like McLouth. MdD has that gritty personality and just does the little things to set himself apart from other players in the organization.

Den Dekker’s game winning RBIs in Game #2 had a great back-story about how Den Dekker arrived at Turner Field shortly before his big pinch-hit became part of reality. MdD got the call-up to replace Ben Revere who landed on the DL, but this was on short-notice as he had to get from Syracuse leaving at 2:30pm and get to Atlanta on a 5pm flight which wasn’t easy. MdD got off his plane and arrived in the 5th inning of the game in time for his 7th inning offensive heroics.

“Sitting in snow in 20° weather  and then Billy [Gardner] told me I was coming up for Ben [Revere],” Matt den Dekker said is how he found he was getting a call-up. “Great to come in here and help the team win. You just never know where you are going to be and where you will be able to help the team out.”

Who needs BP, right @UpperDekker? Fresh off a flight, right into a pinch-hit go-ahead double! pic.twitter.com/n4p83sEz4Z

MdD was a Westminster High School teammate with Michael A. Taylor and MdD is a cousin and Westminster High School and University of Florida teammate  with Astros pitcher Kevin Chapman. Matt and Kevin are cousins on their mother’s side as their mothers are sisters. Matt’s father, Gerrit den Dekker, was actually born in the Netherlands before emigrating to the United States which also lends that Dutch authenticity to his name, and Matt’s generation is showing that baseball is becoming a family sport which is unusual for a family where den Dekker is the first generation born in the United States from European roots in a country where soccer is the most popular sport in the Netherlands, with field hockey and volleyball as the second and third most popular team sports according to Wikipedia.

One thing for certain, Matt den Dekker and his cousin make up a small fraction of family members who play Major League baseball. Matt started playing t-ball at the age of 4, and played baseball, basketball, and golf at Westminster High. While you might think basketball wouldn’t fit den Dekker, he is 6’2″ tall and very athletic. Height runs in den Dekker’s family as his brother is 6’5″. While MdD might look smaller on the television, he is actually a big boy and can muscle the baseball into the Upper Deck!

How long Matt den Dekker sticks around on the roster is a great question as this could just be a 15 day stint as MdD could be gone as soon as Revere is activated off of the disabled list. Of course it will just be a matter of time before Matt will do something else to help the Nats win.

Sometimes a quote in a different context loses meaning, and here is an interesting quote from Dusty Baker, “When you cover my back, I cover yours big-time.” That is a strong statement by Dusty, and it was made about Chris Speier, but one could twist that Dusty quote and apply it to the loyalty of players on the roster like Matt Belisle and Chris Heisey who both played for Dusty prior to the Nationals. Both Belisle and Heisey got $1.25 million deals, and they were the 24th and 25th players to make the Opening Day roster beating out fan favorites Sean Burnett and Matt den Dekker.

Dusty seems loyal to a fault. You hope his loyalty in some coaches and players pay dividends because Nats fans have a loyalty to a player like Matt den Dekker who helps the team win!

An ode to Upper Dekker from Laura Peebles:

Matt denDekker, catch a plane,
The Nationals need you STAT.
Bring your clothes and bring your cleats,
But most of all, your bat.

Upper Dekker caught the plane
Direct to ATL
His clothes arrived, his cleats arrived,
The bat? He swung it well.

Dusty called it in advance:
“He’ll hit to win the game.”
Matt, welcome back to Washington,
Let’s have more of the same! 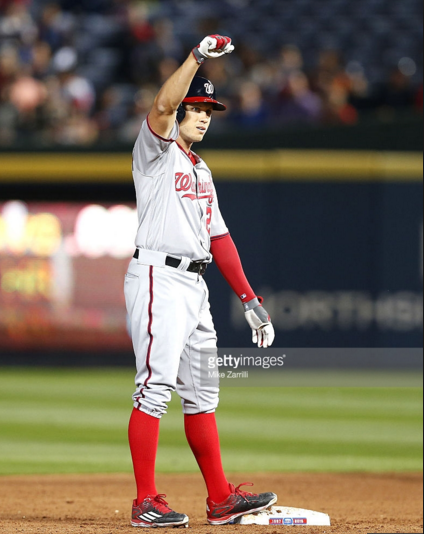 This entry was posted in denDekker. Bookmark the permalink.
← Previous Article | Next Article →