The making of Bryce Harper started at birth with an incredible genetic make-up that was nurtured by his family at an early age. His family unit has shaped him as a child and into a man. Bryce’s father, Ron Harper, was a union card-holder in the Reinforcing Ironworkers Local 416, and Bryce’s mom Sheri has always been the glue that holds the Harper family together.  At 3 years old, Bryce was playing T-Ball on his older brothers team, and followed his brother to play with him on teams that challenged Bryce at every level until Bryce began playing better than boys years older than him. This continued until Bryce was the best amateur in the USA winning the Golden Spikes award. 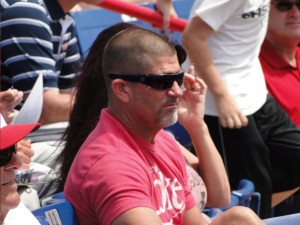 Bryce had his father Ron Harper who was role model as well as his personal instructor and BP pitcher, and 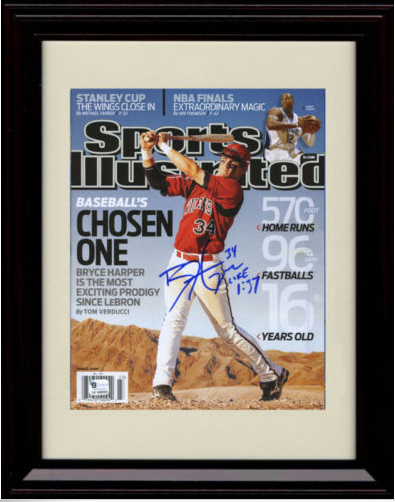 together they made Bryce into a player who became an amateur baseball player known in the travel baseball circuit nationwide even before Bryce graced the cover of Sports Illustrated as a 16 year old.

When Bryce Harper accepted his NL MVP trophy in January during that blizzard that shut down NYC, Bryce gave his acceptance speech and thanked the Lerners, his teammates and then broke down with some tears as he thanked his family and in particular his father:

“My pops sacrificed everything to help me fulfill my dream. Countless hours of BP. Groundballs. … The thing I loved the most, on the hot summer days, that we’d always get Slurpees and have fun. No matter what. That or our strawberry shakes. He always made it fun no matter what. If he could get up at three a.m. in the blazing heat or freezing cold, then I would give anything in this world to thank him every single day and tell him how much I love him. I appreciate you Pops.”

The humbleness and understanding of sacrifice is something few his age would know. While others were playing video games as a 10 year old, Bryce was hitting bottle caps and little red beans as part of his drills he did with his dad and big brother. His days were long—school, practice, games and more practice.

Sam Thomas was Bryce Harper’s baseball coach at the public high school near Bryce’s neighborhood. Bryce attended Las Vegas High, and Bryce could have attended just about any private school in the country with all expenses paid by one of those creative academic scholarships that top athletes land all the time, but Bryce decided that Coach Thomas and Las Vegas High had everything he wanted. When Bryce decided to go with his friends he grew up with to Las Vegas High, Sam Thomas said, “It was as if I hit the lottery to get Bryce.”

Tim Chambers was a long time family friend and confidant to the Harper family and was Bryce’s college baseball coach at the College of Southern Nevada “He’s got all the media eyes on him, the pressure. All eyes have been on him all the time, and he’s been able to perform.” When Bryce encounters problems with others, much of that starts with what Chambers says, “All that stuff stems from jealousy.” We’ve heard that before!

Tanner Chauncey is one of Bryce’s friends since elementary school and a baseball player at BYU, “I can’t remember a time when Bryce didn’t have big calluses on his hands from hitting. He was working when the rest of us weren’t.”

Not everyone in the media thought that the route Bryce Harper was traversing from dropping out of High School to enter college early with the public knowledge was to enter the draft at age 17 was a good idea. In this Bleacher Report article which was written when Bryce was 16 years old, the writer clearly didn’t agree with his parent decision, “Harper’s parents are doing an enormous disservice to their child” as well this from the writer, “It’s all or nothing for him. It’s either Bryce Harper: MLB Superstar, or Bryce Harper: plumber extraordinaire.”

Bryce was drafted at the age of 17 at #1 overall in 2010 by the Washington Nationals, and as a ‘professional’ the marketing arm at Boras could get going. Former University of Maryland softball standout Mandy Allendorfer leads the marketing team at the Boras Corporation and Allendorfer and her colleagues immediately got Bryce some Madison Avenue exposure in 2010.

Bryce is growing a brand, and it all started with products that Bryce personally used. Under Armour, Gatorade, New Era Caps, Warrior Eye Black, and Topps Baseball Cards are some of his current endorsements, and Bryce will also promote brands he personally likes in his social media which he has done with his custom duds made for him by Stitches of Las Vegas as well as other brands he likes such as Chandler Bats, Monster headphones and CMO Worldwide leather goods . 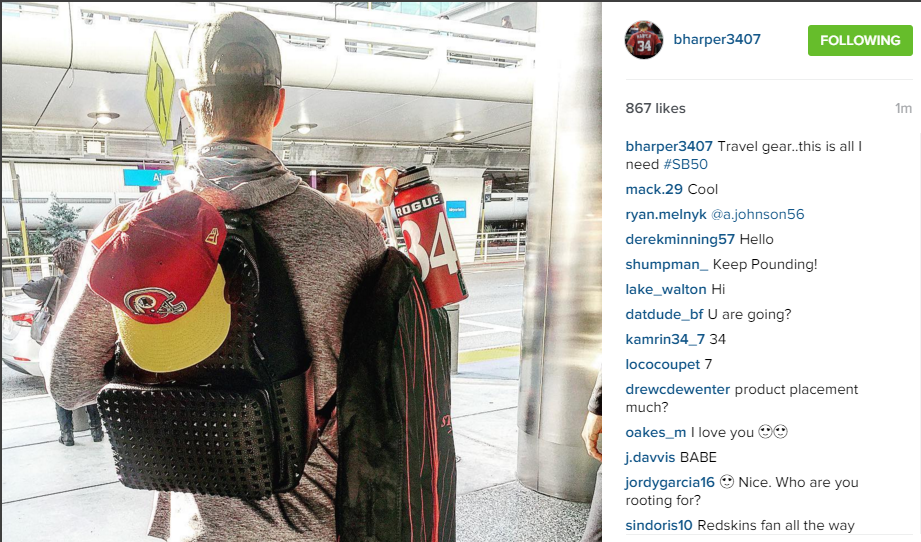 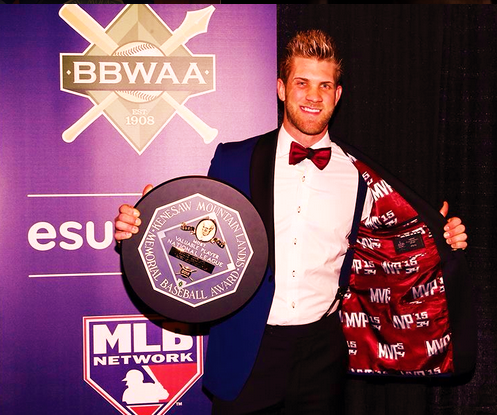 In 2012 when Bryce was just starting his MLB career and could get more national exposure to build his brand, Bob Dorfman, Executive Vice President and executive creative director at Baker Street Advertising told ESPN, “Because baseball is such a regional sport, it’s difficult to become a national household name without postseason exposure and World Series rings. It doesn’t happen overnight — even when you’re the game’s biggest phenom. The league certainly needs a new star to fill Derek Jeter’s shoes as the game’s No. 1 pitchman, and Harper has all the tools to do it: youth, talent, looks, charisma and interesting hair. If the winning keeps up, Harper continues to excel and the Nationals make the playoffs, expect Madison Avenue to come running.”

Bryce has long been interested in fashion and social media, and the 2 definitely go hand-

in-hand if you follow Bryce’s fashion posts which include his hair which has a very unique style. Under Armour created the Bryce Harper BH34 logo which is a part of Bryce’s cleats, batting gloves and undershirts.

New Era also plans to create some wearable Bryce Harper products and we will have to wait and see what that product line looks like at it’s release. Valerie Camillo at the Hot Stove event hinted at a fashion show with Sports Illustrated models. Bryce has already been a swimsuit model himself in a spread in the ESPN Body issue so why not a fashion show with SI swimsuit models?

For all those who stay focused on the back and forth of $400 million and 1/2 billion dollar contracts and where Bryce Harper is playing in 2019, you can think back to a prediction made by Harolyn Cardozo who is the Nationals’ assistant to Mike Rizzo and she said this almost exactly 5 years ago, “My prediction is that Washington ties its balloon to his, and they float away together.”  It might sound like some of Harolyn’s favorite poetry but if you’ve ever met her, you will tie your balloon to her right hand.

All this leads us to the creativity in the Nats marketing department to create some unique gifts and giveaways and you saw some of that last year with the nesting dolls that were given away, but there was a 100 sets made in extra large sizes that were made to give away to lucky fans. The marketing department decided to merge social media into a Bryce Harper item and came up with the ‘social media’ bat. It was made in a set of 5 bats and each bat includes Bryce Harper social media quotes on the bat.

At the Hot Stove luncheon, one of the five Chandler bats were given away to a lucky fan. Bryce has 1 bat, the Lerners have 1, and 1 lucky fan has a bat now, and we will reveal below who that special fan is.

We asked a Nats spokesperson this week whose idea was it to do this special bat? “It was a collaborative effort. We have a very talented and creative group here who are always working on ways to wow our fans and show our appreciation to our players.”

We asked the Nats if the last bat they have is earmarked for someone? “A decision has not yet been made.” That means there could still be a chance that the last remaining bat ends up in the hands of a Nats fan as it is rumored to be a bat they will auction off at  Dream Foundation event.  The second to last ‘social media’ bat was given away at the Nats Plus Hot Stove event, and they called out a ticket number, and Joe Shapiro was the lucky fan in attendance who won one of these special bats.

Quotes that Shapiro liked and shared with us, “He’s the best! NL MVP on and off the field!”—Steve L. 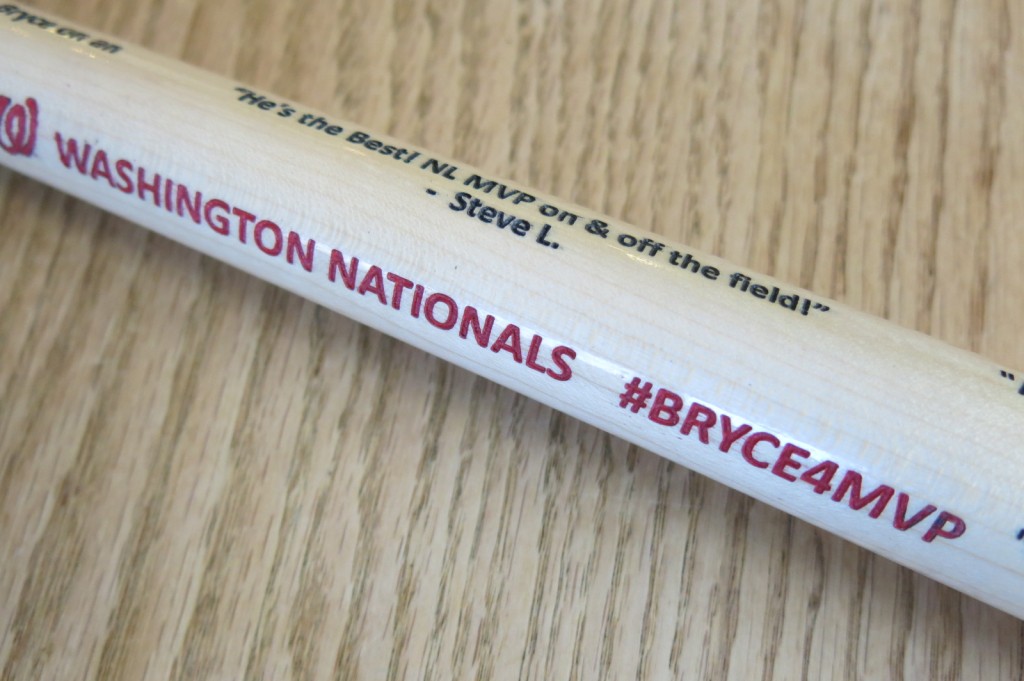 “#ThankYouBryce for every hit, every moment of hustle, every fan you inspire”—@NatsDugoutLibrarian 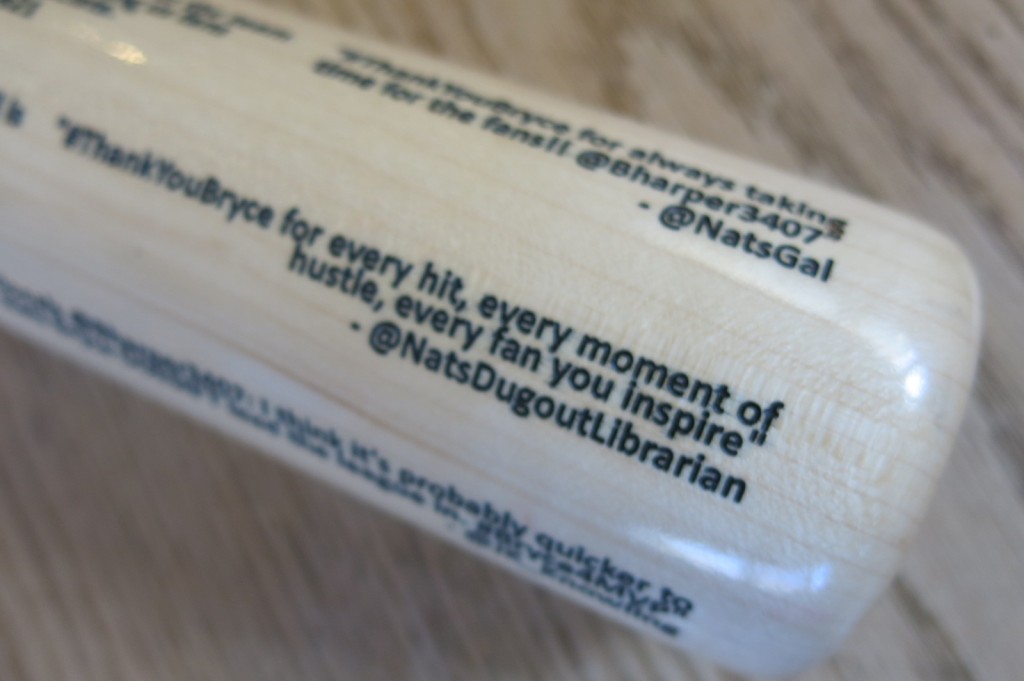 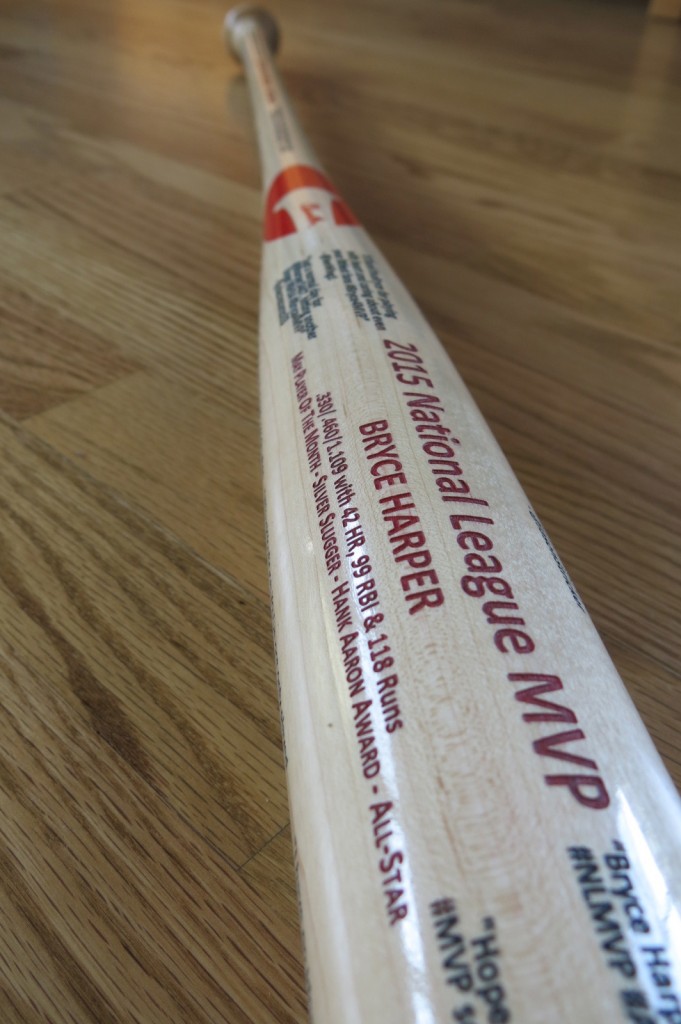 “#ThankYouBryce: You’ve not only played amazing baseball but you’re a class act. We’ll always be rooting for you.”—@NatsSquid 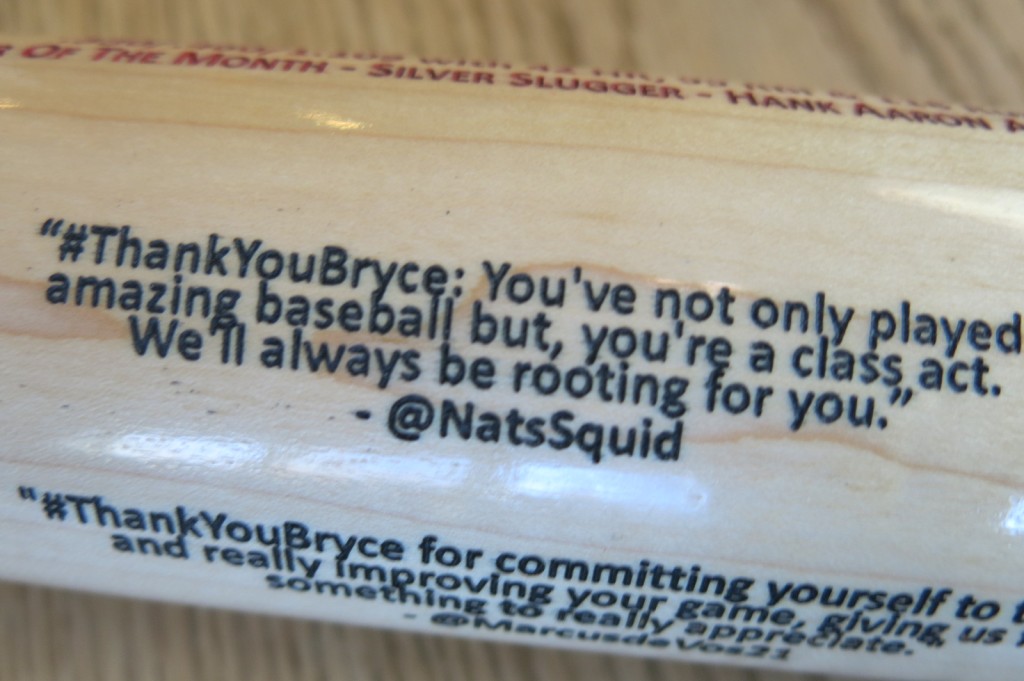 Shapiro has been a season ticket holder since the Nats humble beginnings in 2005, and he grew up in DC and was of course a Senators fan as a kid.

About 4 years earlier, Shapiro’s employer (NPR) needed a writer with baseball knowledge to do an interview with Bryce Harper in 2012 for NPR, and Shapiro was chosen to do the interview with Bryce. The final taped cut of the interview was just over 4 minutes, and Shapiro and Harper spoke for much longer than 4 minutes which included a discussion of players who Harper admired like George Brett, Pete Rose, Cal Ripken and Jackie Robinson. Bryce even knew about Frank Howard, and his monster home runs as a player for the Washington Senators, and Shapiro gave Bryce some baseball trivia that Ted Williams was once the Manager of the Washington Senators. You can hear the interview and read about it: http://www.npr.org/2012/07/04/156184888/baseballs-teen-phenom-steals-home-and-hearts

#ThankYouBryce for always taking time for the fans!! @Bharper3407 pic.twitter.com/yY3XX4ixqt

Bryce also participates in charitable efforts and has a history of doing little things for children who are ill.  In 2013 Bryce started Harper’s Heroes and partnered with the Leukemia & Lymphoma Society.  Harper’s Heroes provides children battling cancer or have beat cancer the opportunity to attend a Nationals game with their family with all the trimmings at no cost to the families. They attend batting practice on the field, and they get to all meet with Bryce before the game in a private room. Click here….

Social Media can also bring awareness to a cause as shown by how many times this beautiful tweet was shared!

The reason you play the game! #HarpersHeroes thanks for a great year! pic.twitter.com/8CNOwvx82f

UPDATED: Lisa Iannarino is the Marketing & Communications Director for the Leukemia & Lymphoma Society of the National Capital Chapter and she has told us that LLS and Harper’s Heroes will continue working together for 2016! That is great news, and we hope to cover a future event to bring more awareness to LLS.