Posted on February 21, 2016 by ArVaFan aka Laura Peebles

It all starts under a full moon in Viera: Pap apologizes, everyone reports in TBSOTL, Dusty manages. Who knows where it will lead? Stay tuned…. 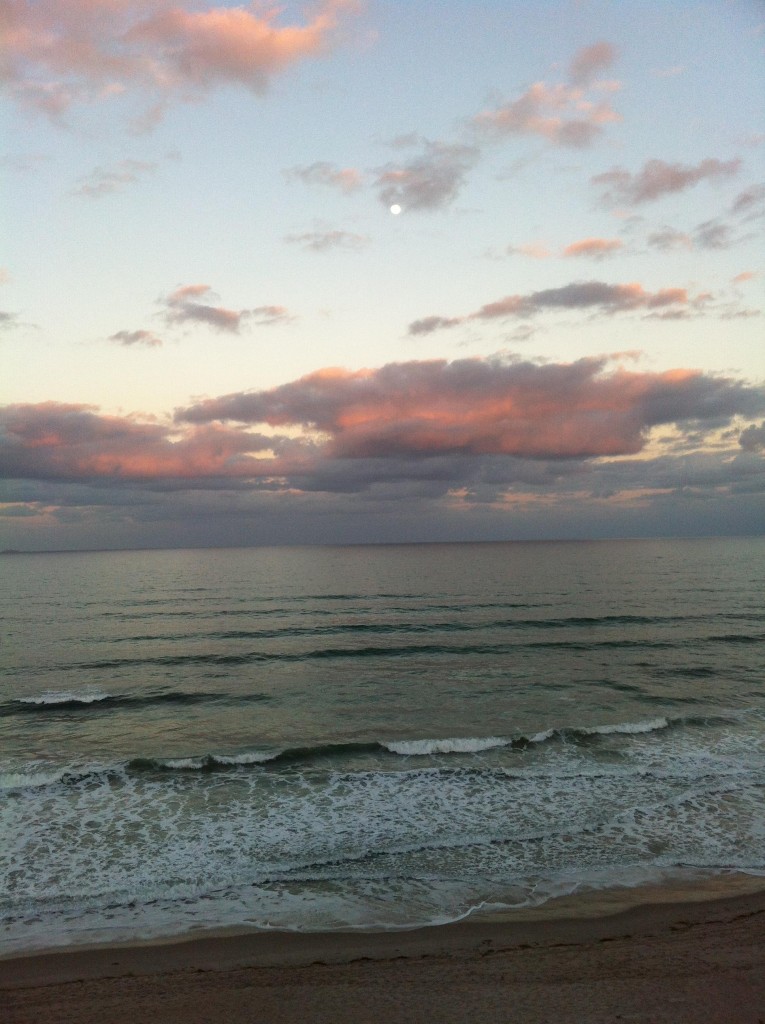 Grass as green as jealousy.

All is well in Viera.

Oh, you want details.  And photos. Ask and you shall receive!

Here’s your play-by-play for today in Viera.

Got to the fields a little earlier than necessary (around 9, players started arriving around 9:45).  Passed some typical Florida sights:  a guy “walking” his dog while riding his golf cart, ospreys and turkey vultures on the light standards.  Chatted with Susan, the gate greeter, compared notes on the auto-train, and picked up my roster page (really helps, given the number of new players:  roster listed by number as well as alphabetically).  Dodged a pick-up football game among the waiting fans, and chatted with a couple of the fans waiting for the players to arrive.  Maybe 30 fans at that point: 1/3 each kids, parents, and “qualified for the senior discount.”

Pitchers, coaches and catchers arrived by carts to the far side of one field, walked across the field, then between two ropes held up by the staff to make a path between that field and the first field where the whole group did calisthenics. No ball or hat signings at that point, but some “hellos” and “good mornings” were exchanged. Frankly, given the number of newbies in the pen, I was pleased that I could get 80% of the first names attached without looking at my cheat sheet.

Everyone was standing around waiting for the word to get started, and another cart pulled up by the gate on the far side of the field:  there’s Pap.  Not sure why he got a special ride—was he running late, or they just didn’t want him walking through the fan gauntlet yet?  But he was certainly greeted with enthusiasm by his teammates. 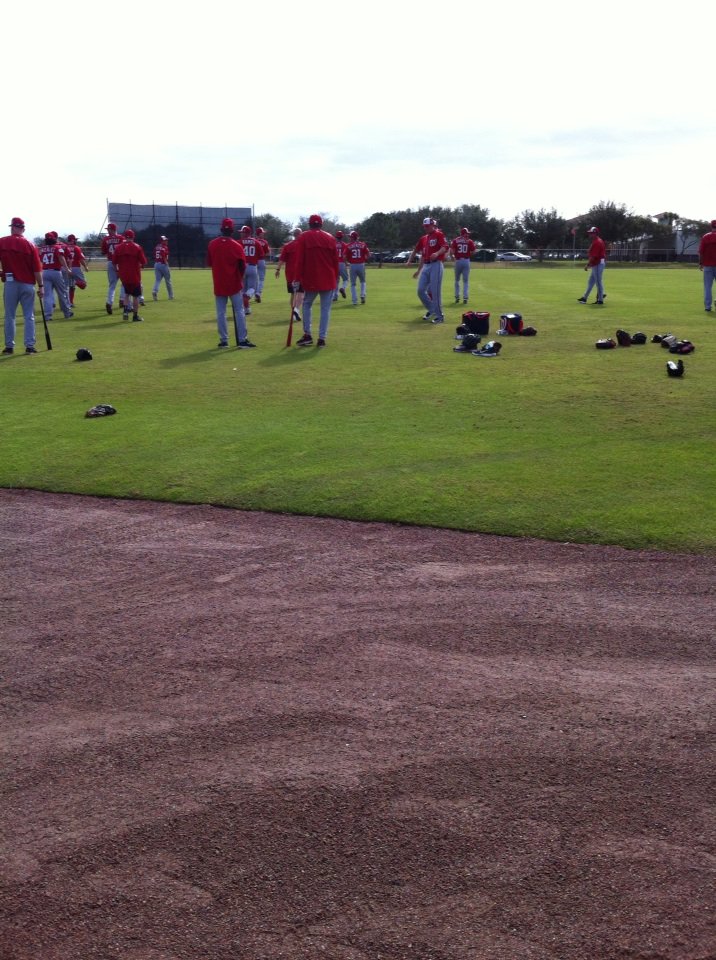 Dusty appeared, and the exercising started.  Running, long toss, stretching, various forms of arm-waving.  Barrett participated in most of those drills.  Unlike Ohlendorf (who did his wind up even for long-toss) Bronson Arroyo doesn’t do a leg kick for long-toss. If they do the same drills tomorrow, I’ll try to get closer to get a shot of Pap doing a stretch on the ground:  he does an amazing imitation of a pretzel.  Last time I was that flexible I think I was six. One of the exercises involved putting one hand on the ground and one hand up.  Gio, ever fastidious, wiped off his hand every time he touched the grass.  Stras, Roark, and Grace were rocking the red socks today.  Someone called out to Dusty (who was sporting a bat and batting gloves), “Hey, taking batting practice today?  That’s the only reason we came!”  Dusty responded “no, it’s just a cane.” Dusty interacted A LOT with the fans as well as the players.

After the exercises, the group split up.  Most of the fans headed for the mound area rather than PFP.  Unlike a few years ago, there’s only five catchers on the roster, so the mound area isn’t packed like it was when there were 10 pitchers were lined up by height:  Gio to Chris Young.

On the walk over to the mound area I had a chance to ask Dusty if he’d gotten any fishing in yet.  He said “a little, but I want to do more:  everywhere I turns there’s water!”

Ramos looked fine (personal opinion, but judge for yourself).  He certainly looked limber enough in the drills. I had a chance to tell him that I enjoyed his workout tweets. 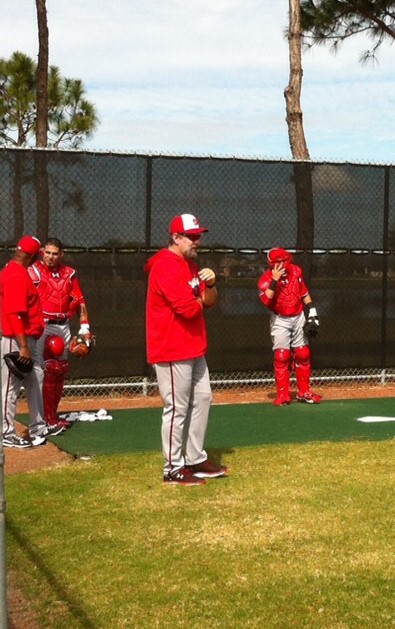 Gott looked good (not that anyone looked bad—though remember that I’m a fan, not a scout!) Spouse was parked by the fence, and she (former PE major) thought he looked good. Did overhear Perez getting coached on his timing re holding baserunners.  At one point I counted 29 guys on the inside of the fence watching four pitchers.  That compares to 23 fans and one dog on the outside of the fence.  Wished Lobaton “Buena suerte” and he responded “thank you.”  Somehow that seems backwards!

Rizzo came over to the gate to get water:

Me:  “Any day that involves baseball is a nice day!”

Kid:  “We need Jordan Zimmermann back!”

Here is Mike Maddux giving Treinen advice on the grip on his changeup asking him to take the wrist hitch out of the motion and go to a tighter grip. It worked and Maddux liked what he saw. 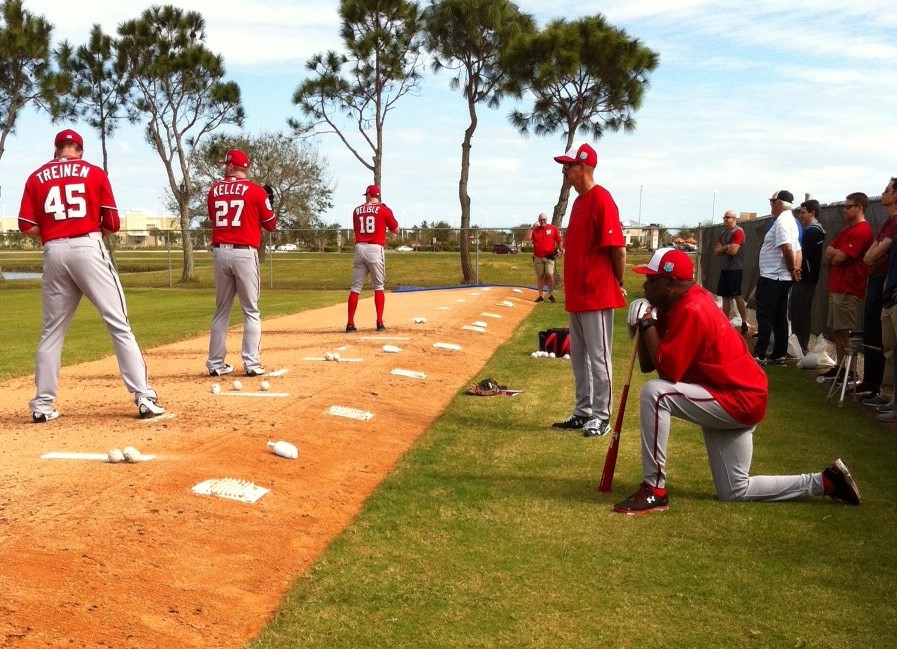 Then the pitcher group that included Giolito arrived.  I’m sure someone was paying attention to the other three pitchers . . . but not much!  (Hill, Cole, Brady).  Brady was getting some extra looks from Dusty Baker.  Michael Brady is a non-roster invitee, and should move up as a player to watch just in case. 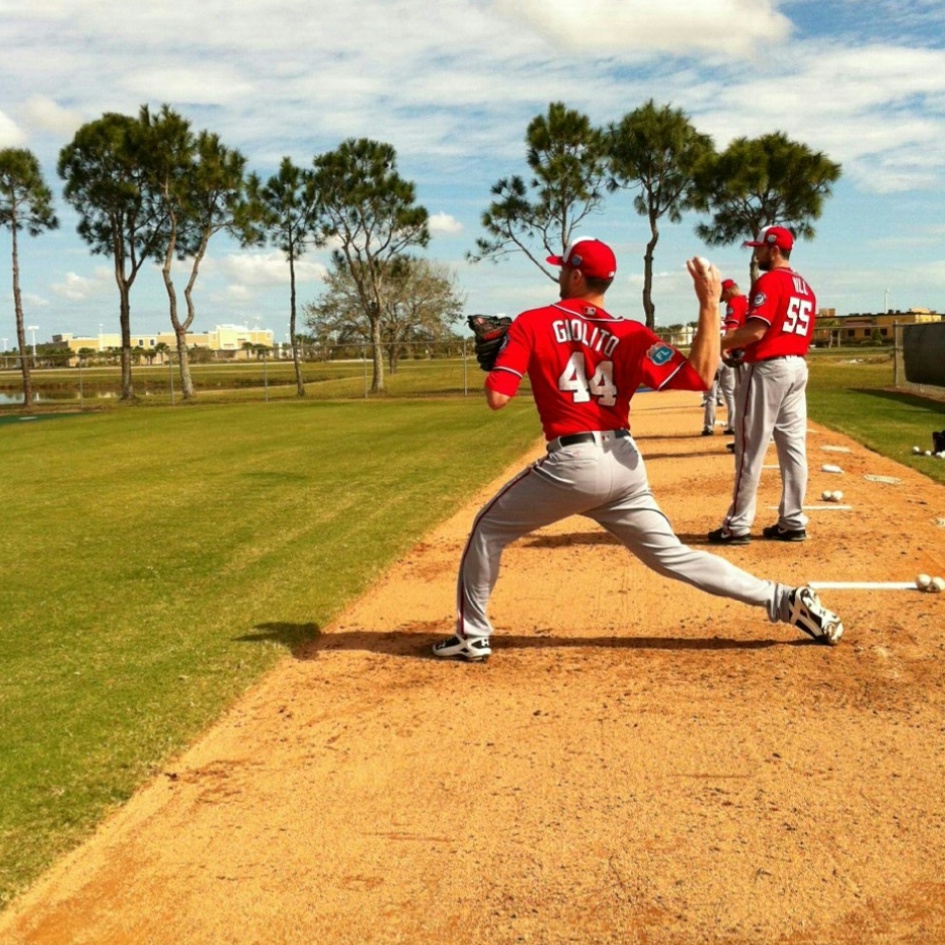 After the pitchers finished, the catchers jogged over to a couple of fields for fielding and batting practice.  They did bunting, regular hitting, pitchouts, blocking balls in the dirt, and bunt fielding drills.  The “pitches in the dirt” are generated by a pitching machine. From what I observed, all five catchers need work on blocking, although Kieboom was the best of the lot today.  Speier made an offer to the catchers:  if you can keep five balls in a row inside the dirt circle that he drew around the plate, he’d make them a sandwich.  He said that he was up to four sandwiches so far. As far as batting practice, no one hit one out that I saw, although I couldn’t watch both fields as once.

Dusty watched the batting practice from right up against the cage:  Rizzo from about 20 feet away in his golf cart.  Dusty helped pick up the balls after the practice.

And for those inquiring minds that want to know:  yes, there’s still an air horn to signal time to change between fields, but it’s more of a “honk” or “toot” than MW’s “blast” last year.

One of the most anticipated moments was the Lucas Giolito sighting and lucky to get Papelbon and Michael Brady as well as AJ Cole in the same frame. 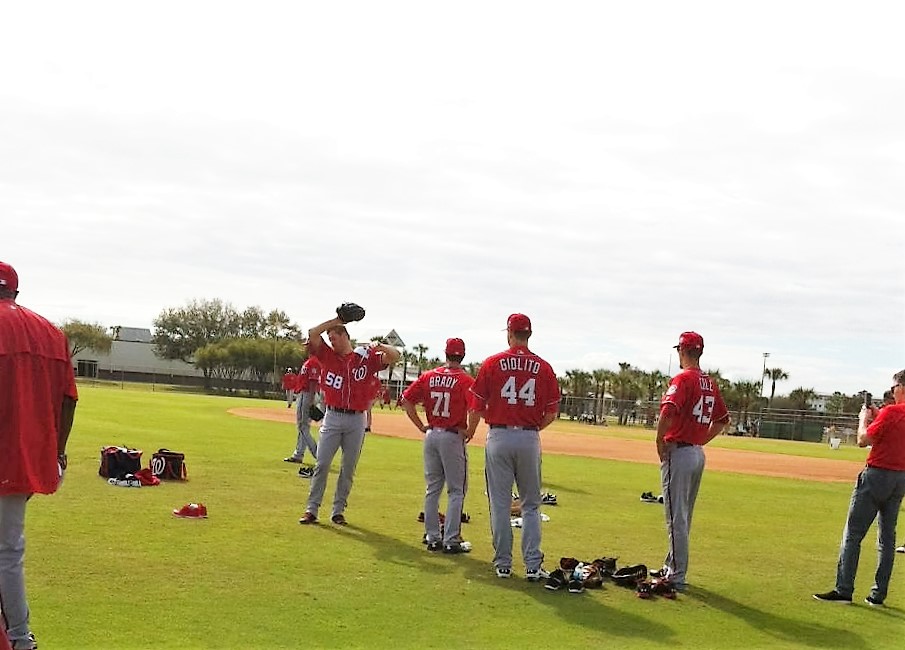 Here is Bronson Arroyo, Stephen Strasburg, Gio Gonzalez and Jonathan Papelbon. These seem to be the first public sightings of Pap’s in Viera. 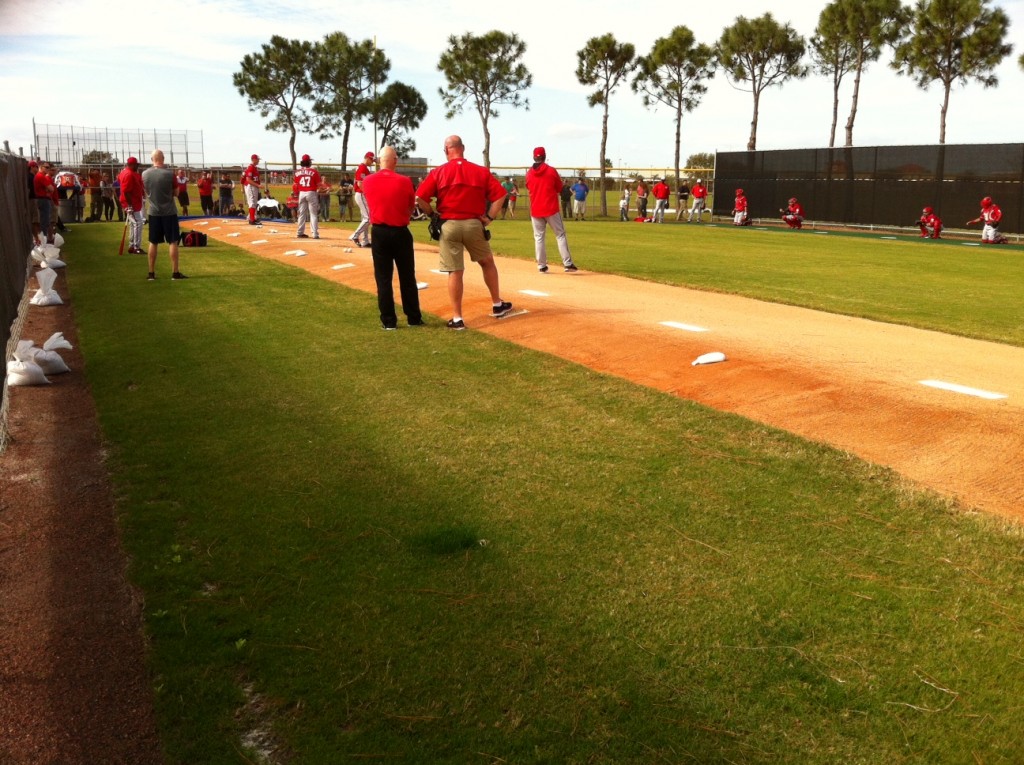 UPDATED: We were sent this to spread the word for a photo shoot with the Nats and a player from the Nats who they aren’t saying who it is now. A good chance that it is Bryce Harper and it shoots in 5 days: 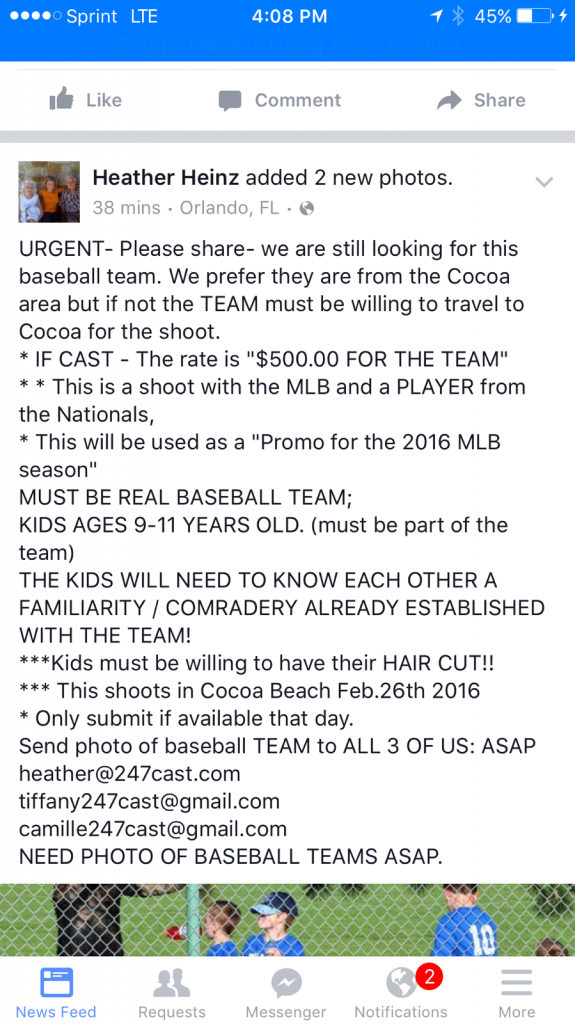 This entry was posted in Giolito, SpringTraining. Bookmark the permalink.
← Previous Article | Next Article →