Treasure hunting isn’t always limited to searching for a Pirates booty as we drove on dry land and into the mountains on our way into Pittsburgh Pirates territory deep into Pennsylvania to meet a Bryce Harper collector who was interested in selling one of the rarest of Bryce Harper items in existence.  A true treasure in the world of sports memorabilia. What we would later learn about the Bryce Harper item became a true Thanksgiving story. 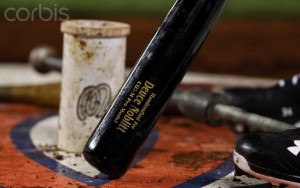 Washington, DC, USA — Nationals’ Bryce Harper stands on deck with a bat with the name Deuce Noblitt on Aug. 17, 2012. Harper hit a two-run homer with the bat. The Nationals won 6-4. — Image by © Alex Brandon/ /AP/Corbis

The rare item is the Deuce Noblitt home run bat which was used during Bryce’s 2012 rookie year. The bat was made by the Marucci Bat Company of Louisiana who made almost all of Bryce’s rookie bats, and their rep said they made only 4 of these Deuce Noblitt bats. From research done, only one of those bats has the MLB Hologram on it certifying the game use.

Part of the lore and special collectibility of this bat is the story of Deuce Noblitt. The young boy with the cool name was in fifth-grade and a Bryce Harper fan from Ocean Springs Mississippi who had been diagnosed with cavernoma which is a neurological brain condition which required surgery on Deuce’s brainstem. In August 2012, Deuce would undergo his 2nd surgery on his brain. Harper had chosen to honor the young fan by having the brave boy’s name etched on his bat where normally the player’s name would be on the bat’s barrel. The story got the attention of photographers, and of course collectors who wanted that bat.

The background and name for the bat takes on a life of its own as collectors would discuss the Deuce Noblitt.  Probably the most infamous nickname for a bat was Black Betsy which was the name of Shoeless Joe Jackson‘s bat that is the most expensive bat sold in baseball history at $577,610 in 2001 to a buyer in Pottstown, Pennsylvania http://usatoday30.usatoday.com/sports/baseball/stories/2001-08-07-shoelessjoe.htm

This could be the only Deuce Noblitt ever to be used in a game and also make it from Bryce Harper to the public. The path and the trip it took to go from Bryce to the first public owner is not known for sure, but it eventually made it to an auction in July 2013, and they certified Bryce hit his 11th and 12th HRs of his career with this bat in his rookie season.

Fast forward 3 years from 2012 to the present, and some great news as Deuce Noblitt is back on the court playing basketball! 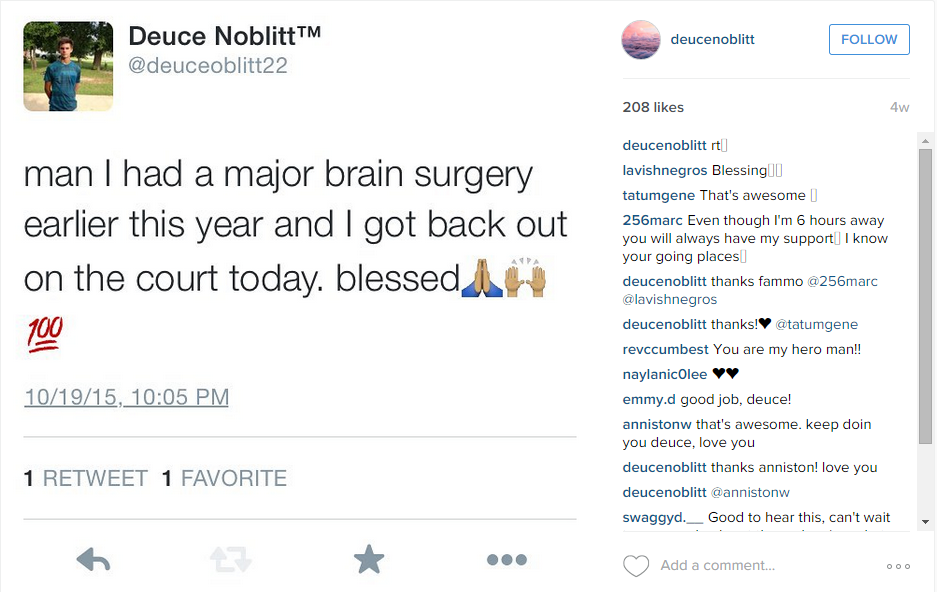 We got to speak to Deuce Noblitt on this Thanksgiving holiday to which Deuce posted a message to the more than 1,700 people who follow his life on Instagram and over 100 more on Twitter.  His latest message on Thanksgiving: “just thankin God for all I have and where he’s taken me and what I’ve been through”.

Deuce is now 14 years old and in the 8th grade. He’s 6’2″ tall and plays basketball.  With limited use of his left-hand, he unfortunately is no longer playing baseball, but he loves baseball and still a huge fan of Bryce Harper.  Deuce said, “I knew Bryce was going to win the MVP and happy that he did. He’s still my favorite player”.  Deuce went on to say that he never got to personally meet Bryce and hopes one day that he still can.

Deuce is a well-mannered young man with a Mississippi accent thicker than Tyler Moore‘s. He answered many of our interview questions with a very courteous “Yes sir” and “Thank you sir”.  So how did Deuce get the cool nickname? His real name is Montgomery Noblitt II, named after his father, and Deuce became the perfect nickname.

After his most recent brain surgery,  Deuce told us he hoped that will be his last surgery, and we pray that this young man continues his healthy recovery and the best of health in the future.

We left Pennsylvania with the Deuce Noblitt bat in-hand.  On our trip back from Pennsylvania, we headed straight towards Hagerstown, Maryland to share this new purchase with one of the biggest collectors of Bryce Harper and Hagerstown Suns memorabilia.  Hagerstown of course is the town where Bryce got his pro start with the Hagerstown Suns which is the Minor League Low-A affiliate of the Washington Nationals.  Perhaps the largest Bryce Harper collection is partially housed on display in the entry to Beaver Creek Antiques in Hagerstown on Route 40.  The display case has many Bryce items as well as Lucas Giolito items and is only part of the owner’s overall collection which includes the 1st professional jersey Bryce ever wore. 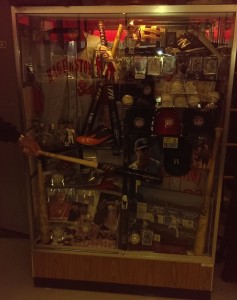 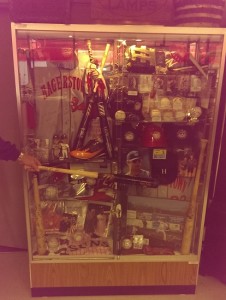 There is so much more meaning in one-of-a-kind items if you do the research, and not all items have the history of the Deuce Noblitt bat, but many items will connect with you personally.  People have been collecting Bryce Harper trinkets, mementos, collectibles, and memorabilia since Bryce Harper was a youngster in Las Vegas.  We’ve heard stories of 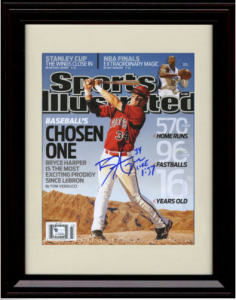 Home Run baseballs of Bryce’s from when he was 14 years old being collected.  When you appear on the cover of Sports Illustrated as a 16 year old, it’s like a large target for profiteers who see an opportunity to take advantage of a young boy except this young boy has always been ahead of his chronological age on the smarts of life and baseball, on and off the field.  On the popular collectors site eBay.com there are currently over 9,000 items for sale under the title ‘Bryce Harper’ compared to 2,800 for his teammate Jayson Werth.

On eBay, there’s plenty of Bryce Harper one-of-a-kind items.. The more unique, the more collectible as Bryce Harper seems to be making history early and often.  As the Rookie of the Year in 2012, and the 2015 MVP with a Silver Slugger, Bryce has his eyes set on the World Series ring.

If Jason Heyward signs in the AL, a Gold Glove becomes a real possibility and who knows, maybe a Triple Crown can be a reality too!  The skies the limit for Bryce!

When we began writing this story, it was supposed to be about a treasure hunt and travels and instead the journey became a true thanksgiving story of what we sometimes take for granted in our health, and Montgomery “Deuce” Noblitt is thankful, very thankful, for his health.

There is now new symbolism for this 32 ounces of maple lumber in its journey from the craftsmen at Marucci with some extra magic with the Deuce Noblitt name etched into the barrel and into Bryce’s hands where he hit his 11th career HR for the then 11 year old Deuce Noblitt and then his 12th HR leaving 2, or should we say DEUCE home runs, connected by this maple lumber which on August 20th, 2012 split into deuce pieces and put back together into one beautiful piece like Deuce’s life.

This entry was posted in Giolito, Harper. Bookmark the permalink.
← Previous Article | Next Article →