Last December the Nats acquired four new relievers in rapid succession. I quickly read about each of them but remembered almost nothing as it was in the middle of the “You like that” craze. So with the Nats spring training quickly approaching I did some research to learn about the new guys.

Trevor Gott
Acquired via a trade that sent Escobar and cash to the Angels for Gott and minor leaguer Michael Brady. He is a 23-year-old righty from Kentucky. The Nats have him locked up long term, he is not arbitration eligible until 2019 and a free agent until 2022. Of the four new bullpen guys Gott is the only one under 30 and has the highest upside, there is speculation that he could be a closer one day, although 8th inning specialist would be a more likely ceiling.

Gott got off to a hot start in his MLB debut last season, being called up on June 14th he retired the first side he faced with three outs in seven pitches. His first nine games he pitched at least an inning and did not give up a run; he didn’t get a loss until his 27th game. He did fade a bit late in the season, probably as the hitters figured him out. Ending the season with a 3.49 ERA, having pitched 47.2 innings in 48 games, the definition of a one inning specialist, usually the 7th last year.

Baseball Reference projects him to have virtually identical, if not quite as good stats in 2016. I suspect the expected drop off is due to Angel Stadium being a pitcher’s park. He had a higher strike out rate in the minors than he did in MLB last season, hopefully that picks back up this year. Gott got guys to hit a high number of ground balls for outs and singles, depending primarily on his high 90s fast ball, along with a “slurve” and a change-up.

Gott was a popular player among Angels fans, most were not happy with the trade, although a few felt that it was the right time to make a move while he was at peak value. He is listed at 6’ tall in the media guide, which is often commented on by the press as being very generous, he is described as short for a pitcher and very slight. His first trip to DC was for Winterfest where he missed the first day due to food poisoning.

One claim to fame is the “Trevor Gott Rule” for the Cal Ripken   World Series (h/t Morgan Gott who is the sister of Trevor Gott), they had to move the mound back after he struck out nine guys in three innings.

The Angels missed the playoffs by one game last year and Gott blew a save in the final home game. He headed back to his locker to find a squirrel costume left for each of the rookies, which he wore even though he was obviously frustrated at the time. A good sign for the Nats that he was trusted in a game with the season on the line despite his lack of experience.

From the OC Register:

In 46 innings, he has allowed 41 hits and 16 walks while logging 26 strikeouts. He attacks hitters, relying heavily on his fastball with high-90s velocity, heavy sinking action and lively movement through the zone. He also has a sharp low-80s curve and, on rare occasion, a changeup.

The velocity is extraordinary from a pitcher of his youth and size, which is listed generously as 6-foot and 190 pounds. Not exactly Gottzilla.

Gott’s fastball seems to come in somewhat quicker than it already is due to a load of deception. Gott hides the ball incredibly well, to the point where batters don’t see the ball until it’s leaving his hand, which happens to be the same arm slot his off-speed offerings come from, making him even more deceptive.

Oliver Perez
Oliver Perez is a 34-year-old lefty who was signed as a free agent for two years for $7 million, he played for the Diamondbacks and Astros last year and has played for the Padres, Pirates, Mets, and Mariners. He is originally from Mexico, he’s 6’3” with a low 90s fast ball and a slider.

Last year Perez pitched 41 innings in 70 games with a 4.17 ERA, he had 51 strike outs and 15 walks; in the playoffs he pitched .1 innings in 2 games with a 27.0 ERA, ouch!!! Baseball Reference projects a drop in ERA to 3.88 in 51 innings in 2016. It’s a little concerning to see how few complete innings he threw last year. He pitched much better in Arizona, allowing them to make the trade.

There is much talk about Perez being a lefty only specialist, lefties hit .185 against him last year while righties pounded him for a .310 batting average. But in 2014 it was the opposite, lefties hit .281 against him while he held righties to .184.

There are very few comments on-line about his time in Arizona, just another anonymous middle reliever. In Houston there were a number of complaints that he was overly concerned with runners, from the MLB board: “There’s nothing worse than a pitcher with a goofy showboat windup who gets beaten like a piñata at the plate.”

Perez was a starter until 2010, his career best outing was a complete game shut out on 9/6/2006. This performance helped Boras get him a huge contract from the Mets, which did not end well. While dealing with a knee injury the Mets asked him to move to the pen, he resisted and ended up being released with a year and $12 million still on his contract, ouch again.

After getting dropped by NY Perez pitched for the Nats AA and AAA teams in 2011, making no major league appearances. Since 2012 though he has had a 3.31 ERA coming out of the pen, he’s thrown 61 or more innings each of the past three years. 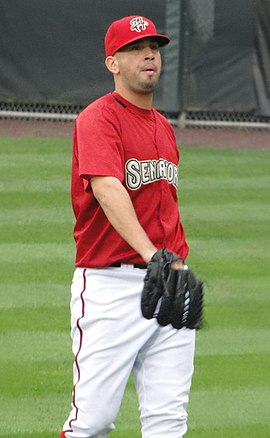 Perez in the Nats farm system

Shawn Kelley
Shawn Kelley was signed as a free agent from the Padres for three years for $15 million total, the highest price paid for any of the new bullpen guys. He is 34 years old, from Kentucky, and is 6’2”, he has also played for the Mariners and Yankees. He has a low to mid 90’s fastball, along with a slider and a change-up.

Last year Kelley had an ERA of 2.45 in 53 appearances for 51 innings, with 63 strike outs and only 15 walks. He has been right about 50 innings per year for the fast four years. 2014 was his career year, with a slight drop off in strike outs but better numbers overall. Baseball Reference projects him to have a sharp increase in ERA to 3.70 in 56 innings.

Kelley has made frequent trips to the DL. He’s had two Tommy John surgeries, the first in 2003 and the second in 2010. The last one was a rare “partial” repair of his original surgery.

Most of the Yankees fans were sorry to see him go after the 2014 season even though his numbers were not spectacular. That being said, Yankees fan comments can be pretty rough (while fun to read). There is a Shawn Kelley Sucks web site with the following instruction: “Please do not post inappropriate comments, this is a friendly forum for fans.” Shawn Kelley Sucks

Yusmeiro Petit
Kelley is getting the most money, Gott has the most upside, and Petit has by far the most interesting history. Chances are he’ll have a spectacular moment or two this year but won’t be on the team long enough for anyone here to learn how to spell Yusmeiro.

Petit is a 31-year-old righty out of Venezuela who signed a two year deal for $6 million total, with the Nats having an option to drop him after 2016. He has pitched for the Marlins, Diamondbacks, and most recently the hated Giants. His fast ball is only in the high 80s, his best pitch is his curve which he consistently places in the low corners, keeping his walk numbers low. He has a quick delivery which is always a plus for fans watching the clock as the hands edge close to ten on a weeknight.

2014 was Petit’s breakout year, it was his first full season in MLB; prior to that point he had been up and down, including all of 2010 in the minors, then 2011 and most of 2012 in Mexico. He has been a long reliever and spot starter his entire career, one of his plus points is that to keep his place as the 25th man on the roster he is happy to start a game with little notice and come in to pitch in relief after sitting for ten days. 2015 was the first year when nearly all of his appearances were out the pen, he only had one start.

Despite struggling to stay in MLB Petit’s career highlights would be pretty high on most pitcher’s resumes.

One concern is that most of those accomplishments were done in AT&T Park, possibly the most pitcher friendly ballpark in MLB. Another is that as a long reliever he does get to bat on occasion, he has a .045 career batting average, zero walks, and zero extra base hits in 121 plate appearances.

Petit was non-tendered by the Giants after a less consistent 2015, he was cut in order to clear roster space for younger relievers rather than based on the about $3 million he would have been owed via arbitration. He chose the Nats because of their recent history of making the playoffs and because he knows Ramos, Lobaton, Perez, and Kelley.

Jonathan Papelbon
Jonathan Papelbon did pitch for the Nats last year, but he was signed late in the season so many fans might not be familiar with him yet. He is a 35-year-old righty who grew up in Louisiana. He is due $11 million for 2016 based on agreeing to a $2 million pay cut to come to the Nats. Papelbon has also pitched for the Red Sox and the Phillies, he is the career saves leader for both teams.

Papelbon had a 95 MPH fastball in 2011 which has been declining, reducing his effectiveness as he relies on power. He also has a splitter and a slider. Baseball Reference predicts that his numbers for 2016 will match his numbers to end the year for the Nats, a 3.00 ERA in 63 innings and only 20 saves.

Papelbon actually played in the DC area once before, during the summer after his Freshman year in college he played in Silver Spring for the Takoma Park Thundercats.

Early in his career Papelbon was a long reliever, he even started three games in Boston in 2005 prior to his official rookie season. Beginning in 2006 he moved to the closer role, setting a rookie record for ten saves in April. He went on to place second in Rookie of the Year voting in 2006 and followed that up with the Delivery Man of the Year award in 2007. Papelbon hit the 200 saves mark in a record 359 appearances, an MLB record. He is a regular in the All Star Game, with seven trips, including each of the last two years.

Papelbon really made a name for himself up in Boston during the playoffs. In his first six appearances he held his opponents scoreless. He had three saves in three World Series appearances in 2007, including the final out. After that success he had some notable setbacks. A blown save in the elimination game of the 2009 ALDS was his last playoff appearance and a blown save in the last game of 2011 led to the Red Sox being eliminated in the Wild Card race.

Papelbon, also known as Slap Happy Pappy or just Slappy, is very deliberate on the mound and has been fined several times by MLB for taking too much time between pitches. He is a no nonsense old pro, expressing his displeasure with the Philly fans as warranted. Slappy is a clubhouse guy who does not tolerate young players who speak with the media about internal team issues and he has shown a strong dislike for loafing on the base paths. 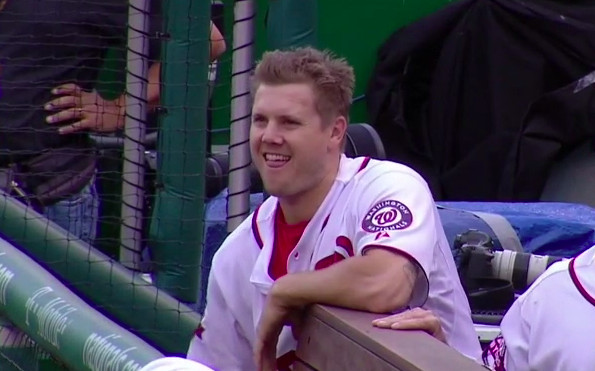