There are a few certainties we know with Lucas Giolito, and we feel comfortable saying that the 6’6″ righty will be on an innings limit in 2016 and that he will dominate the Minors.  Giolito enters the 2016 season as Baseball America’s #2 prospect overall in the Minors and the #1 pitching prospect .

What we don’t know is how many innings Giolito will be limited to due to his status as a Tommy John alumni and given his age, he will get the kid glove treatment again in 2016. Giolito’s innings workload increased almost exactly 20% from 2014 to 2015; however, after the 2015 season ended, Giolito headed to Florida for Fall Instructs where he continued to pitch.  Rizzo and his braintrust have a plan for the 21 year old Giolito which they won’t make public.  If we assume a 20% innings increase above Giolito’s 2015 Single-A and Double-A innings, Giolito would be capped at approximately 141 innings for 2016.

Lucas Giolito can also find himself as an integral piece of the Washington Nationals 2016 team which would make a delayed start to Giolito’s season, like the Nats did with his 2015 season, a potentially wise move that could make sense. Giolito didn’t make his 1st of the 2015 season until May 8th of 2015 when Giolito pitched at Single-A Potomac .  That allowed Giolito to pitch until the end of the season when he was promoted to the Double-A Harrisburg Senators.

We have graphed Giolito’s 2016 innings and K/9 and while the innings can go higher we projected a much lower K/9 than FanGraphs at 6.66. 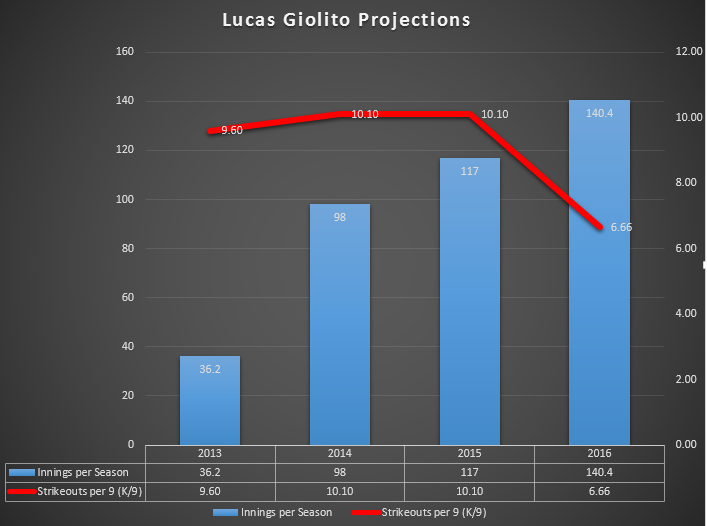 FanGraphs is projecting Giolito to pitch 74 innings for the Nats in 2016 which would be approximately 12 starts.

Mike Rizzo has extended a Spring Training invite to Giolito for his first big league camp. Dusty Baker and pitching coach Mike Maddux will have an opportunity to see what Giolito has. Most scouting services already know that Giolito has big time stuff with a high 90’s fastball that can touch 100 mph and he plays his changeup off of that. Giolito’s curveball has good tilt in which the scouts say has “two-plane break” with that 12-to-6 tumble and depth that makes it un-hittable when his mechanics are sound and gets his spin rate and drop out front.  It’s the changeup that is the work-in-progress.

Nationals assistant general manager Doug Harris recently did his rounds with the media, and this is what Harris had to say about Lucas Giolito to MLB.com:

“We got him into Double-A last year. He was able to see more mature hitters. He has a better understanding of what he needs to do to pitch successfully on a higher level. I think it was a real good experience for him. We took him to the instructional league last year. When he arrived, [pitching coach] Paul Menhart, Lucas and I sat down and talked. He broke himself down to a tee. He understood what his strengths are. He understood what his weaknesses are. He knew what he needed to do to get better.

It made it a whole lot easier on us and he went out and did it in the instructional league. He always had dominant stuff, but he repeated his delivery, got better at holding runners. He did a good job at fielding his position, all the little things you have to do to move up in the systems.”

Harris had also said that Giolito was throwing free and easy in Fall Instructs and felt the best he had since his Tommy John surgery.

Jonathan Mayo has this on Giolito,  “The sky is the limit for Giolito, who has the stuff, physicality and command to develop into an ace. The Nats would like to see him make additional strides with his changeup and become more comfortable pitching with runners on base, but there’s little doubt that he’s nearly ready to make an impact at the highest level.”

Bryce Harper just said this and it applies to Lucas Giolito, “They said the sky was the limit..I turned around and said I’ve heard of a thing called outer space! #LimitLess”

This entry was posted in Dusty, Giolito, MikeRizzo. Bookmark the permalink.
← Previous Article | Next Article →