Curiously, the “marketing” portion of Saturday’s Hot Stove meeting with Nats fans was 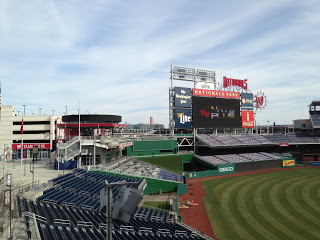 more fun than the “baseball” segment—in my opinion. We were told we couldn’t video because “proprietary information” was coming out. And maybe it did, if you count the design of bobbleheads and the alignment of vendors on the Gallery Level as proprietary. But go ahead and talk about everything on social media, we were encouraged. Anyway, Valerie stayed on the platform when Mike Rizzo, garbed in a signature checked shirt, sat down and gave us not much that we hadn’t read in the newspaper or on Twitter. He was patient and charming, but no secrets were revealed. Two topics were mildly interesting, Jonathan Papelbon and the Nats’ medical staff.

As I noted in Part I, the first mention of Papelbon (namely the possibility of a Pap bobblehead) was met with resounding boos. When Rizzo discussed the Nats’ off-season, Papelbon’s name got more negative reaction, but not quite as long and loud. Rizzo addressed the issue directly when a fan proposed that “we are not Philly or New York, we don’t boo our own players.” The GM responded that fans pay for their tickets and are entitled to express themselves as they see fit. He then stated it was not a problem in the clubhouse or between the closer and the NL MVP. The crowd seemed mildly dissatisfied with this, expressing itself with mild boos and chatter. Finally, later, in a discussion of roles in the Nats’ bullpen, Papelbon’s status was mentioned to a more-or-less sullen silence.

Which makes me wonder, is this pretty much how fans will behave at games? With a loud show of disapproval upon Papelbon’s first entrance and then settling into a murmur subsequently? Assuming, of course, that he performs well.

With regard to the new approach to injury prevention and rehab, Rizzo said the team lost 1300 player-days to injury in the 2015 season, and the losses were to key players. I don’t know how he calculated, but there are sites that track this, here’s one: https://www.mangameslost.com/category/mlb/mlb-2015-season. It only costs $5 a year to join, and I’m perfectly willing to invest, but not to publish their data here.

Anyway, Rizzo said it was too much to overcome, and had to be fixed. Although he didn’t go into a lot of detail, he pointed to unique job descriptions on the medical-training staff modeled on the European Soccer League. He also credited Jayson Werth for pushing hard on this.

After the meeting there was a little entertainment from the dancing Presidents. I assumed that the video restriction was over, so enjoy.

This entry was posted in MedicalStaff, MikeRizzo, Papelbon. Bookmark the permalink.
← Previous Article | Next Article →