The Opening Day roster and the Best 25 Go North! #Nats

Every year there seems to be a few surprises emerge from Spring Training in Viera Florida.

In 2015, it was Minor League journeyman Clint Robinson who earned a spot on the Opening Day roster and remained on the Nats roster the entire season. In Spring Training of 2015 Clint Robinson was a 30 year old who hadn’t reached rookie status in his career as he had amassed only 13 career games and 14 plate appearances to go with his 3,836 career Minor League plate appearances over his 8 years  in the Minors.  Robinson was certainly a long-shot to make the Nats roster as Robinson was an under the radar signing who inked a Minor League deal with a Spring Training invite on December 12, 2014.

Robinson fits in that category of “you never know”.  Numerous injuries opened up spots for Clint Robinson and other players as several projected “locks” for the roster were injured like Werth and Span and McLouth along with Rendon who got injured during Spring Training.

The #Nats have announced their 2015 Opening Day 25-man roster: pic.twitter.com/5KEq7xrcBF

Matt Williams had 3 openings for outfielders and 1 for an infielder. 4 players who had virtually no chance of making this team if you projected the roster on October 1 of 2014 and they were Clint Robinson, Dan Uggla, Reed Johnson, and Matt den Dekker. Actually none of those players were even Nats players on October 1, 2014.

The most intriguing names on the non-roster invitees for this Spring Training are Bronson Arroyo and Chris Heisey as they are 2 former players of Dusty Baker’s. The 40 man roster has some other long-shots like former top prospect like Brian Goodwin and pitchers AJ Cole and Taylor Jordan.  Lucas Giolito will be part of big league camp and he is not on the 40 man roster. Trea Turner is the other player to watch.

Giolito, Turner and Ross chronologically are the 3 youngest players with a chance to make an impact on the 2016 Nats team. 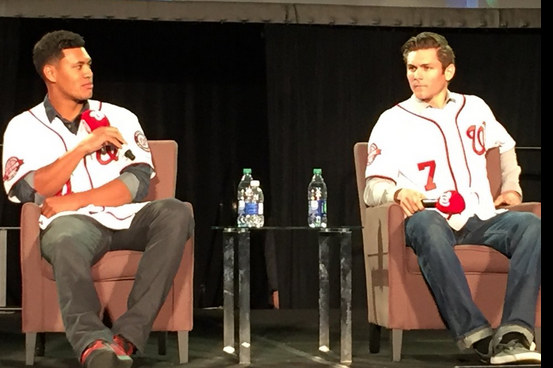 When we say the best 25 go North, this probably means the best 25 available go North. Lessons learned and we will watch if a Nick Lee, Abel de los Santos, or Scott Sizemore have any chance of making this roster.

If you want to see the Washington Nationals non-roster invitees to Spring Training you can come to this link on the Nationals.com website although right now it’s empty:

Who do you see as a surprise to make this 2016 Nationals opening day roster?