A NatsLady view of the Hot Stove event: Part I

On a lazy Saturday morning, while I was sort of listening to Mike Wallace on “Nats Talk” talk about how pitchers prepare for Spring Training, I got a message from Steve M. with an invite from Bob (Section 222) to Mike Rizzo’s Hot Stove meeting. Luckily my hot water and printer were both functioning. A quick shower, print the ticket and, off to the Park.

I literally forgot my usual route, that’s how unfocused I’ve been in the off-season. But I got there in plenty of time. The Park was neat, clean, and COLD. The cherry trees don’t even have buds. 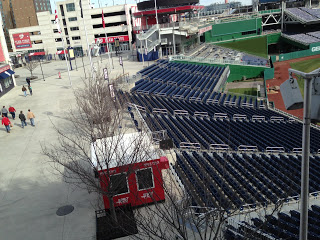 Hundreds of people made the same trek to Nats Park for this event on February 6th. Here they are in the Norfolk Southern Club in front of me, (and behind me—not pictured). 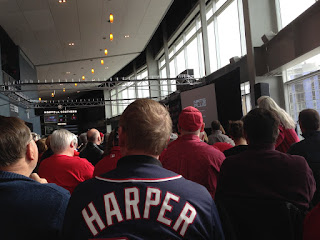 Valerie Camillo, Chief Revenue & Marketing Officer for the Nats, spoke first. She triple-warned us against making videos, but said photos were OK. I took notes. Some items of interest.

My Part II will be focused on Mike Rizzo.  This piece was really about Valerie Camillo’s portion.  Laura aka ArVaFan and Don and Bob aka Section222 also posted up their notes, and this is just a different take on the same event.  Hope you enjoy.