The January 14th Lineup. What is it? #Nats

Earlier today, Daniel Murphy did an interview with Thom Loverro and Kevin Sheehan on ESPN 980 .

Loverro asked Murphy, “from the outside looking in, what do you think went wrong with the Washington Nationals last year?”

Murphy continued his answer talking about why the Nats struggled in 2015, and Murphy was correct in saying he thought the health of the team was a major factor as he talked about Rendon, Ryan Zimmerman, Werth and Span who all suffered through injuries.

Murphy missed a key stat by 1500% as he guesstimated that the Nats fielded the Matt Williams #1 lineup for “just over 30 games together”, and in fact it was only 2 games the entire season. We have previously referred to the 2015 #1 lineup as the  January 14th lineup.  Why did we call it the January 14th lineup you might ask?  That was the day the Nats traded for Yunel Escobar (1/14/2015) and the starting line-up was complete: Span CF, Rendon 3B, Harper RF, Ryan Zimmerman 1B, Werth LF, Desmond SS, Escobar 2B, Ramos C was what everyone hoped was going to be the Nationals 2015 Opening Day line-up, and it was not for 160 games in 2015.

That January 14th line-up first debuted on August 25 which was Game #124, and by the end of the game on August 26th we would never see them together in the same line-up again.  2 total games with this #1 line-up: 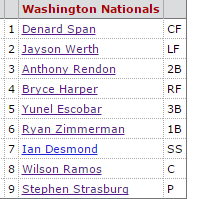 What could this  January 8th line-up look like against right-handed pitching? Murphy was asked in his ESPN980 interview where he thinks he will bat in the order and he gave the politically correct answer of “wherever Dusty Baker sticks me!”

And when Trea Turner joins the Nats full-time does Dusty go to the sjm308 line-up with the pitcher batting 8th?  L-R-L-R-L-R-R-P-R

It is hard to imagine the great line-ups we can come up with when Trea Turner is called up.

“With the history of the Nationals and the history of injuries, we’ve got to keep our frontline guys healthy and we’ve just got to stay healthy. That’s our #1 priority [going forward].”