The media has been giving the #Nats the Rodney Dangerfield treatment.

For those of you who are old enough to remember the stand-up comedy of Rodney Dangerfield, you know his famous line, “That’s the story of my life, I get no respect!”  and that seems like the history of the Expos and the Nationals. The Nats are easy targets as they don’t stand up for themselves generally, and the media knows that. It’s like the bullies who pick on kids that won’t fight back.

There was a long period of time in the Nats history where they deserved the criticism, and that was most of the years through 2011.  In 2012, the Nats were big winners in the regular season, and seemed destined for greatness.  The Nats had to endure distractions with the Strasburg shutdown, and that did add enough controversy in the media.

In the 2012 playoffs, the Nats were the talk of the Major Leagues until the Nats blew Game 5 of the playoffs in the NLDS. It was the Nats opponent in the NLDS, the St. Louis Cardinals, who were trash talking about “smelling blood in the waters” after the deciding game, and you see how quickly you go from the penthouse to the outhouse. The off-season was long and Rizzo demoted Storen and brought in Rafael Soriano for the 2013 season, and Davey Johnson made it a  ‘World Series or Bust’ season and BUST is what the Nats did.

The Nats went back to the playoffs in 2014 with Matt Williams as their new manager and once again the Nats couldn’t get past the NLDS which included a monumental meltdown closing out Game 2.

The Nats made a huge splash in the off-season leading into the 2015 season as they inked a $210 million deal adding Cy Young winner Max Scherzer to anchor their rotation, and Bryce Harper exclaimed “Where’s my ring?!?” which just did not sit right with the baseball media.  Bryce did his job and had one of the greatest seasons in MLB history on his way to unanimously winning the MVP, and unfortunately he was one of the few bright spots. As far as “Where’s My Ring”, the only ring found at the end of the season was the ring around the toilet as the Nats melted away after the All Star break and flushed themselves down that toilet.

Washington Post writer Barry Svrluga pointed to a dysfunction in the Nats clubhouse and Papelbon put the exclamation point on dysfunction as the season ended with negativity swirling.

When you get tagged with the dysfunction label, it’s hard to lose it, and during the Nats managerial search the media was bashing the Nats on their handling of the Bud Black process.  Was that the Nats fault or Bud Black’s fault? Let us blame the media for that one.

The Nats went into the Hot Stove season making offers to Darren O’Day, Ben Zobrist and later on to Jayson Heyward.

James Wagner made this comment in December regarding why Zobrist didn’t come to the Nats writing, “ Zobrist didn’t feel as comfortable in the Nationals clubhouse.”

That comment was never corroborated by any other member of the media that we know of, however,  the damage was done with that statement and it was re-quoted over and over again and if you say it enough, it kind of gets ingrained in enough minds that it gets stuck there.  When we contacted Zobrist’s agent at Octagon to try to get a confirmation of why Zobrist didn’t come to DC, we got “no comment”. Maybe Zobrist actually felt that way, and Wagner’s comment was accurate, but maybe it wasn’t and was just playing to this growing narrative that the Nats clubhouse was toxic.  Wagner’s source for the Zobrist quote was “according to another person familiar with the situation”.

When Yoenis Cespedes chose the Mets over the Nationals, Ken Rosenthal had this to say, “But the other thing you hear rumbling about in the industry is that players don’t want to go to Washington. They perceive that clubhouse to be a less than happy and harmonious place and they feel that it’s just not a great situation right now.”

Is any of this true about these rumblings in the industry? Can Mike Rizzo address the situation other than his normal responses about the anonymous negativity?

As Rizzo said earlier, “If I knew who that [unnamed source] was, I would respond to it. When it’s some blind accusation from an unnamed source, I don’t react to those.”

This past week, we learned through an affidavit filed with the courts that the Nats appear to be tapped out on cashflow and that quite possibly is the real reason why the Nats are attaching deferrals to almost every deal this winter, and if you recall, last year also. Scherzer took a $15 million a year deferral and Papelbon took a deferral and so did Daniel Murphy.  The Nats offered deferral deals to Jason Heyward and Yoenis Cespedes, and we never got confirmation on what the Nats offered Ben Zobrist.  Darren O’Day wanted a 4 year deal where the Nats were offering 3 years and Brandon Phillips needed to waive a no-trade clause to come to the Nats but wanted to restructure his contract to add extra year(s) and Rizzo turned him down.

Money is the great motivator too many times, and we can say with near certainty that Heyward, Cespedes, O’Day and Phillips didn’t come to the Nationals because of money and/or length of contract and not because of a toxic clubhouse.

We honestly can’t say why Zobrist chose the Cubs, and it could be as simple as his relationship with Joe Maddon, but he also didn’t choose the San Francisco Giants either and according to this article the Giants offered more than the Cubs. Could it be the geography of Nashville to Chicago was the clincher or was it something else? http://www.sfgate.com/athletics/article/Ex-A-s-player-Ben-Zobrist-offered-more-by-6687278.php

According to Peter Gammons, the present value of the 1st year of the 5 year deal that Rizzo offered Cespedes was worth $17 million and that is not a misprint. The Mets offered Cespedes $27.5 million in the 1st year which is over $10 million more. This was not an apples to apples offer, and there is no reason for certain media members to carelessly spread rumors that Cespedes didn’t take the Nats offer because of this alleged toxic clubhouse.

It almost sounds ridiculous to repeat the negative rumors as the 2016 Nats are far from being the same team as the 2015 team unless you want to connect the common denominator of Papelbon; however, that in and of itself should not be enough to keep banging the drum with this tired label on the clubhouse as the Nats have revamped over 25% of their roster with at least 7 new players, and a new manager in Dusty Baker. Papelbon may indeed get a 2nd chance, and this is a risk on the 2016 Nats for not only Papelbon’s clubhouse presence, but also his performance on the field.

JSP was kind enough to forward us a screenshot from his ‘live’ chat with lead writer Jeff Todd of MLB Trade Rumors that hits the point on the narrative that “free agents don’t want to go to DC” : 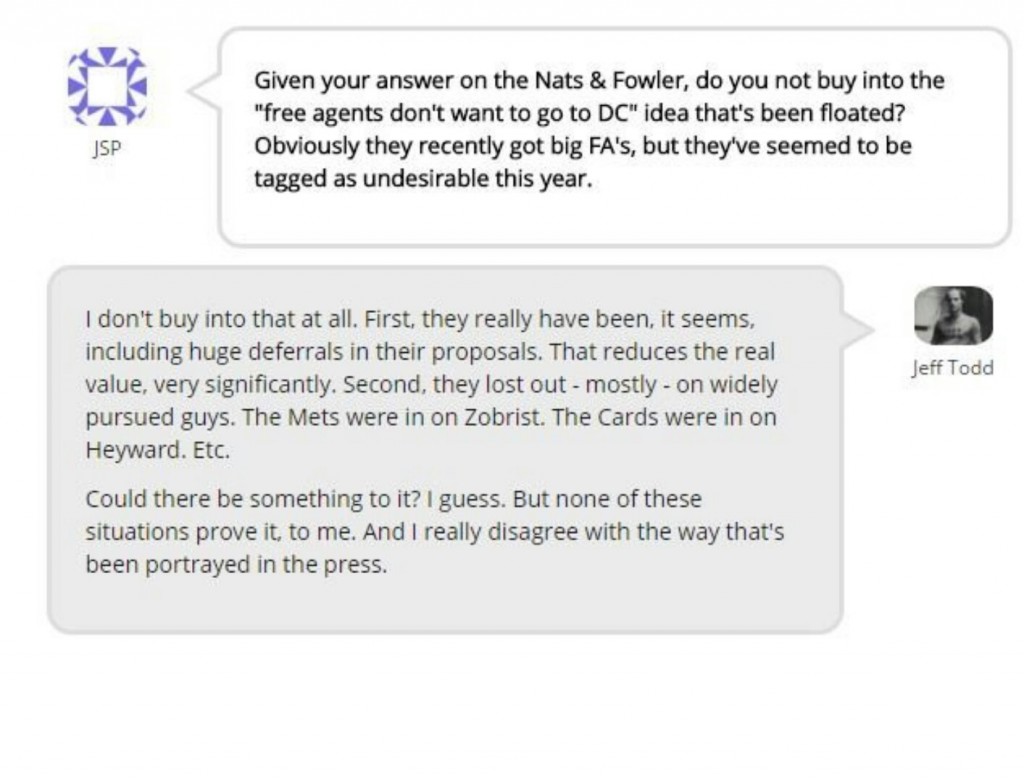 Well asked by JSP, and well answered by Jeff Todd.  People will usually believe what the credible media tells them and if they hear the same headlines enough it makes it hard to change their opinion. The Nats are not talking about it, and that seems to be the way they handle negativity.  Our message is don’t believe everything you hear.

This entry was posted in Lerners. Bookmark the permalink.
← Previous Article | Next Article →