Mike Rizzo and Dusty Baker are back to the grind!

The timing of the Nats WinterFest was actually perfect for Rizzo to set up a dinner  near the Marriott Marquis on Saturday night so Dusty Baker and his coaches could finally meet their players.  Mike Maddux and Chris Speier made the trip to DC as did Trevor Gott, Oliver Perez, and Shawn Kelley.  It appears that Yusmeiro Petit was among those who did not make the trip (correct us if that is wrong) since he wasn’t officially on the Nats roster prior to the weekend, and the other notable “no shows” per our site and per Matt’s Bats blog:

The feedback from everyone was they had a great time at WinterFest including Werth and Harper.  Now everyone shifts back to getting back to work time.

Harper provided this great quote which we all can agree with,

“I’ve got Rizzo’s back no matter what… I believe in this organization. Rizzo is still not done and hopefully we make a splash.”

Mike Rizzo’s biggest news was “[Nats] won’t pursue reliever Aroldis Chapman now” and Rizzo did his fair share of speaking over the weekend and answering questions. One of his first tidbits was that Lucas Giolito will be invited to his first Major League spring training in Viera in February. “We’re going to be a caretaker to his workload”.  Rizzo also spoke about his new acquisitions and making improvements.

Mike Rizzo sat down to answer your questions from #AskRizzo. Stay tuned for his responses. #NatsWinterfest pic.twitter.com/v1D0lYNvQr

There was much talk over the weekend that at least with the recent 4 acquisitions that if for some reason Papelbon and Storen were not traded, they could at least make it work on the field with who they have.  Rizzo just won’t just give these players away, and he will continue to take his time. It might not be what the fanbase wants to see, but clearly you can’t throw away a closer and expect you can replace him.

Rizzo continues to search for that lefty bat for the lineup and his righty bats in Jayson Werth and Ryan Zimmerman both said they were feeling good as did Anthony Rendon who said he could never get in a rhythm in 2015 as he bounced back from injuries.

Health certainly is a key factor in what this 2016 team will be and Rizzo thinks that while the team made a sizeable offer (reported at $200 million) to Jason Heyward that he will continue to look at ways at improving this team.

It’s back to work time for Rizzo and his staff, stay tuned.

This trade with the Rockies is gaining more steam and goes back to the Winter meetings and this is a screengrab from our December 9th post at the Winter Meetings: 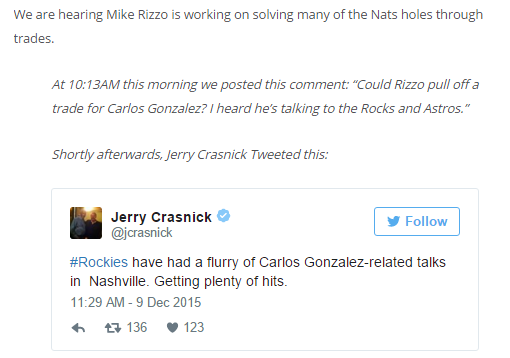 This entry was posted in CoachingStaff, DL, Dusty, MedicalStaff. Bookmark the permalink.
← Previous Article | Next Article →