You all might remember Moneyball: The Art of Winning an Unfair Game is a book written by Michael Lewis that was published in 2003 about Billy Beane the GM of the Oakland A’s.  The book was turned into a movie that was released in 2011 where Brad Pitt played Beane.

Why not a book about the MASN lawsuit? That’s exactly what a DC lawyer named Charles H. Martin, J.D., M.B.A. thought.  If you have followed the MASN history, you know it is a drama playing out in real-time.

Our first question to Charles Martin was to find out what motivated him to turn this MASN debacle into a book?

“First, I am a Nats fan. My grandfather was a Griffith Stadium vendor for thirty years. My father took me to see the Senators at DC/RFK Stadium.

Second, I negotiated and drafted corporate contracts for thirteen years. Then, I taught contract law full-time at two law schools for four years. I wrote academic articles on contracts that were popular. I wrote a big, long book on contracts (“Every1’s Guide to Electronic Contracts”) that was probably too academic to be popular. I plan to split it into several smaller and easier-to-digest books for the general public.

Third, the timing was right for me to write this book. I had finished my previous book in early 2014, and I was looking to apply the lessons I learned from that experience when I heard that the Orioles were trying to vacate the MLB arbitration results in a New York state court.

Fourth, I blog and I post on social media about contract law and its effects on small businesses, consumers and employees. Arbitration and non-compete agreements are two topics that recur regularly. Arbitration is at the heart of the MASN lawsuit. Non-compete agreements are indirectly involved through the history of the MLB antitrust exemption, and the now-defunct player reserve clause.” 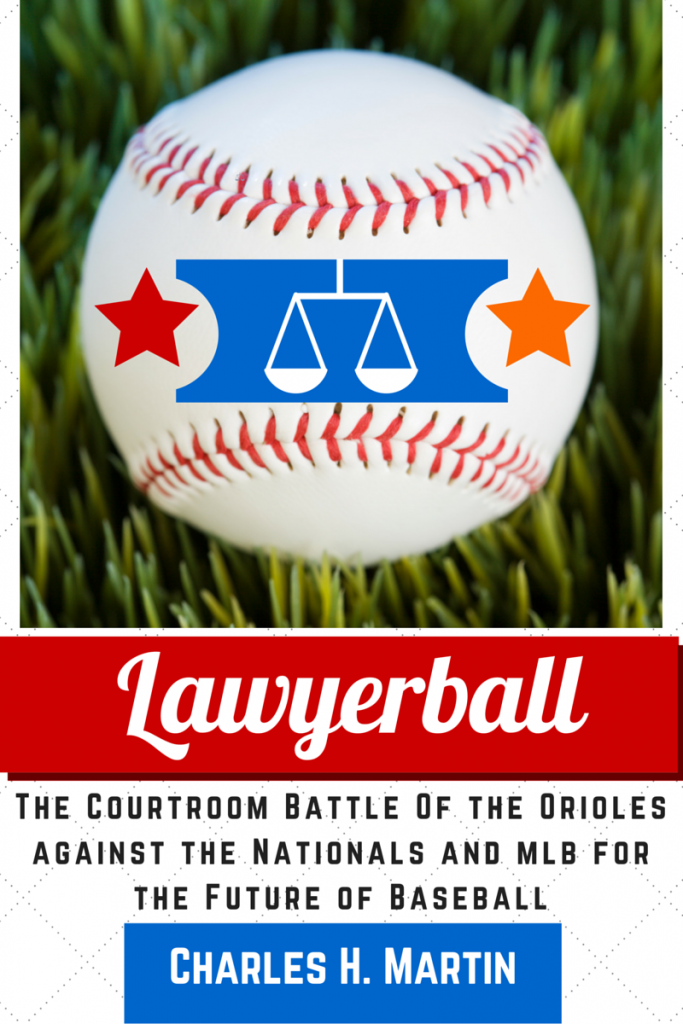 The RSDC awarded the Nats near $60 million a year for the years of 2012 to 2016 under the rules of the 5 year MASN reset which was set in the original MLB negotiated contract for the Nats and MASN.  Since the MLB deal with the Orioles was crafted in late 2004, the entire landscape of Regional Sports Networks (RSN) has exploded with prices doubling, tripling and more in some of the markets.  The DBacks just got that new $75 million a year deal in a much smaller market than DC and the Rangers, Phillies and Astros all got new deals that weren’t necessarily factored in back in the 2012 period when the RSDC considered the value of the Nats reset.  Our opinion is that the $60 that the RSDC arbitration board awarded the Nats seems under market.

We asked Charles Martin if he thought the  Nats could go back to the new RSDC arbitration board and be awarded even more money for the 2012-2016 period?

“I don’t see the Nats getting more for the 2012-2016 period. I think the RSDC did a very thorough job in analyzing comparable regional sports channel rights fee payments for that period. Of course, the 2016 season might be over before the Nats get their full payment for the 2012-2016 period. Then, it will be time to negotiate (or arbitrate or litigate) the rights fee payments for the 2017-2021 period. If the relevant facts change (television ratings, channel ability and willingness-to-pay), then the rights fee payments will change. The fees for other clubs have increased over time. There is no reason to think that the fees for the Nats telecast rights for the 2017-2021 period will not be higher.”

Sports Business Journal is reporting the Orioles are trying to now appeal Judge Marks decision that MLB can go back to the RSDC so long as the Nats change to a law firm with no independence issues.  This could delay the settlement even longer.

“MASN late Friday filed in the N.Y. Supreme Court a notice of limited appeal of the vacatur ruling it received last month in its ongoing media rights dispute with the Nationals and MLB. In that ruling vacating a MLB Revenue Sharing Definitions Committee decision for the Nationals, Judge Lawrence Marks wrote that he did not have legal authority to send the matter elsewhere for resolution. But with the situation now at an impasse, the Orioles-controlled MASN argued it needs to have the case ordered to a “new and neutral forum, independent from MLB,” calling the RSDC “irreparably conflicted.” 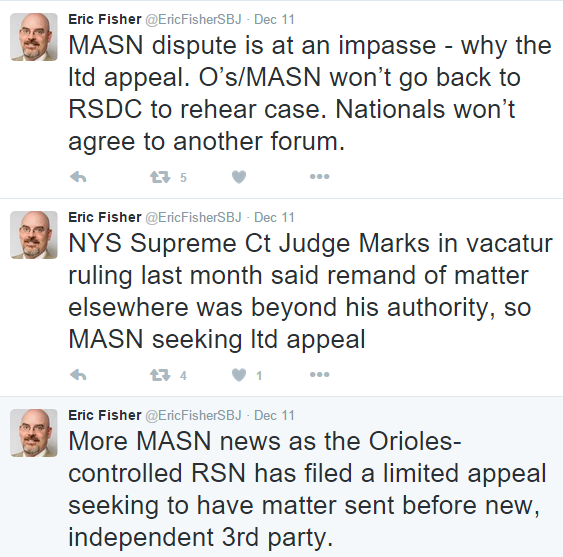 What will be the result of this appeal? I find it hard to believe that a state appeals court will throw out Judge Marks’s decision as either legally or factually wrong.

Legally, as Judge Marks noted in his November decision, arbitration awards are very rarely vacated by courts. He noted that his decision to vacate the 2012 MLB award for the Nats had no precedent in any similar cases he could find. Judge Marks was just very, very put off – first, by the Proskauer Rose law firm representing, or doing some legal work for, everyone in the arbitration process (including the Nats), except for the Orioles, and second, by MLB not responding to the Orioles’ objections to this multiple adviser role of this law firm. He basically said, “go back and do this arbitration again, but make sure the Nats have different lawyers this time who are not also doing any legal work for MLB or any of its other clubs or owners”.

Factually, appeals judges usually defer to the factual findings of trial judges. The trial judges see and hear all the arguments and all the evidence presented by the parties, as well as reading their written briefs. Appeals judges only read and hear the appeal brief arguments. Fact-findings are overturned on appeal only if they are clearly wrong. Judge Marks’s fact findings were a matter of his interpretation of ambiguous facts. They were not clearly wrong.

Nevertheless, as Brown’s article indicates, this appeal will add more months to this legal process as it winds its way through the appeals court. As Brown writes “In some ways, every day they aren’t required to pay the Nationals is a win for the Orioles.” Unfortunately, this is how the legal process works in the U.S. You can litigate and appeal until you reach a dead end.

What would happen after an Orioles’ appeal is denied? I think the new MLB/RSDC panel (or even a non-MLB panel) would award the same rights fees to the Nats. Not because they are “irreparably conflicted” and prejudiced against the Orioles. (At this point the arbitration panel members won’t even be the same club representatives.) The panel will award the same fees, because Judge Marks said there was nothing wrong with the methodology of the first award in 2012. So why should the next panel change their methodology?”

We also asked Charles Martin for his personal opinions of Angelos and the way he has handled this lawsuit?

Since this lawsuit might not be settled for months or years, we also wanted to know how Charles Martin was going to write the book now and if he planned on doing a 2nd installment of the book.

“Because my book will be published through Amazon and Apple, it will be easy to make any important changes to it to keep it updated for new developments. When enough new developments make the previous edition outdated, I will issue a new edition. Meanwhile, readers can check my social media (and occasional blog) posts for the latest news about this case.”

You have to start envisioning a movie made from this book like a John Grisham type adaptation of the legal side with the office politics of the football movie Draft Day.  There is the money aspect creating a shortfall for the Nats by not getting this MASN deal settled. Of course Moneyball did well in the box office so why not Lawyerball on the big screen!

Charles Martin had these thoughts, “Right now I am just dreaming of finishing this book before “pitchers and catchers report”, and making it the best darn read I can for everyone who loves the game of baseball, and who wonders what the business of baseball is really about. You won’t believe the stuff that lawyers say when there is big money at stake!”

You will be able to purchase the book as a paperback initially from Amazon CreateSpace. Soon thereafter, Martin plans to have e-book versions available on Kindle and iBooks. Follow his updates at www.lawyerball.com or at my Amazon Author Central Page at http://www.amazon.com/-/e/B00E8NSUCU

The book tries to put this “courtroom battle” into the context of how some big business practices that are condoned by American law, judges and legislators would cause them to “throw the book at” you, me or anyone else for the same practices.

We’ve had the great opportunity of “JCC The Real John”, “Steady Eddie”, “JH JHewittll” and “TheophilusSpeaks” as 4 legal minds who have lent so much knowledge to this MASN mess. We thank Charles Martin for taking his time with us and can’t wait to read this book!