Posted on November 6, 2022 by SaoMagnifico 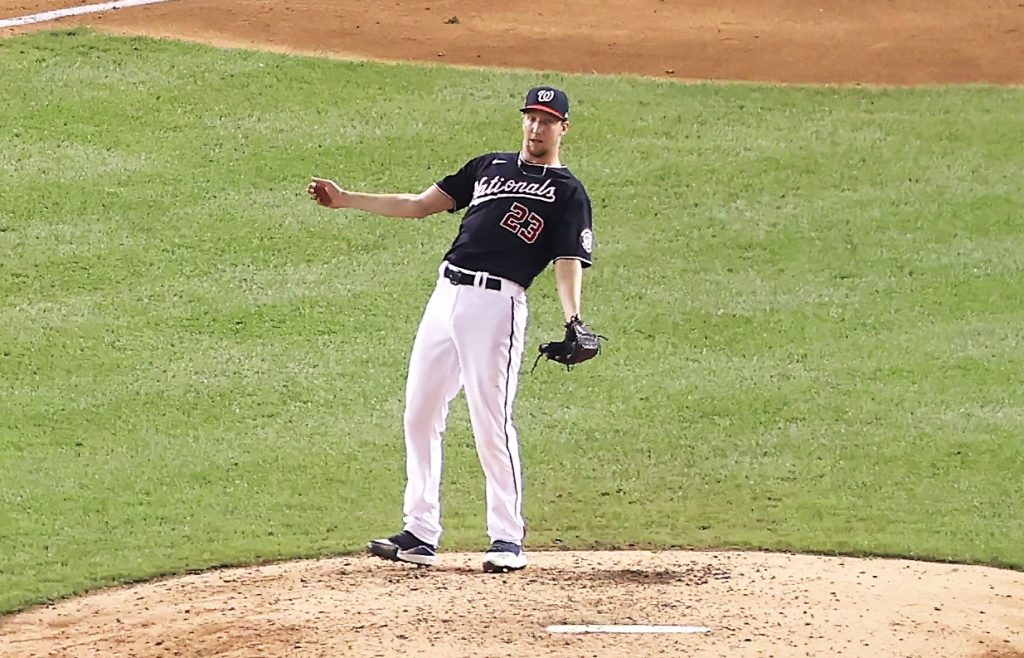 Is this offseason the end of the line for Erick Fedde with the Nationals? (Photo by Sol Tucker for TalKNats)

The 2022 World Series is in the books as the Houston Astros, playing in their fourth Fall Classic out of the past six, defeated the Philadelphia Phillies on Saturday, Nov. 5.

What does that mean for the Washington Nationals?

It means it’s officially about time to say goodbye to our free agents. Eligible players file for free agency on the day after the World Series every winter. For the Nats, those players are:

There is a five-day window during which free agents cannot sign with another team yet, but they can negotiate with the organization they are departing. To update: Doolittle is back with the Nats on a Minor League deal.

These departures leave the Nats with 36 players on the 40-man roster, although that number will likely soon be 35. More on that in a moment.

Also happening Nov. 10: Players under team control for 2023 must be activated and added to the roster, e.g. from the 60-day injured list. For the Nats, those players are:

This would, of course, put the Nats over their limit with 42 players on the 40-man roster. But that problem can be mitigated.

Additionally on Nov. 10, decisions are due on 2023 contract options for players. For the Nats, that is only Nelson Cruz, who has a $16 million mutual option. Cruz and the Nats would both have to agree to pick up that mutual option for him not to become a free agent. TalkNats had already reported last month through a source that Cruz’s option would be declined by the Nats. That seems unlikely after Cruz hit an underwhelming .234/.651 and didn’t take the field once before missing nearly the last full month of the season with an eye issue. He will likely instead receive a $3 million buyout and become a free agent. That halves the immediate roster crunch, but another move will be needed.

Official: The #Nationals have declined the 2023 Mutual Option on Nelson Cruz. We first reported this was going to happen on October 15. Cruz’s $16 million mutual option requires the #Nats to pay a $3 million buyout to sever ties with him. Cruz is now a free agent. https://t.co/tNvU9tZMGt

For obvious reasons, the Nats are not expected to offer any of their pending free agents a qualifying offer of $19.65 million. 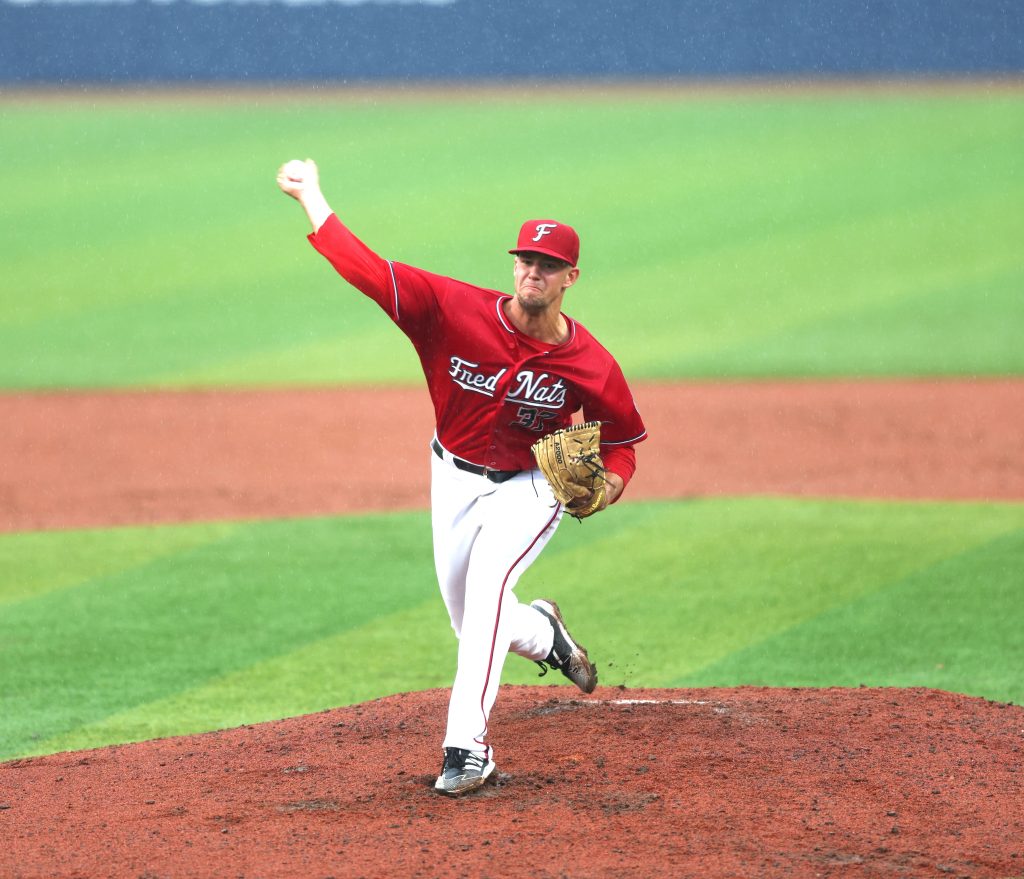 Will former first-rounder Jackson Rutledge be protected ahead of the Rule 5 draft? (Photo by Sol Tucker for TalkNats)

According to MLB Trade Rumors, Nov. 15 is the date by which teams must finalize their “reserve lists” ahead of the Rule 5 draft, selecting the contract of any eligible minor leaguers they want to protect. The following ranked prospects (by MLB.com, FanGraphs, and/or Baseball America) in the Nats organization are eligible for the Rule 5 draft unless added to the roster by Nov. 15:

Now, of course, the Nats’ 40-man roster is projected to be full, which would mean there’s no room to add any of these prospects to the roster. But they could clear some space by DFAing players or getting a jump on the next big decision date of the winter.

MLB.com reports an earlier-than-usual deadline for when decisions are due on whether to tender 2023 contracts for players under team control who do not already have a multi-year contract. It will be Nov. 18 For the Nats, the only players on a guaranteed multi-year contract entering this offseason are Stephen Strasburg and Patrick Corbin. The following players are eligible for salary arbitration:

Of these players, the Nats seem overwhelmingly likely to tender new contracts to Edwards, Finnegan, Harvey, and Thomas. There’s some room for debate with the rest, although it’s not out of the question that any or all are tendered a 2023 contract.

Arano struggled with injuries, as he so often has in his career, and was generally mediocre as a middle reliever. Fedde, a former first-round pick, had arguably the worst season of his career, capped with a nine-run nightmare in his last start of the year. Robles, as per usual, was a valuable asset for the Nats on defense but was one of the least productive batters in the league. Vargas got off to a strong start after a midseason callup but slumped badly at the plate down the stretch. Voit underwhelmed after being acquired midseason from the San Diego Padres, and the large raise he would be due in arbitration may be too rich for the Nats’ blood.

The MLB Winter Meetings begin in San Diego on Dec. 4. The ensuing week typically sees a sharp uptick in offseason activity, including trades, free agent signings, and club announcements. This is presumably the week in which MLB owners will consider whether to approve a change in the Nats ownership, if a deal can be presented to them in time.

On Dec. 7, the Rule 5 draft itself will close out the Winter Meetings.

Turning the page to 2023, the filing deadline for 2023 salary figures for arbitration-eligible players is on Jan. 13. The Nats have traditionally been what’s called a “file-and-trial” team, meaning that if the team and players haven’t agreed on a salary by the deadline, they will go to arbitration. Still, there is no rule to prevent teams and players from continuing to negotiate and reaching an agreement after this deadline. 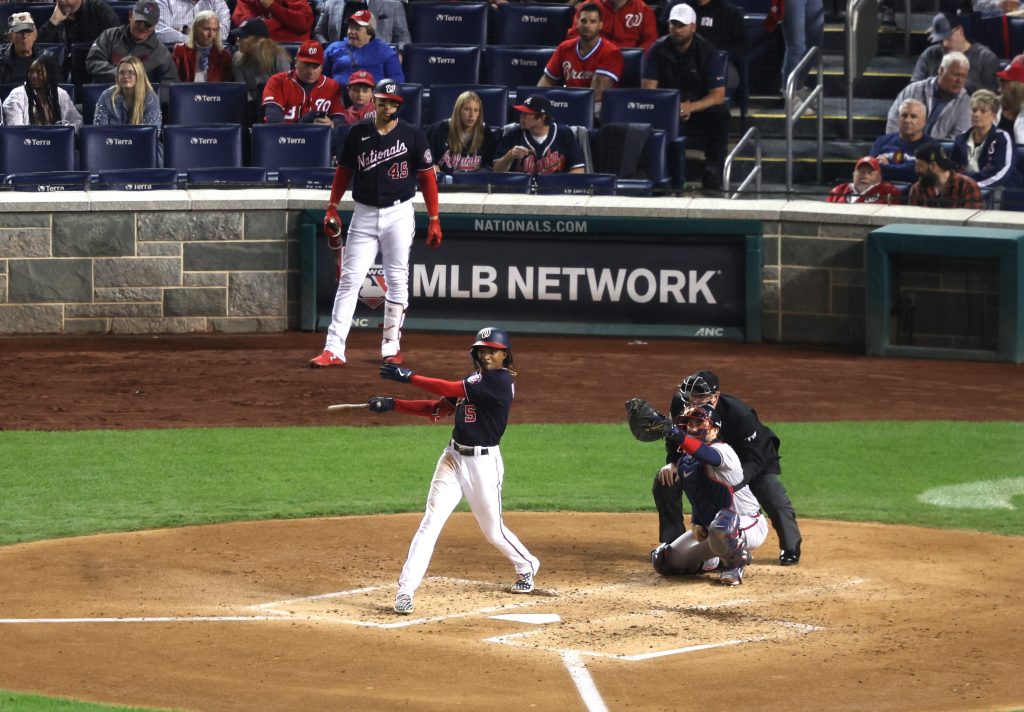 CJ Abrams is already preparing for his first spring training with the Nationals. (Photo by Sol Tucker for TalkNats)

The Nats’ first game of Spring Training is scheduled for Feb. 25. By the time spring camp opens, teams generally have the bulk of their offseason work taken care of, but as we’ve seen in recent years, the offseason continues for the Nats up until Opening Day. Don’t be surprised if the Nats are continuing to pursue free agents well into Spring Training, especially if the market moves slowly this winter.

Players can also be placed on the 60-day injured list starting in Spring Training, removing them from the 40-man roster.

Opening Day is March 30. By that date, the Nats must have winnowed their active roster to 26 players. Of those currently on the roster, these players are ineligible to be optioned to the minor leagues and must either be carried on the active roster, traded, placed on an inactive list such as the 60-day injured list, or placed on outright and/or release waivers:

Of these players, Cruz is not expected to still be with the Nats, and Rainey and Strasburg are expected to be the 60-day injured list, meaning they won’t be taking up a roster spot.