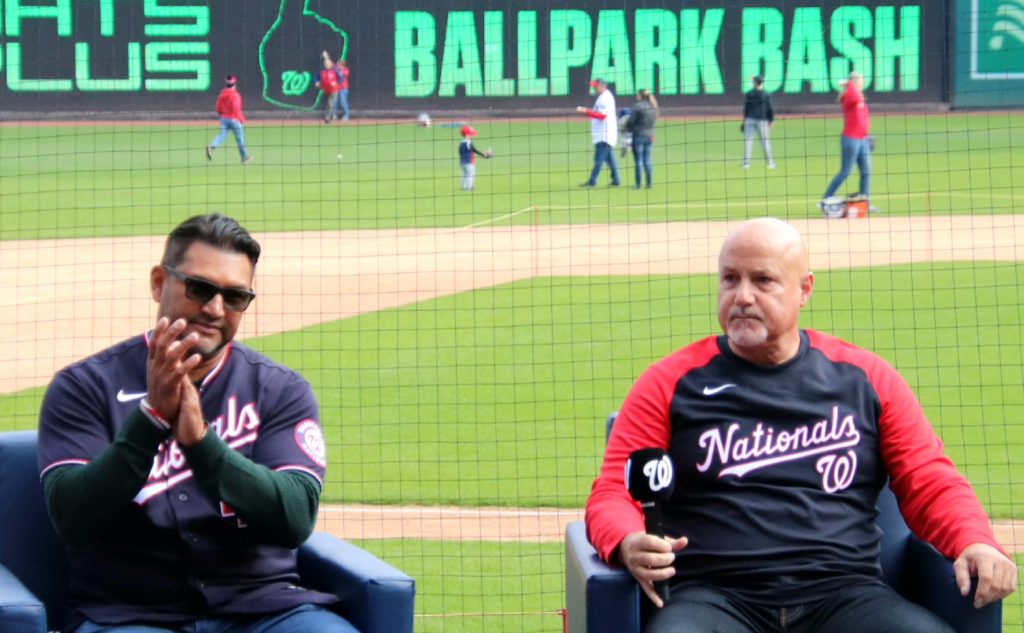 On the three year anniversary of the Washington Nationals first World Series win, the team invited season ticket holders to a new event called the Ballpark Bash. In attendance were manager Dave Martinez, general manager Mike Rizzo, and three members of the 2019 World Series team: Sean Doolittle, Kyle Finnegan, and Matt Adams. Of course, we were most interested in the Q & A session because this event had no pre-packaged questions.

These are the paying customers asking the questions, and some of the questions were tough ones. Rizzo was asked about why Austin Voth excelled after being picked up by the Orioles and the rumors of the O’s having better analytics which led to Rizzo defending his team’s analytics and pointing to that Voth’s success had been in a small sample size and could be compared to Hunter Harvey’s success with the Nats.

"Why did you not keep Juan Soto" — Nicholas 🤣 pic.twitter.com/c5mJAPH8Ai

Rizzo also pointed out that the offseason process really gets going next week with the General Manager’s meeting.

Another question delved into that trade proposal from the Astros in 2018 for Bryce Harper, and Rizzo was quick to point out how he turns down trades all the time that nobody ever hears about. He asked, how many of those proposed players that former Astros’ GM Jeff Luhnow named in the proposed Harper scenario, made it to MLB and made an impact. Rizzo said they had a flurry of offers for Harper and none of them were good enough for the team to have done a deal.

On Joey Meneses for next season, Davey said he sees him as a first baseman and a left fielder in the future. He said he was excited about Meneses and Lane Thomas and a young controllable core of CJ Abrams, Luis Garcia, and Keibert Ruiz. Davey said he is hopeful that Riz can get him another big bat, and a starting pitcher or two.

Our own Andrew Lang asked Rizzo two questions: 1) Would you consider extending Abrams? 2) How is Abrams’ shoulder after he hurt it at the end of the season?

“Yeah, I’d like to,” Rizzo said with regards to extending Abrams long-term. That received applause from the people in attendance.

“He’s good. He will be ready to go in Spring Training on February 15th,” Rizzo said in regards to Abrams’ health.

Rizzo spoke about having a younger and more athletic team that will play better defense and help their pitchers in run prevention. Davey agreed with Riz that better defense helped the pitchers towards the end of the season.

They spoke about how players all got offseason plans on what they need to work on before they arrive for Spring Training. Davey said that Spring Training this year will be a repetition of working on fundamentals. Rizzo spoke to that many of the players in the current system will be on the Nats next championship team.

Davey shared a story that he had with Meneses when he asked him why he didn’t make it to MLB earlier, and Meneses responded it was because he was blocked by some guy named Freddie Freeman.

Both Martinez and Rizzo are excited by the players they have and continuing on some of the successes. Lang pointed out to them after the Q&A ended that the Nats had a winning record (9-7) when Ruiz, Abrams, and Meneses all started in the same games. Rizzo said, “I read that on a site.” Lang responded, “TalkNats?” Rizzo responded, “I think so.”

For reference, here’s that article we published on October 4, 2022.