The 2022 acquisitions to the Nats’ system were transformative! 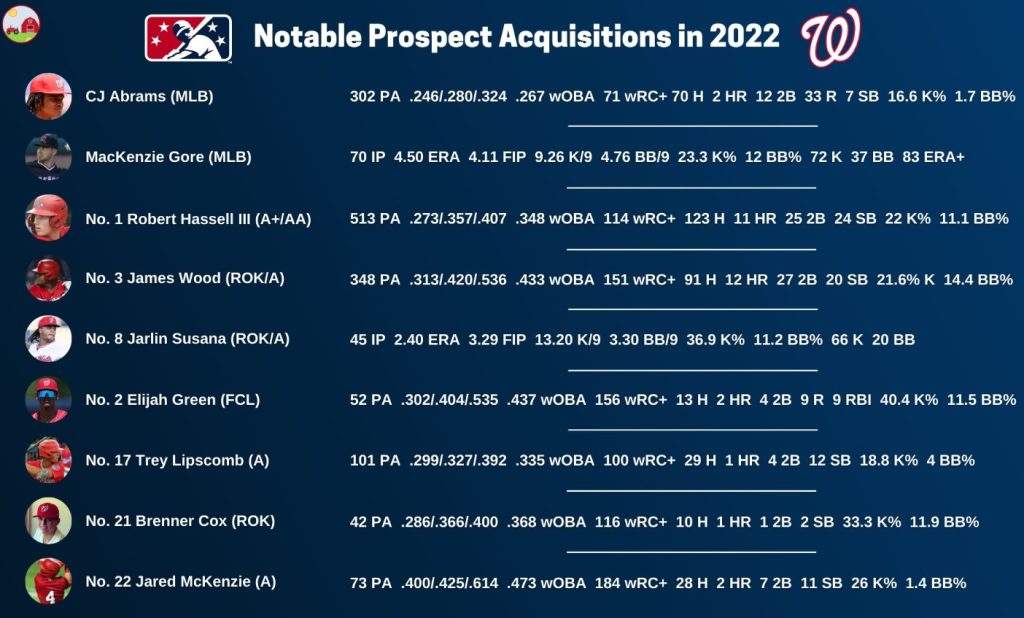 Before the 2022 draft and trade deadline, the Washington Nationals farm system was getting ranked as the worst farm system in baseball. It had been as high as №22 by MLB Pipeline right after the 2021 trade deadline when the Nats traded for Josiah Gray and Keibert Ruiz — and they still met their requirements as prospects.

The 2022 acquisitions, to the Nats’ system, were transformative. Those prospects came via the top of the 2022 draft, and the trade of Juan Soto to the Padres that netted five blue chip young players for the Nats. At FanGraphs, the Nats jumped to the №8 farm system in early August after they re-ranked with the newly acquired players, and before CJ Abrams reached his rookie at-bat limit (130 ABs).

While Abrams and MacKenzie Gore do not qualify as prospects anymore, the Nats farm system is in the Top-12 of all teams by a few analysts. That is in the top 40 percent of all teams. You could certainly debate if that is right or not, but due to injuries and some up-and-down performances, it feels like a fair spot for the rankings.

Let’s face it, a №12 ranking is a lot better than №30. In fact, if you squint far enough into the future with an optimistic eye, the farm system should get another positive jolt from drafting near the top of the 2023 draft. Okay, maybe Cade Cavalli graduates to rookie status and comes off of the rankings, but the rest stay on.

Since the various analysts have differences in their top prospect rankings, we got maybe our best explanation for what happened to Robert Hassell III when TalkNats broke the news that Hassell most likely broke his hamate bone in his right-hand and was later confirmed by the Nats. Hassell had been playing through the pain for months. That could explain his struggles mid-way through his season. On July 24, Hassell was batting .314 and his stats just seemed to go down from there. You can see some photos that he had his right wrist wrapped in tape when he was still in the Padres system before the trade. Some analysts don’t factor in injuries, and they just knock you down in the rankings. Hassell went from the №1 to the №3 prospect in the FanGraphs’ rankings. The same with Brady House who suffered a back injury and missed most of the season and fell on every analyst’s rankings. Oddly, FanGraphs has Cole Henry as their 95th prospect in baseball, and he had thoracic outlet surgery. 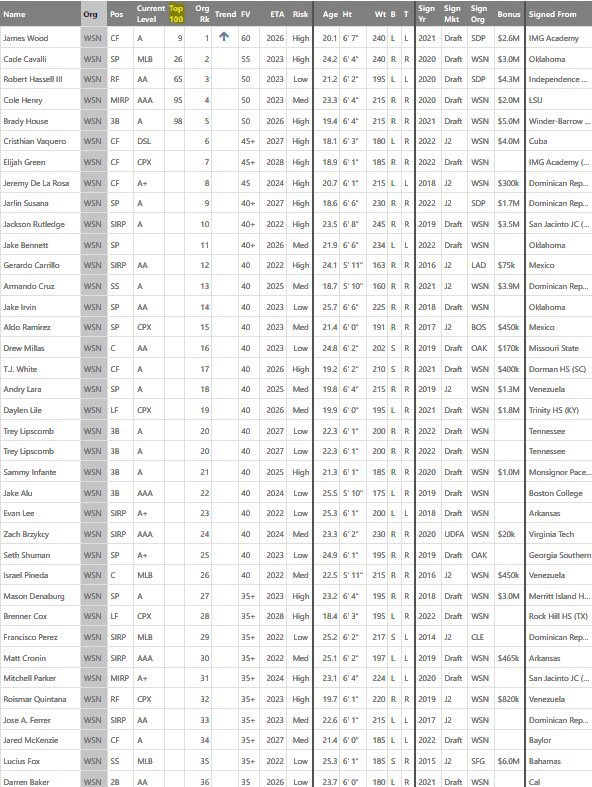 At MLB Pipeline, they still have Hassell as the Nats’ top prospect followed by the 18 year old Elijah Green who was the Nats top draft pick of 2022 at №5 overall. FanGraphs is not as bullish on Green who they rated as a 45+ and outside their Top-100. At Baseball America, they rank in order: Hassell, James Wood, and Elijah Green who are all Top-100 players. It is Wood who FanGraphs has as their top prospect in the Nats’ system. He came over in the trade with the Padres and showed off his tools in Class-A Fredericksburg. Many have compared him to Aaron Judge due to their similar frames and athleticism.

This rebuild will only be as successful as the sum of the parts. Those parts are mostly in the minor leagues as the Nats’ core seems to begin with Abrams, Ruiz, and Luis Garcia in the youth movement. There is no Ryan Zimmerman in this rebuild unless you think Joey Meneses is the guy. We will see. Ryan Clary of the Locked On Nationals podcast gives a good look into the future with a discussion of the 2022 acquisitions.

Yes, everyone has an opinion, and you do not have to agree. You don’t even have to be optimistic. There are reasons to not trust this player development system. But if you trust the analyst’s rankings and notes that we linked, the future looks much brighter than it did just three months ago in a controllable core. For all of us who wanted Soto, his team control ends in two years, and now the team has a deep youth movement of players with team control stretching well into 2026 and beyond. I think the Nats got a generational haul for Soto — but only time will tell! This rebuild will take time. Have patience, and we will see how this all comes together.