Posted on September 8, 2022 by Granit Rocmonster 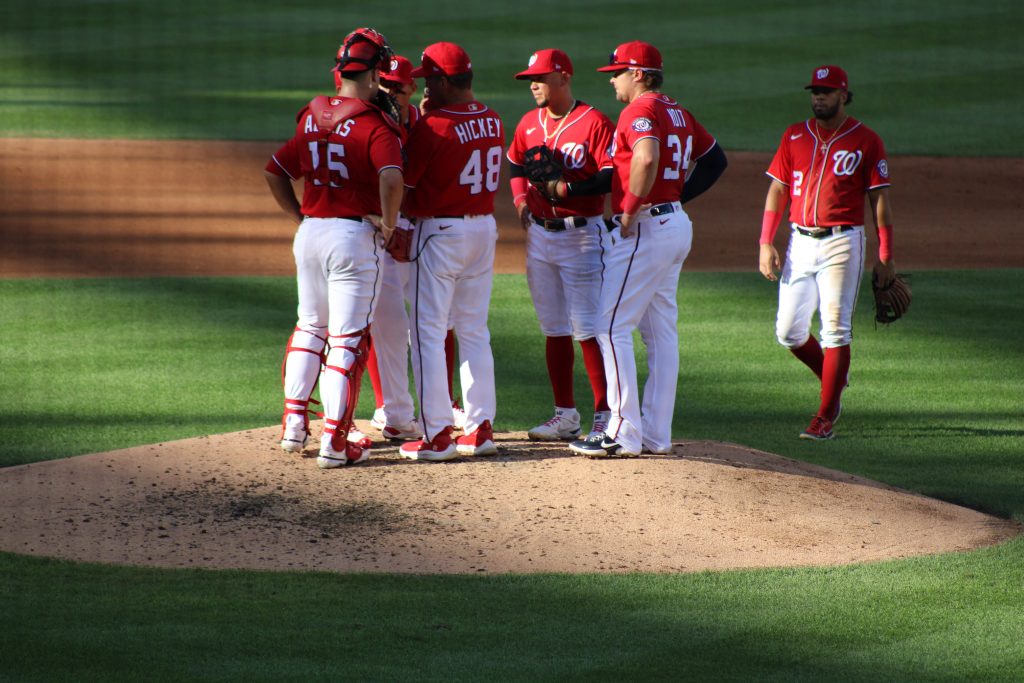 On the heels of last night’s loss in St. Louis (and how much of the blame we can ascribe to Kyle Finnegan not pitching in a week), I thought it might be interesting to resurrect and update an idea for managing a rotation and bullpen that I first developed roughly a decade ago when Tim Lincecum stopped being a dominant pitcher for the Giants. As the use of pitchers continues to evolve, it is worth examining different methods for maximizing value and protecting the health of one’s arms. We know that the Nationals under Mike Rizzo are especially old-school in their approach to pitching and how to utilize individual pitchers (both starters and relievers), so this will merely be an academic exercise. Still, hopefully it will provoke some useful thought and discussion among the baseball junkies on this forum.

The “traditional” construction of a pitching staff over most of the past three or four decades has been to have five starters that you hope to get five or more innings out of, buttressed by a bullpen with five to seven guys who come in with the intention of going max effort for either a complete inning or to complete an inning started by the pitcher who came before them, one of whom is ideally only used to pitch the ninth inning with a lead of one to three runs, plus one or two last-ditch “break glass in case of emergency” guys capable of pitching two to four innings should a starter flounder early or a game go into extra innings (less of a concern now with the Manfred Man rule). Some teams, most notably the Rays and occasionally the Brewers, now sometimes use an opener to pitch an inning or two at the beginning of the game before handing off to another pitcher who will take the next four or five frames (and the Rizzo/Davey Nats have done this! – largely when availability has forced them to), but those examples are still pretty rare throughout baseball. However you slice it, teams need to find a way to cover roughly 1400-1450 innings per season (162 x 9 = 1458, and then add extra innings and subtract the ninth innings of road losses).

Given that the Nats have several pitchers in the organization who are either young and developing (MacKenzie Gore, Josiah Gray, Cade Cavalli), kind of in a nebulous zone as to whether or not they can stick as a true starter/have the ability to go multiple innings out of the bullpen (Jackson Tetreault, Evan Lee, Paolo Espino, Cory Abbott, Hunter Harvey, Mason Thompson, Mitchell Parker), or hampered by injury or ineffectiveness in a starter’s role (Patrick Corbin, Stephen Strasburg, Cole Henry), the basis of the idea is that the Nats should continue the current experiment with a six-man rotation, but going into 2023 reconfigure the bullpen so as to have three or four pitchers (ideally two righties and two lefties, but two and one is fine also) who would be called on to pitch roughly once through the order (2-3 innings) while never appearing on consecutive days, and then three or four one-inning arms who get thrown into the highest-leverage spots and CAN be counted on to pitch on consecutive days. The objectives of constructing a pitching staff this way would be fourfold: to get extra recovery time for your youngest and most valuable arms in an era when almost every pitcher goes max effort on every pitch and injury rates are very high (this would be even more important with the coming pitch clock, which will limit recovery time between pitches); to maximize the value of pitchers who are capable of giving some length but perhaps lack the stuff or stamina to truly stick in a traditional rotation; to have plenty of insurance for those games when the starter just isn’t as effective as hoped for; and to provide more flexibility for when to use the best bullpen arms who are most effective in one-inning stints (rather than the staid setup and closer roles).

Let us examine what this could look like for the 2023 Nationals, but first, bear with me as we make a few assumptions about who will be around. First, we know that there are thirteen roster spots that can be allocated to pitchers, and we’re going to identify six starters and seven relievers, plus a few depth options that can be called up as necessary throughout the season. Let’s assume that Henry will be pitching again by Memorial Day, but Strasburg will not (I am very much in the camp of “you can’t count on anything from him at this point, whatever you get is gravy”). Let’s assume that the Nats sign Sean Manaea to bolster the rotation, extend minor league spring training invites to Aníbal Sánchez and Sean Doolittle, decline the option on Jake McGee, and re-sign Erasmo Ramírez. After all of that happens, here would be the list of pitchers to evaluate in the spring (italics indicate someone who would not be entering spring training on the 40-man roster):

A six-man rotation comes out to twenty-seven starts per pitcher, and if they average five innings per start (MLB average this year is 4.96) that means 135 innings each, and 810 of the 1400ish innings to get through a season. We know that won’t work out perfectly, but bear with me as we work through the math. Of that group above, who should be the six primary starters? Gore, Cavalli, Gray, and Manaea would be locks, with Fedde and Corbin near-locks to round out the six (we have to be realistic and consider that Davey will continue running Corbin out there as a starter as long as possible, even though the vast majority of this community would rather move on from that). That’s a rotation with three pitchers from each side, interestingly enough. That leaves fifteen guys to consider for the three or four multi-inning roles, whom I’m imagining averaging 1.6-1.7 innings across sixty-five appearances or so (105-110 innings apiece, 420-440 from the group, which gets us to 1230-1250 for the staff). Right now I would put Lee, Thompson, Seth Romero, and Ramírez in those spots (two lefties and two righties), with CEJ, Harvey, and Finnegan reserved for the three high-leverage spots (who need fifty-sixty innings each to get the team to the finish line. This would not quite do away with a traditional closer, but the point of the one-inning guys would be to use them in the most crucial spots regardless of the inning, and they could then be followed by one of the long men (whose stuff would be playing up in the idealized scenario). You can play with the names in the places.

Given the names above, a six-man rotation and commitment to more long reliever usage would hopefully protect the prized arms (Cavalli/Gore/Gray) from overuse, and provide a role for someone like Henry or Seth Romero to use their starter’s repertoire in fewer innings (and have their stuff play up), as well as provide Davey/whoever the manager is with the flexibility to follow a starter with a long man who might have totally different styles (imagine going from Gray’s fly ball-heavy pitch mix to Thompson’s heavy sinker, or Aníbal’s soft tossing to Tetreault gunning it up to 97 for two innings out of the pen. Maybe a swingman-type role is the perfect way to fast-track Jarlin Susana through the system and have him provide value to the major league outfit or test him in the higher minors with his incredible stuff while not blowing past an innings limit.

This kind of setup could work with a more standard five-man rotation as well (with one more one-inning guy instead and/or a little more reliance on the long relievers). The point is that the Nationals need to operate with more flexibility in how they approach pitcher use as an organization, both because of the people that they have in the organization and because pitching is evolving. The 2019 Nats, who got 750 innings from just four guys (Strasburg, Corbin, Scherzer, and Sánchez) are more likely a part of the past than a part of the future, and the franchise needs to examine more ways to better maximize the talent that they have on hand.