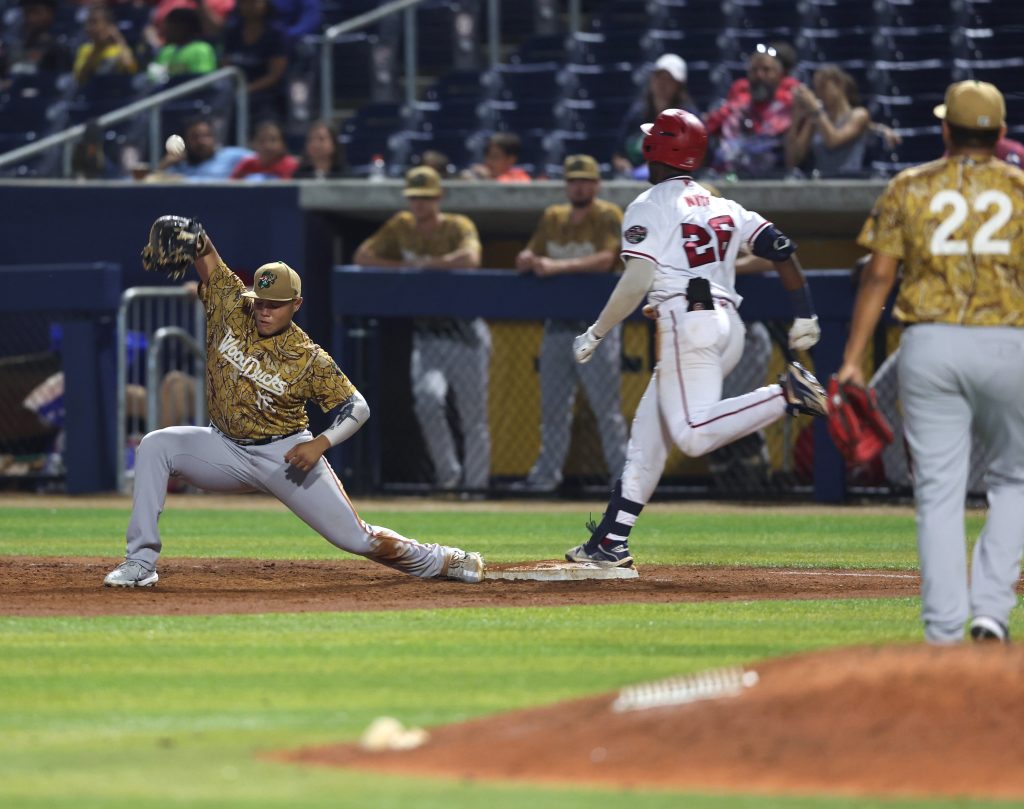 TJ White has speed as one of his tools; Photo by Sol Tucker for TalkNats

The Washington Nationals are in a position where it is am opportune time to look forward to the players in the farm system during this rebuild. After the trade deadline and 2022 draft, the Nats added some extremely talented big-name prospects to their organization.

If we look past all the gigantic stats that those top prospects are putting up, we can see some other prospects not getting the same attention. Below are ten players to keep an eye on in the Washington Nationals organization.

White is currently in Single-A with the Fredericksburg Nationals. The outfielder is a switch-handed hitter with pop. It is super exciting because having a guy like him in the lineup that can hit from both sides is not fun for opposing pitchers. The teenager is currently hitting at a .777 OPS in Single-A and putting up big August numbers. He was drafted at the age of 17 and in his first full season while dealing with the minor league adjustments and learning. He was drafted in the fifth round of the 2021 draft because of his power and athleticism. As he matures in the minors, look for his power and pop from the bat that he will bring to any farm team he is on, and he can even swipe you a base!

The 4th round pick in the 2022 draft for the Nats was Brenner Cox. The 18-year-old outfielder has a plus arm and has plus speed. Currently with the FCL Nats, he hit .286 in his short stint in Florida. Cox has shown some great swings from the left side of the plate. Only ten games into his professional career, it is clear the very young prospect is going to be turning a lot of heads soon. Get on the bandwagon now.

Early in 2022, the Nats signed SS Jorgelys Mota to a minor league contract from international free agency at 16.  The 6’3 athlete is now extremely tall for a teenager who just turned 17 in June. He is currently playing with the DSL (Dominican Summer League) Nationals. Not even technically an adult yet, he is hitting .262. With many years to grow in the Nats minor league system, watch out for Mota, because this kid has raw talent.

On April 8th, 2022, Riggs Threadgill joined the Fredericksburg Nationals. The right-handed reliever has posted solid stats across the board, especially for a 22-year-old. Batters so far this season are only hitting .236 off of him. Also, in his 35 appearances he has only given up three homeruns. Riggs Threadgill should be a name to watch looking forward for the bullpen.

The right-handed starter, Jake Irvin, was drafted by the Washington Nationals in 2018 and lost time in 2020 Covid void. The 25-year-old is currently starting games for the Double-A affiliate,  Harrisburg Senators. While the visit in Double-A has not been the best for him, there are some things to look forward to. For example, his K/9 is something to look at it. In the 2022 season, his K/9 is 8.93, which is his career high so far. Next year should be the year for Irvin that determines whether he can be a viable major leaguer.

The big knock-on catchers in years past for all teams, is that only a few of them can hit for a solid average. Pineda was another victim of the lost Covid 2020 season and he struggled in 2021. But this year he’s shown that he could be a future breakout player. Throughout his time in Double-A so far, Pineda is hitting .286 with an OPS of .880. Yes, .880.  The 22-year-old is also a stud behind the plate, with a fielding percentage of .992 throughout his career so far. If he keeps up his great hitting in the minors, look out for Israel Pineda in the years to come.

The 21-year-old SS is a switch hitter that hits solid from both sides of the plate. Pena is the type of player that works very hard and grinds at the plate. For an under-sized guy, he has surprising pop from the bat. Do not be surprised if we see Pena called up in the next few years and be a solid utility player for the Nats, or possibly more than the player he’s compared to — Wilmer Difo.

In 2017, the Washington Nationals signed Jose Ferrer to a minor league contract as an international free agent. While his namesake was well known as Cyrano de Bergerac, this Ferrer is no actor. In 2022, he was with the Fredericksburg Nationals and has been recently promoted to the Wilmington Blue Rocks. He can be a very strong 8th inning type of RP or even a closer, as he has racked up some saves with the Blue Rocks. Ferrer has so much strike out material that his K/9 is 11.86 so far in his career. The young pitcher is only 22, as Ferrer develops even more, he will be gross.

The 23-year-old second basemen is the most well known player in the Nats system and was the pick for this year’s All-Star Futures game. He currently is playing with the Harrisburg Senators in the Nats organization after a promotion from High-A. The left-handed hitter is hitting .295 with the Senators while also being a super solid defender at the same time. Baker could be the perfect lead-off hitter for that Nats in years to come. Of course, getting help from his dad, Dusty Baker, will help him develop quicker than most.

Jacob Young was drafted to the Nats organization just last summer, he is now playing with the Fredericksburg Nationals. The OF is only 23 years old, so he has some more time to develop. His hitting as of late has looked super solid, as he is hitting .289 in the month of August. The young athlete is also a very strong defender. Do not be surprised if you hear his name more in the future. He uses his hit and on-base tools along with his speed to get himself into scoring position, and it’s already got him over 100 runs scored and that’s super impressive.