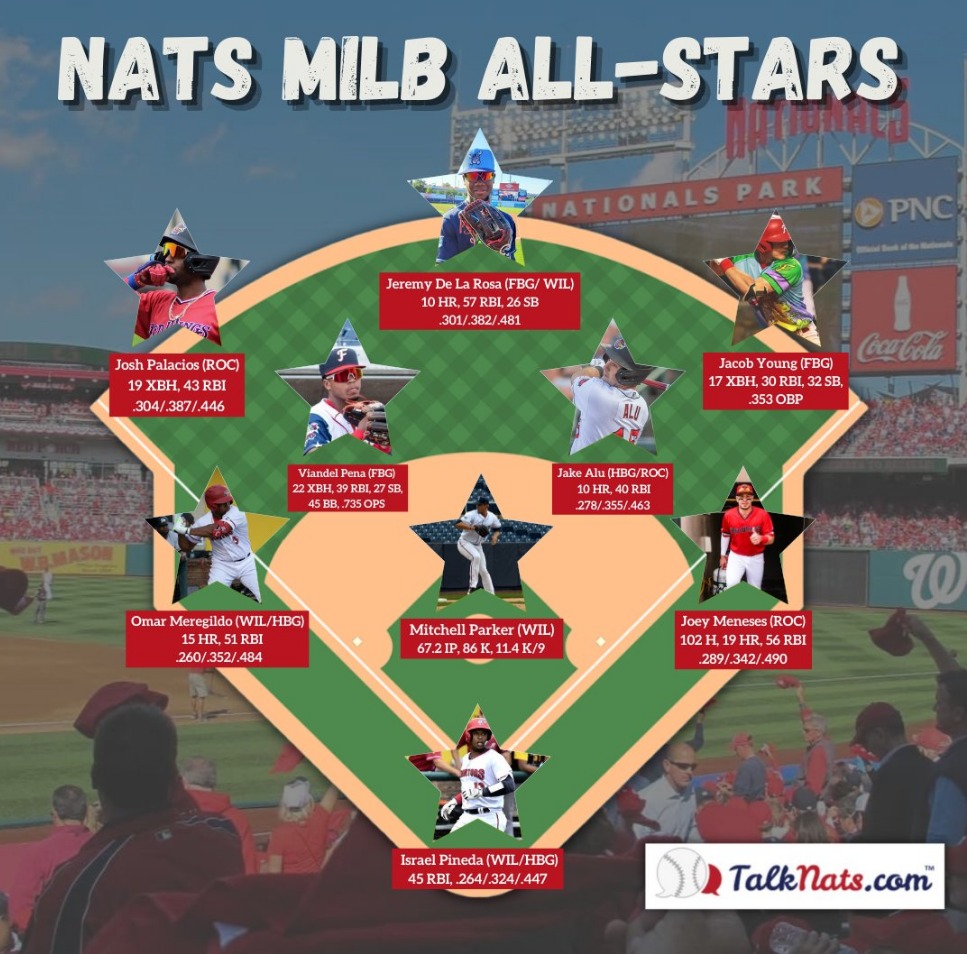 Even though the season has been subpar for the Nationals, that does not mean that everything is terrible for the organization. In fact, the minor league affiliates are far more successful than seasons past and have seen numerous players performing admirably. However, to say that the Nats’ affiliates are filled to the brim with exemplary performers is quite the stretch. Numerous prospects are under-performing; a trend that will hopefully cease to continue. Although there is no formal All Star games for the respective minor league divisions, some players deserve recognition. Some of these players are top prospects while others are unfamiliar to many fans who are not as keenly following the next-gen Nats. Regardless, the entire organization looks to these players to not only continue their performances thus far this season but make their way up the ranks and play at this level for the Nats.

The Nationals’ #15 prospect has been putting on a clinic this season with Wilmington. Recently, he earned a well-deserved promotion to AA Harrisurg, but that was only after dazzling at High A. The stats speak for themselves as he not only leads the entire Nationals farm system with 86 punchouts, but he ranks in the top ten in innings pitched. One of the biggest knocks against Parker in the past has been his control, but he has seen a major improvement in his walk rate. The most encouraging metric for him, though, has been the lower batting average against fastball. His heater only registers in the low to mid 90s and has been rather hittable in the past. This season, his fastball command both within and outside the strike zone has been much improved, leading to better results. The promotion to Harrisburg demonstrates the fact that he has been putting everyone in the organization on notice and the expectation is now for him to continue dominating.

Pineda has been a name that Nats fans have tracked for years. Before the organization loaded up on catching depth, Pineda was seen as the next hope behind the dish. However, Pineda’s development stagnated, and he faded into the “minor league abyss”. Nonetheless, he has put his talent on full display in the first half of the 2022 season. As the #24 ranked prospect in the Nationals’ organization has driven in 48 runs this season between High A and AA, slotting him at #7 in the entire farm system. The majority of his damage has come at Wilmington as he was only recently promoted. The biggest thing holding back Pineda was his lack of hitting prowess; he hit below the Mendoza Line in both of the last two full minor league seasons. Now, he has unlocked the ability to hit for average and get on base at a career-best rate. Although the Nationals’ have a ton of catching depth, Pineda’s strong start could be a sign of things to come and a potential backup gig in the future.

Joey Meneses has been one of the biggest revelations for Rochester this season. The 30-year-old has never made his MLB debut, but he appears to be primed for that after the Trade Deadline. With the impending Josh Bell trade, Meneses looks to be one of the most qualified players to take over. The 30-year-old has bounced around different minor league systems but has found a home with the Nats. Meneses is incredibly similar to Yadiel Hernandez. Both of them hit for average and extra base hits but are lacking in the field. As a pure hitter, Meneses will not wow anyone at first base, but he more than makes up for it with his above average ability to make contact with the ball.

Even though Jake Alu has never appeared on a top prospect list, he has done one thing consistently as a professional: hit the ball. Alu might not be the most dynamic athlete, but he produces results that require recognition. The Nationals had him all the way down at High A ball as recently as July 2021. As is routine with Alu, he simply hit too well with Wilmington to remain at the level. A promotion to Harrisburg was something of a challenge, but this season saw him get out to a blazing start. Currently, he is at AAA and has seen a slight learning curve, but, like previous times, Alu should figure it out and rise to the occasion.

The Nationals might be slightly lacking for shortstop depth since Brady House went down with injury, and with an incomplete season, House did not make this list. But Viandel Pena has produced admirably. Pena has long been a development project at the plate, but his elite speed has enhanced his game, much like it did for players like Trea Turner. This is not to say Pena is anything like Turner, but they have similar play styles with the elite speed and ability to spray the ball to both gaps for extra base hits. Moreover, the 21-year-old has drawn the second most walks in the organization this year, leading to a lot of excitement internally. The Nationals hope to see him continue producing with Fredericksburg before moving him up to the higher levels of the minors.

Omar Meregildo has been one of the most under-the-radar hitters in the minor leagues thus far in 2022. His recent promotion to AA further illustrates the impression he has made on the front office with his offensive outburst. He has hit the second most home runs in the system, only trailing Meneses. Additionally, he has been able to use the entire field and make an impact on the games. His defensive versatility has also reared its head in a positive manner. Meregildo is not a great defender, but his willingness to play both corner infield spots allow him to stay in the lineup when promoted.

The former Blue Jay has been a great pickup for Mike Rizzo and the entire front office. With a little bit of MLB experience, Palacios has defied any expectations for him and raked all year with Rochester. If there were not such a massive logjam in the outfield, all likelihoods point to him being with the Nats right now. Regardless, he has batted incredibly well with his high contact abilities and prowess with runners in scoring position. Whether or not he factors into the future plans of the team, Palacios’ first half performance has been enough to turn heads in the organization and provide him with the potential to find a path to the MLB once again with the Nats.

If there was a player who was deserving of recognition for his excellent first half, it is certainly Jeremy De La Rosa. He has been able to find the promise that the Nats saw in him when they signed him at the age of 16. He has limited strike outs, one of his major deficiencies in the past, and kept his power stroke intact. Additionally, he has swiped over 30 bases in just the first half of the season, something that has become a lost art in the MLB. In the field, he has been superb. Moreover, the Nationals, who had been using a patient approach with him, decided it was time to move him up to Wilmington. He has taken a little to adjust to the new level but has shown flashes of his play at Fredericksburg.

Young was drafted a little bit more than a year ago but has not taken long to find his stride in the minor leagues. A seventh-round pick from Florida, Young relies heavily on his elite speed to impact the game. This is reflected in his 32 steals thus far. The combination of Young and De La Rosa in the outfield for Fredericksburg at the top of the lineup poses a huge running threat that benefits the hitters below them, another thing seen in the hitting stats at Low A. Young has a lot of development left, specifically with his batting average, but the future appears to be bright for the outfielder.

Garcia is another one of the older players in the Nats’ system. He is 28 years old and has yet to taste the big leagues. Unlike others on the older side, he has never really hit quite this well. After breaking in with the Phillies at the age of 17 in 2011, he has never gotten above AA before last season. Nonetheless, he has been hitting very well this season and might just be able to get to the highest level of the minor leagues before long. His strikeout numbers are better than they were in the past and his ability to get on base has helped his game incredibly. Whether or not he continues this hot start to the season remains unseen, but it is certainly impressive, nonetheless.

While there are numerous others in the Washington farm system deserving of this recognition, these players are the cream of the crop with plenty of honorable mention to players like T.J. White, Darren Baker, Cade Cavalli, and Armando Cruz. Baker and Cavalli were the initial picks for the Nats All-Star Futures game. Cavalli was replace by lefty  reliever Jose Ferrer.

Regardless of prospect pedigree, all of these players hope to use the first half of this season as a jumping off point to a full season of production. While the majority of these players will not make it to the MLB, seeing minor leaguers play well is something that all Nats fans can be proud of and appreciate.

This entry was posted in Analysis, NewsAndNotes, Prospects. Bookmark the permalink.
← Previous Article | Next Article →