Ripped from the headlines, a message to the Yankees!

There are many who believe that the NY Post’s Jon Heyman, is a mouthpiece for agent Scott Boras. Is there a push to get Juan Soto to the Yankees? Heyman’s headline is “Yankees must be willing to do whatever it takes to land Juan Soto“ and that is a mouthful.  As a former voice for MLB Network, Casey Stern, said over and over “Prospects are cool — Parades are cooler.”  Stern championed this time of year to trade big to get the next Yoenis Cespedes that will get you to the World Series.

At first I did not think the Yankees fit as a trading partner for the Washington Nationals. Then I thought about why the Dodgers traded for Max Scherzer plus Trea Turner last year. They needed that pitching depth, so of course Scherzer made sense, but when you think about it, Turner actually made a lot of sense too even though the Dodgers had a star at shortstop.

The Dodgers took Turner, whose greatest value was at his shortstop spot, and shifted him to second base after he was acquired. But the Dodgers had a good idea that their starting shortstop, Corey Seager, was going to test agency and probably walk after the season, and Turner was their hedge if that happened — and it did. Seager signed a bloated contract with Texas, and Turner is shining as the Dodgers shortstop this year.  The Yankees have a similar issue with Aaron Judge as the Dodgers did with Seager. Judge reportedly already rejected a $230 million extension from the Yankees, and he is on a home run pace to get to rare air of 60+ home runs this year for the first place Yankees and sign a mega deal in free agency.

But let’s get back to Heyman’s thinking from his article that has so much to digest. This part is humorous with Heyman connecting dots in baseball history, “The Tigers certainly didn’t look back at whatever they gave up for Miguel Cabrera in 2007, and a few years before that, the Yankees had no misgivings about adding Babe Ruth.” Few years? Come on Heyman, Ruth was not a few years before Cabrera. Ruth was traded in 1919. That is 88 years apart.

What writers fail to mention is that Ruth won three World Series for the Red Sox before he was traded. Nobody compared to him. The Bambino also wasn’t traded because he turned down the equivalent of $440 million for 15 years in 1919. That total contract would have been worth $25.5 million back in 1919 or roughly $1.7 million a year. The Sultan of Swat made nowhere near that equivalency.

Ruth was traded for no prospects, just $100,000 in cash so the Red Sox owner, Harry Frazee, could finance a musical called No No, Nanette that proceeded to flop! Ruth was only making $5,000 a year and the Yankees paid him $10,000 his first season and he got to $80,000 later in his career, more than Herbert Hoover, the President of the United States, and Ruth replied that he had a better year than the President. That $80,000 would be worth only about $1.3 million this year. It gives you an idea how far baseball salaries have grown and past inflation compounded.

Part of the rumor being spread by Heyman and others is that the Nats want to package Soto with struggling Nats’ pitcher Patrick Corbin. You hope that is not accurate. After this season, Corbin’s deal just has two years remaining. He is still able to eat innings, and his advanced stats still say he can play better with a good defense behind him. Soto should be traded solo. Just Juan. Get back the best package of prospects that you can put together.

Heyman goes on to write, “The Yankees should be able to do this deal, if they are willing to give up most of their very top prospects. Early word was that they don’t want to surrender all three of Anthony Volpe, Oswald Peraza and Jasson Dominguez, plus more, but maybe they need to be less judicious in this one case. They are said to be willing to take on a “bad” Nationals contract if the prospects are right, and that could swing a deal their way.”

“One advantage to the Yankees keeping their payroll to an affordable $250 million — about $40 million below the spending leaders in Los Angles and crosstown in Queens — is that they are the rare team that could add both Soto’s $17 million and Patrick Corbin’s $23 million — and do it relatively comfortably.”

While Volpe, Peraza, and Dominguez look like good prospects, it is the “plus more” that has to be there. No disrespect to those fine young lads, but general manager Mike Rizzo gave up more in prospect depth to get Adam Eaton when he traded the №1 prospect in baseball, Lucas Giolito, plus his next top two pitching prospects in Reynaldo Lopez and Dane Dunning who like Giolito was a first round pick of the Nats. No disrespect to Volpe who is ranked №16 and Peraza №79 on Baseball America’s Top-100 list. Dominguez slid out of their Top-100 rankings and down to the 7th spot on the Yankees’ prospect list. 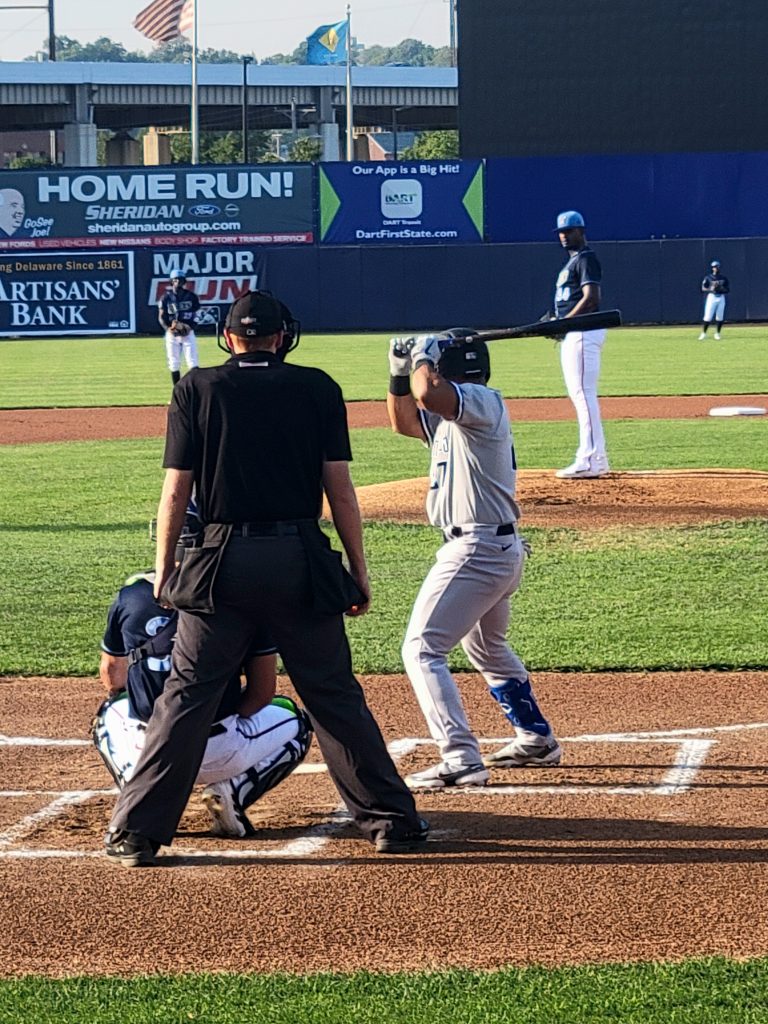 Those are all nice names, but sorry, that doesn’t come close to the Eaton trade, and Soto is being compared to Babe Ruth here. Rizzo does not have to make this trade, but some team hopefully is smart enough to see an opportunity here for control of Soto going three playoff runs.

Good to hear @Buster_ESPN discuss my theory on @ESPN https://t.co/Wo4OaQLygO

That is my working theory for any team trading for Soto. But then again, the Nationals don’t have to trade Soto, and if the Nats trade The Childish Bambino, it better be for more than just the top-2 prospects in a farm system. It takes more than one player these days to win. With the DH, it takes at least ten per game and 26 on the roster. While Soto is a great player, he is no guarantee to bring any team a World Series ring this year, but he certainly will make any team better.