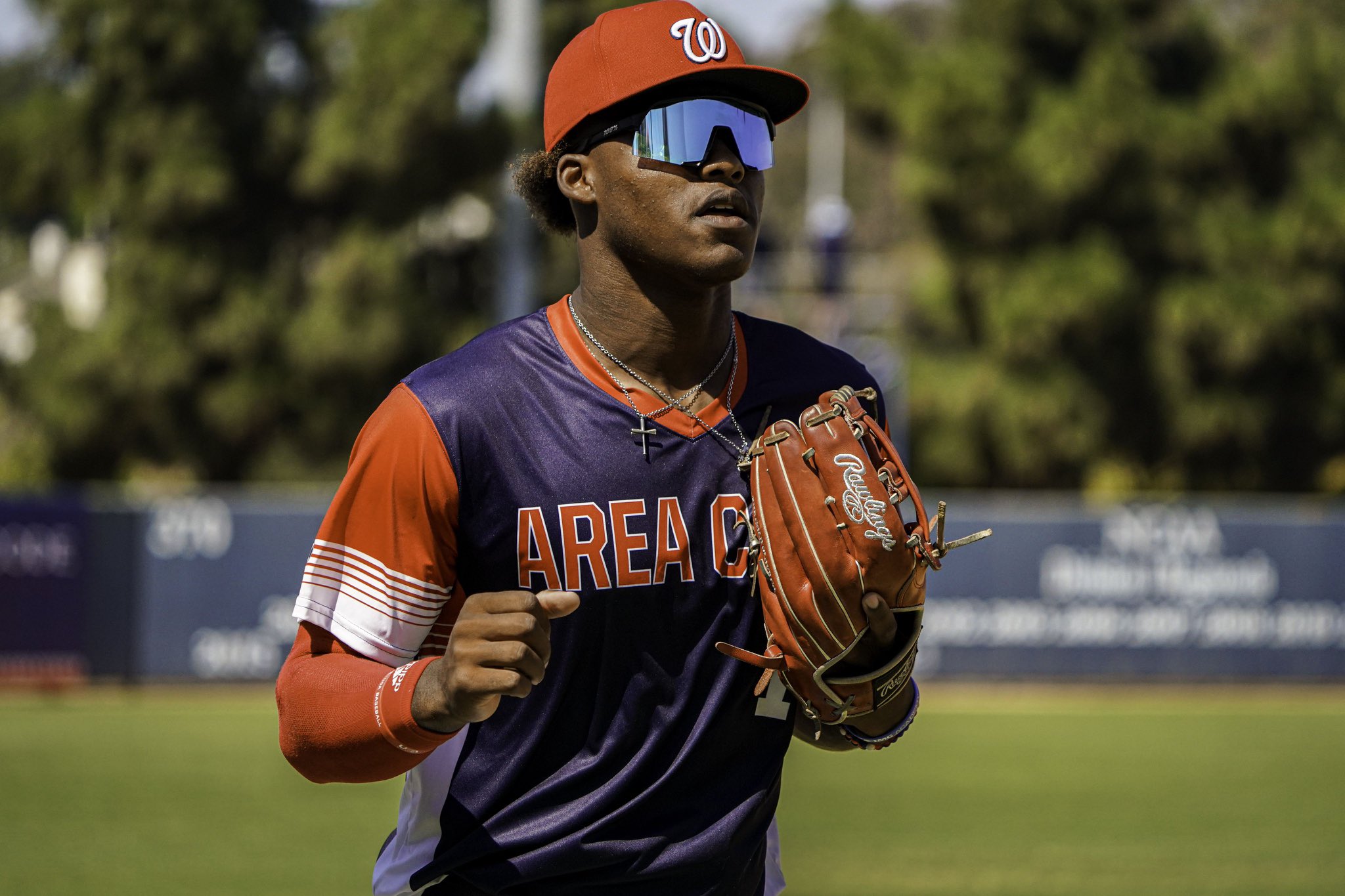 The Major League Draft can be overwhelming for fans as they watch their favorite team draft 20 players over the course of three days. Anyone who watched the draft broadcast on days two and three saw players picked at lightning speed – so quick that the analysts couldn’t keep up every once in a while.

In this, a short and palatable description of each player the Washington Nationals drafted in 2022 will be available.

As I’m sure you heard, Elijah Green has the highest ceiling of anyone in the draft. The son of a former Pro Bowl tight end, Green is 6′ 3″ 225 pounds and runs a 5.99 60 yard dash good enough to earn him 70-grade speed and the No. 3 overall draft prospect ranking from mlb dot com.

In 25 games at IMG Academy, one of the most competitive high schools in the country for baseball, Green slashed .462/.592/.1000 with nine homers, 11 doubles, and as many walks as strikeouts.

His skill set is the real deal. Now it’s up to the Nationals to properly develop the 18-year-old’s elite talent.

The Nationals originally drafted Jake Bennett out of high school in the 39th round, this time they took him a lot sooner. It just so happens that this is Bennett’s third go around as, Nats No. 1 prospect, Cade Cavalli’s “organization mate” as they went to high school and college together.

The lefty starting pitcher was tremendous in the postseason winning four of his five starts and leading the Sooners the College World Series finals. On the season, Bennett tossed over 100 innings while striking out 133, walking 22, and keeping his ERA to a respectable 3.69.

Standing at 6′ 6″ 234 pounds he’s a menacing figure on the mound and although he doesn’t throw as hard as Cavalli, he has touched 98 mph with his fastball. Opposite to Elijah Green, analysts believe his appeal is his floor as a future 4 or 5 starter rather than having a high ceiling.

After an outstanding 2022 campaign crushing 22 homers and hitting .355 against exceptional pitching in the SEC, Trey Lipscomb got some buzz. He led the power-house Tennessee offense in hits, home runs, and total bases. Lipscomb also led the SEC in extra-base hits and RBI.

Lipscomb is credited with a disciplined approach and the ability to make consistently hard contact to all fields. Although his playing time in college was in short supply, it was largely due to playing behind not one, but two future pros from 2019-21.

A two-sport athlete in high school, Brenner Cox is a Texas Longhorns signee for baseball, but reportedly had a pre-daft agreement with the Nationals.

Cox is a gifted athlete who brings power from the left side. He has an above average arm and was a “really good high school quarterback”. Texas special assistant Phillip Miller was excited for Brenner when he signed. “Anything Brenner does he makes it look easy, he’s another left-handed hitter with good power and might be the best runner in the class. We are really excited to see Brenner in Burnt Orange.”

Jared McKenzie was on everyone’s radars after his freshman and sophomore (technically a second-year freshman due to COVID), but has had some hiccups since.

In the Cape Cod League last summer, McKenzie hit .226 and struck out 36 times in 30 games. This season his struggles continued at Baylor before picking it up towards the end. Nationals Assistant GM and VP of Scouting Ops Kris Kline chalked up McKenzie’s woes to “draft-itis”.

He’s a pure hitter with an aggressive approach – MLB Pipeline awards him a 50-grade hit tool.

Ranked by Perfect Game as the No. 1 prep shortstop in Ontario, Ochoa Levya caught attention for his athletic ability and size. He’s a young player who has good tools including raw power. At the moment he doesn’t have a set position, but that will come with his development.

Riley Cornelio sits 93-95 mph and has touched 99 with a sinking fastball. He also has a 60-grade slider.

Coming out of high school Cornelio had first-round stuff, but instead went to TCU where he had a career 4.27 ERA and 90 strikeouts in 92.2 innings. He’s believed to have the potential to start because of a live arm and improving control.

Characterized as a real nice late-round pick, Huff didn’t have great numbers in college. He was at Vanderbilt in 2019 before transferring to Georgia Tech for the 2021 and ’22 seasons.

He tops out at 95 mph and has average off-speed.

Maxwell Romero Jr. is another Nats draftee who transferred from Vanderbilt to an ACC school.

Romero Jr. has proved himself as a power hitting backstop after slugging .507 in 2022 at Miami and .495 in the Cape Cod league last summer. He has a big, strong build, but is nimble behind the plate and has a strong arm.

He’s credited as a hard worker who has quick hands and the ability to play three positions.

Luke Young is a mid to upper 90’s righty with high projectability. He has a high spin rate fastball and has shown a lot of maturity in the last year according to his head coach, Hector Rodriguez.

He had agreed to transfer to Oklahoma State after two years at his Junior College, but is taking the opportunity presented by the Nationals.

Son of 17-year big leaguer and former Expo Marquis Grissom, Grissom Jr. was limited due to injury in 2021 and had an up and down season in 2022.

As a rising Junior, Grissom Jr. is a candidate to go back to Georgia Tech and try to raise his draft stock for next year.

The Nationals secured the left side of Tennessee’s infield with this pick (See: third round pick) and he might be a steal this late.

Kyle Luckham is considered a candidate to return to college, but if he signs the Nationals got a workhorse.

Although he gives up a lot of hits, Luckham was Arizona State’s most effective starting pitcher and demonstrated the ability to go deep into games.

He is 6’1″ 175 pounds with a lot of room to grow. I assume he will honor his college commitment.

This 5′ 7″ outfielder hit .345 with a 1.052 OPS this season. He’s currently playing in the Prospect League (summer league) and hasn’t missed a beat.

Last, but not least, is JeanPierre Ortiz. An FIU commit who’s been gunned at 97 across the diamond. He’s very athletic and is expected to continue as a two-way player. With a lot of room to fill out, expect him to honor his college commitment.

This entry was posted in Draft, Prospects. Bookmark the permalink.
← Previous Article | Next Article →