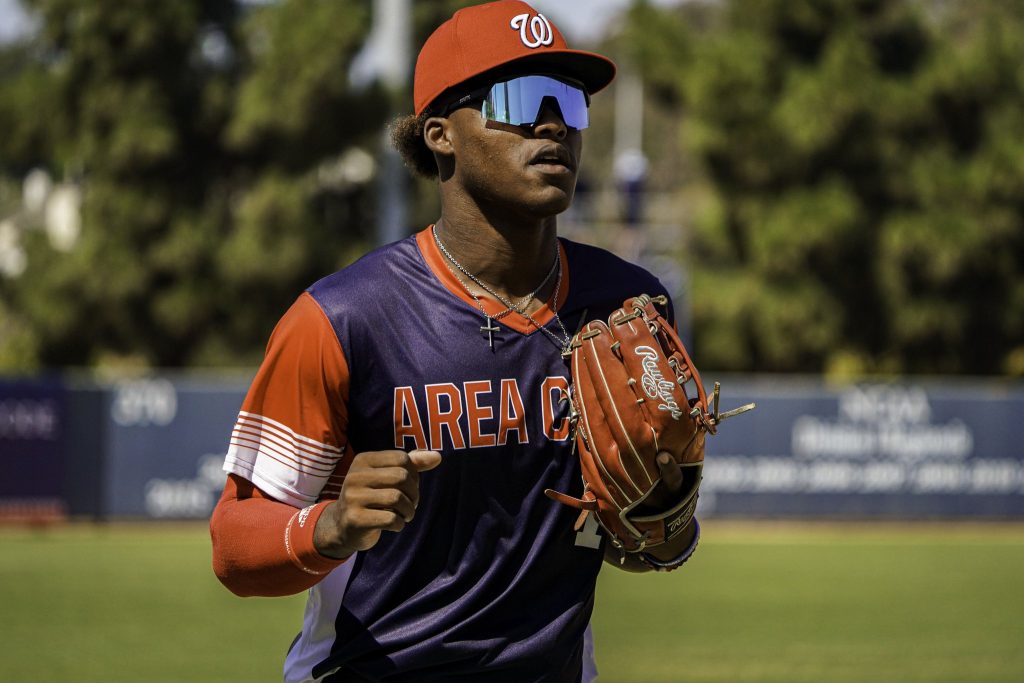 Coming off one of the worst seasons in the last decade, the Washington Nationals possessed a top five pick in this 2022 MLB Draft. There were numerous players whom the Nats were mentioned in rumors, but, ultimately, they decided on Elijah Green.

Not to be overshadowed, the second-round pick for the Nationals addressed yet another weakness: left-handed pitcher. Both of these picks kick off days of hope, promise, and future riches for the Nationals if the player development meets the potential.

Although the Nationals have quite a litany of needs — something made very clear thus far in 2022 — they chose to bring in a player with arguably the highest upside in the class even though he was a high schooler and all of the college players were still on the board at the time.

Ranked as the №3 overall prospect by MLB.com, Green has a powerful frame, already 6’3, 225 lbs before his 19th birthday. He shares his incredible stature and athleticism with his father, Eric Green. The elder Green was drafted by the Pittsburgh Steelers №21 overall in 1990 in the first round of the NFL draft. It makes both Greens the first father/son duo to be drafted in the first rounds of the NFL and MLB drafts per MLB.com.

The Nationals had long been linked to Kevin Parada, a catcher from Georgia Tech.  Considering Mike Rizzo’s track record of selecting college players, this move seemed relatively predictable to some. With all due respect to Parada, he likely was not the right fit for the Nationals for a variety of reasons.

Nonetheless, the draft board truly began to favor the Nats from the start. The Rangers shook up many expectations when they chose a wildcard in Kumar Rocker with the third pick. This move meant that one of the highly touted remaining top high school bats, Temarr Johnson or Green, would be available to the Nats if they wanted one of them — and clearly Rizzo did. After Johnson was taken by the Pirates shortly thereafter, there was an obvious path for the Nationals to Green.

As a player, Green is nothing short of incredible. Obviously, to get drafted #5, a certain level of talent must be demonstrated. However, Green was a different athlete in the prep ranks. As a senior, he simply raked against the best of the best as IMG Academy plays a notoriously competitive schedule. Green put all five of his tools on full display in Florida by batting .462 with a 1.592 OPS. These numbers are mind numbing by themselves, but the physical tools he put on display backed up these numbers and then some. Scouts graded him very highly at the plate.

Athletically, it becomes clear that he is the son of a professional athlete as he has 70 grade speed and 60 fielding. At the plate, his lowest grade is his contact ability, sitting at 50 due to that 20 percent K rate. However, his power more than makes up for it as it projects to be above average with the ability to become elite.

His MLB slot value will instantly make him a very wealthy young man at $6.49 million. Green, grew up with the comforts of being able to pay for top private lessons and attend the best schools as a son of an NFL star player, and now he can make his own dreams come true.

“Just the [track record] of the [Nationals] having prospects like Bryce Harper, Trea Turner, Juan Soto,” Green said via the ZOOM call. “It just shows that they know what they’re doing with their players. I just feel like I can be one of those players that makes it to MLB soon.”

Green says he is already friends with Brady House and T.J. White who are Single-A top prospects with the Fredericksburg Nationals. In the cover photo, Green is with White on a travel team. Our research also showed that Green was high school teammates with Jayson Werth‘s son Jackson, at the IMG Academy.  So there are several tie-ins already to the Nats system.

“Will need development of course, but has the best overall tools in this draft — easy. Got the pro pedigree with his dad, and he is a great kid!!! I mean great kid!!!!” — a former teammates’ family messaged to TalkNats about Green.

In terms of the potential for Green, many see him as a future All Star. His physical tools combined with his natural abilities make him a surefire superstar if everything falls into place, and he compared himself to Mike Trout on a ZOOM call with the media tonight. The biggest question for Green is in his development.

“Elijah has a chance to be a five-tool package at the Major League level,” said Nationals assistant general manager and vice president of scouting operations Kris Kline. “When I say five tools, I mean five above-average tools at the big league level.”

If he is able to improve his contact skills, he might be the next great Nationals outfielder. Even though Juan Soto’s future in DC has recently been thrown up in the air, Green is a player that many fans can be excited about, whether or not he shares the field with Soto.

The Nationals addressed yet another weakness within their organization with the selection of Bennett with their second round pick at №45 overall. This pick also holds a large amount of familiarity for the organization as he was high school and college teammates with Nats’ top pitching prospect Cade Cavalli. In addition, Bennett was drafted by the Nationals in 2019 in the 39th round and went the college route. As the Nationals attempt to rebuild their pitching rotation, they will hope to find a dynamic lefty arm. Bennett might not be the flame throwing lefty that some qualify as “dynamic”, but he is an absolute workhorse who can eat innings at will, and collect outs in bunches.

“His fastball is up to 96 [mph], he’ll live at about 93, good life down the zone,” Kline said. “Changeup is his calling card. He’s got an average-to-solid-average Major League slider that he needs to continue to develop. There are times when it’s really good, but he needs to learn how to commit to each one.”

The Nationals have doubled down on their stance of drafting incredible athletes. Bennett stands at 6’6, 234 lbs, but is very nimble and agile for someone of his size. His delivery is smooth, and mechanics are repeatable. Most recently, Bennett pitched the Oklahoma Sooners to the College World Series.

Bennett, unlike Cavalli, is a pure pitcher. He commands the zone and does so with consistency. Scouts have marveled at his ability to locate all of his pitches. Speaking of his pitches, he has an arsenal containing only three pitches. His fastball sits in the low to mid 90s but can reach 98 at times. His changeup is the output for Bennett, and it is one of the best in the draft. The velocity difference between his changeup and his fastball creates a deadly combo that victimizes right-handed hitters. His slider, though, might need a bit of refinement. It lacks true consistency but can be a weapon against lefties.

With just two picks in the opening night of the MLB Draft, the Nationals attempted to find dynamic athletes. These are players who could become game changers once they arrive at the big leagues. As the team continues the rebuild, the draft is the biggest opportunity for them to add talent to a farm system that is in the process of replenishment. Between Green and Bennett, there are a lot of things for Nats fans to admire. Additionally, there are certain things that are red flags and concerns with both picks. In any case, sometimes the riskier picks have a way of panning out, something the Nats are looking to come to fruition.

Insider who has seen Elijah Green's BP said it is a show. The power is there and he eats meatballs. Speed off the charts. Glove and arm are 'plus' but hit tool needs the reps and pitch recognition. That's what the minor leagues are for. https://t.co/HOOlv0zH7P

This entry was posted in Analysis, Breaking, Draft, MikeRizzo. Bookmark the permalink.
← Previous Article | Next Article →