A mixed bag with the top prospects 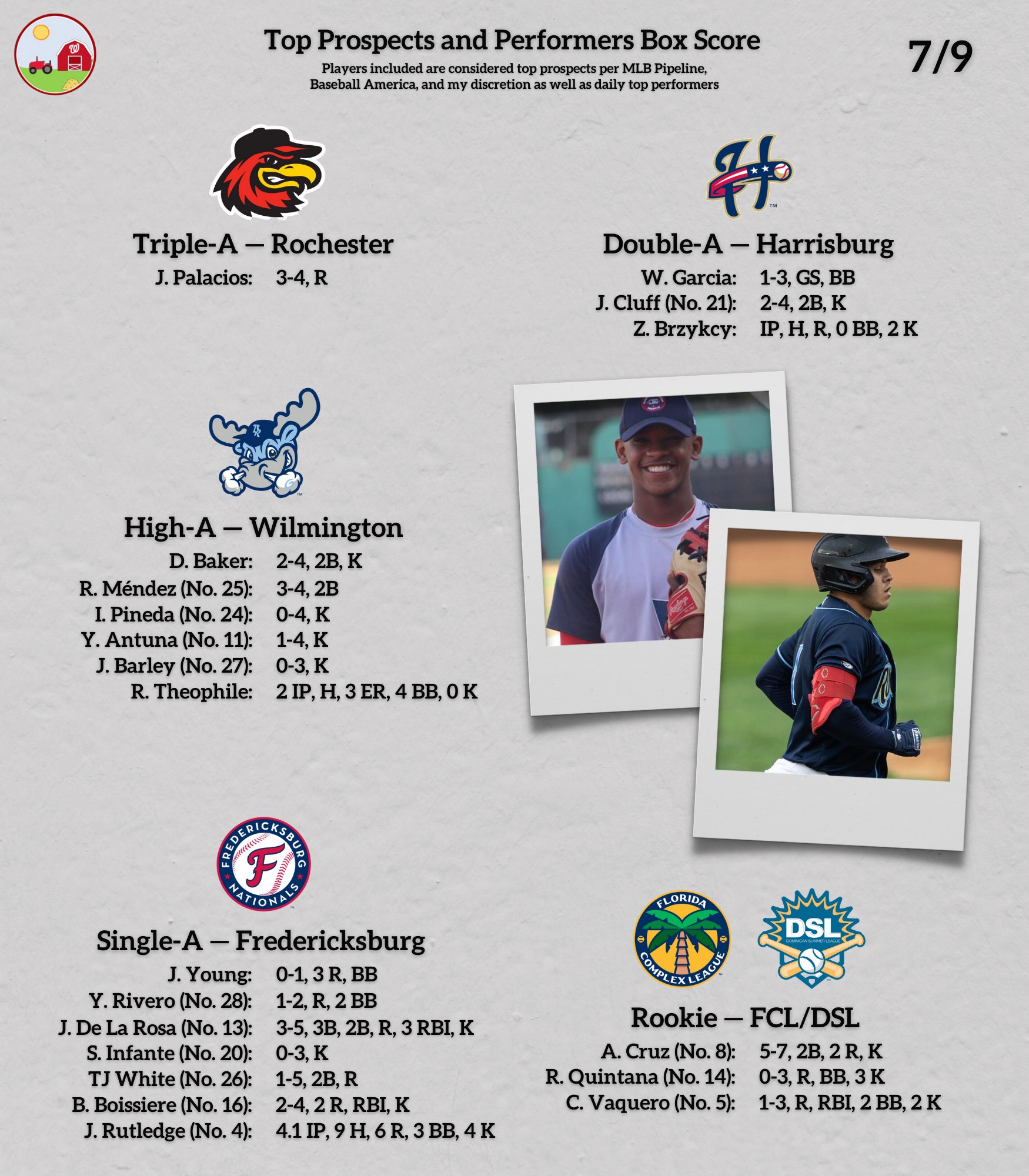 Do you want the good news or the bad news first? Let’s just say it was a mixed bag Saturday.

We can start with the good news. In the Florida Complex League, the young Nats had a doubleheader, and Armando Cruz just dominated with 5 hits with a double, raising his batting average to .318.

At a level above Cruz, Jeremy De La Rosa who should have been an All-Star Futures game representative for the Washington Nationals and was not chosen, went off with the bat again last night and finished a home run shy of a cycle for the FredNats. He is batting .314 with an .887 OPS.

The Nats choice for the All-Star Futures game was Darren Baker who is at High-A Wilmington.  He was the lone shining light for his team last night going 2-4 and raising his batting average to .269 with a .683 OPS. Unfortunately,, Wilmington was shutout 5-0.

The Senators won 5-2 after a great 8.0 inning gem from Franklyn Kilome who fanned 8 batters with no walks and only one run.

At Rochester Triple-A,  Josh Palacios had a big night going 3-4 for his team.

Now for the bad news, Jackson Rutledge is pitching several levels below where he should be. He is still at Single-A Fredericksburg,  and went 4 1/3 innings giving up 6 runs on 9 hits and 3 walks.

At High-A Wilmington, it was another tough night for Rodney Theophile who gave up 1 hit over his 2 innings, but he gave up 3 walks and 3 runs in another short outing. Theophile was promoted last month based on an amazing opening to his season at Fredericksburg.

Sterling Sharp had a golden opportunity this year to show he was MLB ready and he gave up 5 runs last night in a 9-1 Red Wings loss. Sharp’s ERA now sits at 6.00. Luis Avilan also had a rough night in relief.  Besides Palacios,  you’d have to look hard for positives in this game.

We will leave you with some good news. Even though Rutledge struggled, the FredNats put up a 4 spot in the 8th inning to win it 10-6 after the bullpen threw 4 2/3 scoreless. That FredNats team so often finds a way to win.