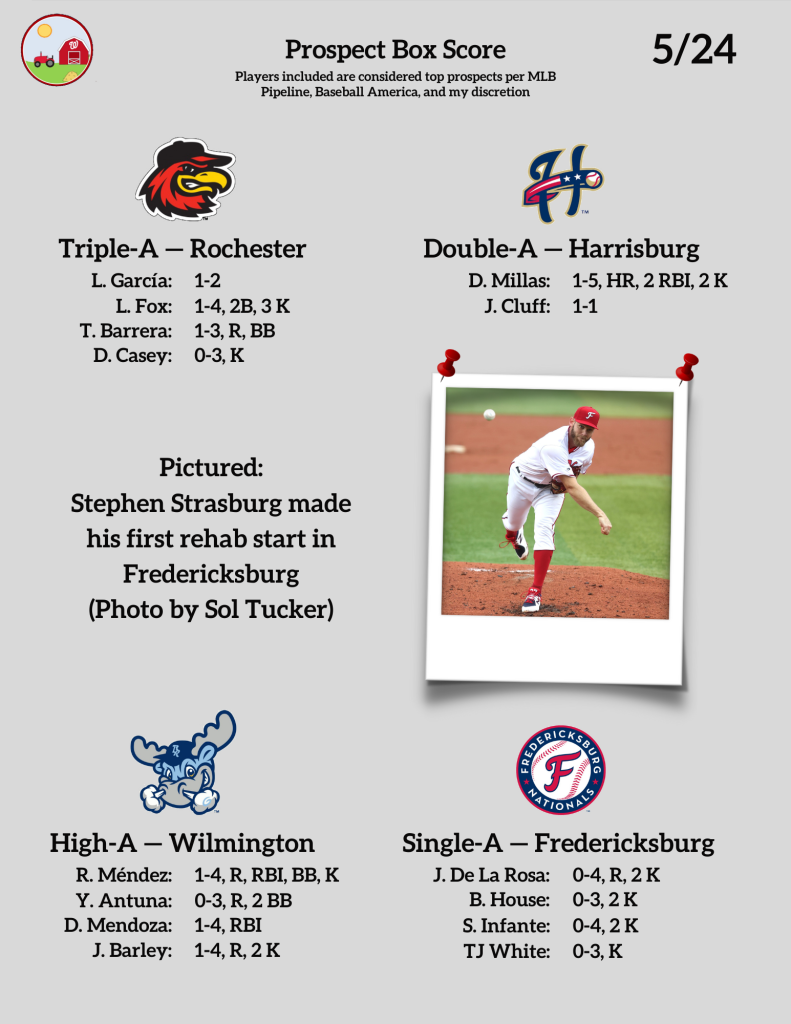 There were three rehab starts across the system – Stephen Strasburg started the game in Single-A Fredericksburg, Joe Ross started for Double-A Harrisburg, and Ehire Adrianza played shortstop in the same game.

It was a rough day all around for a highly anticipated Stephen Strasburg rehab start. He failed to reach three innings before reaching his 60 pitch count and allowed three runs on three hits, four walks, and three punch outs.

Regardless, it was nice to see Stras on the mound competing in a game that counts.

The offense only mustered one run on one hit, the run coming on an error.

After allowing eight unanswered runs to start the game, the Blue Rocks showed some fight with a four-run 3rd inning. Ricardo Mendes, Omar Meregildo, and Drew Mendoza all tallied RBIs in the inning.

In total they scored six runs on seven hits. The pitching side didn’t leave much to write home about.

Joe Ross and Ehire Adrianza were phenomenal in their rehab starts. Ross went three innings of shutout ball with only two hits allowed and four strikeouts. Adrianza went 3-3 with a double and a walk before he was pulled.

A pair of two-run homers from Drew Millas and Mitch Longo put the Sens up early, but they couldn’t get anything going after that. Matt Gorski hit one of the farthest home runs I’ve ever seen to take the lead in the 5th and that would be it.

The Red Wings managed to pull out the win with a four-run 3rd innings, but at what cost? Luis García was taken out of the game after he collided with the first baseman and was visibly shaken up.

The Nationals will earn an extra year of control on García tomorrow and many believed he would finally get the call up, but that will have to wait.

The pitching was rocky, but Wings win 5-4.

The Nats’ minor league system had another poor night despite three rehab starts.

Looking forward to seeing what they do with the rehabbing big leaguers.