Brady House is Back for Friday’s MiLB Recap 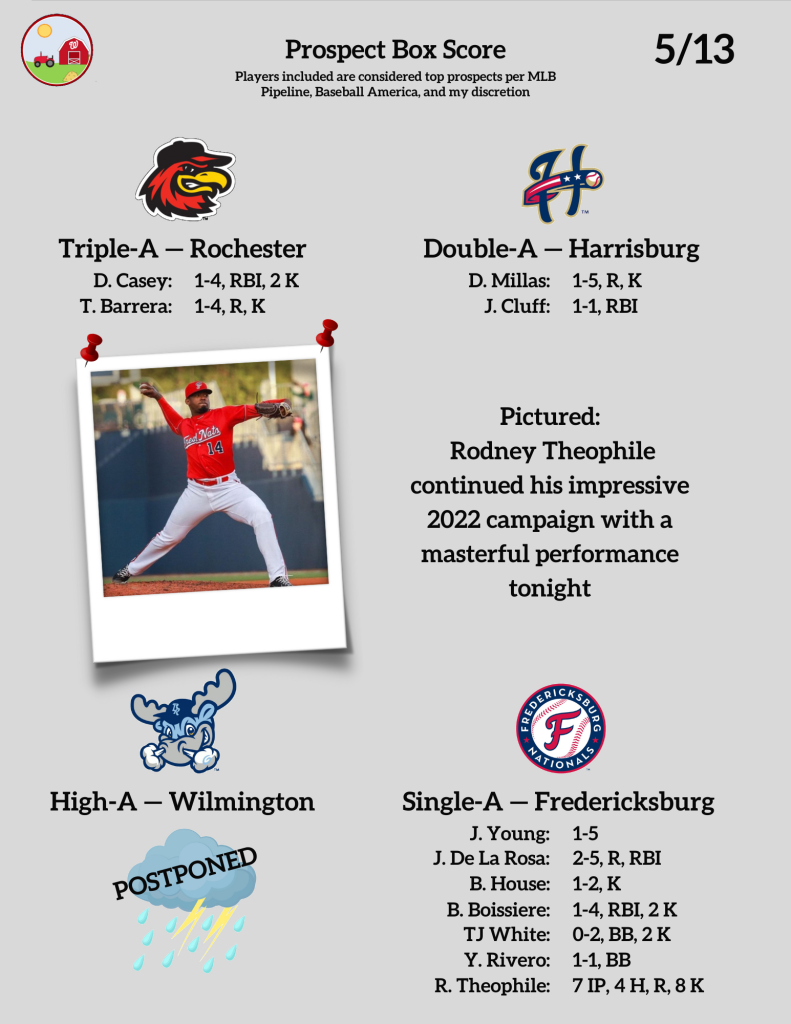 Wilmington’s game was postponed again tonight due to poor weather.

The rest of the farm played as scheduled.

Brady House made his return from an undisclosed injury, but left the game early following a strikeout.

Rodney Theophile spun another gem tonight and his ERA is down to 0.82 for the season. He went seven innings of zero earned run ball (one unearned) while striking out eight and scattering four hits with zero walks.

Unfortunately, the bullpen gave up four runs immediately after Theophile’s departure, putting the FredNats back four runs in the 8th inning.

The offense mustered six hits and Brady House exited the game after his at-bat in the bottom of the 5th inning.

The FredNats defense also managed to make three errors, a common theme for the Fredericksburg  defense. An underwhelming game to say the least.

A bright spot; Jeremy De La Rosa raised his batting average to .325 after his fifth two-hit game in his last eight games.

The Blue Rocks game against the Cyclones was postponed due to foggy weather. There is no makeup currently scheduled.

The Sens played the Flying Squirrels close despite going down 3-0 early in the game.

Following homers from K.J. Harrison and Justin Connell, a Jackson Cluff single in the 8th inning tied it at 5-5 and the game would go to extra innings.

Harrisburg couldn’t get it done in extras once again as they lose 6-5 in 10 innings.

The offense had 14 hits thanks to multi-hit games from Jecksson Flores, Dondrei Hubbard, and Connell.

Rochester keeps rolling as they won their SEVENTH game in a row. I feel like a broken record!

Once again the Red Wings stater had a below-average start, but the offense and bullpen picked them up.

They scored six runs on eight hits including two from Matt Lipka and an RBI-double from Taylor Gushue. The offense struck out a combined twelve times, but managed to make it work.

The Red Wings are playing first-place baseball as of late. Tonight they won 6-4.

Despite a long awaited Brady House comeback, the Nats’ minor league system had a slow night.