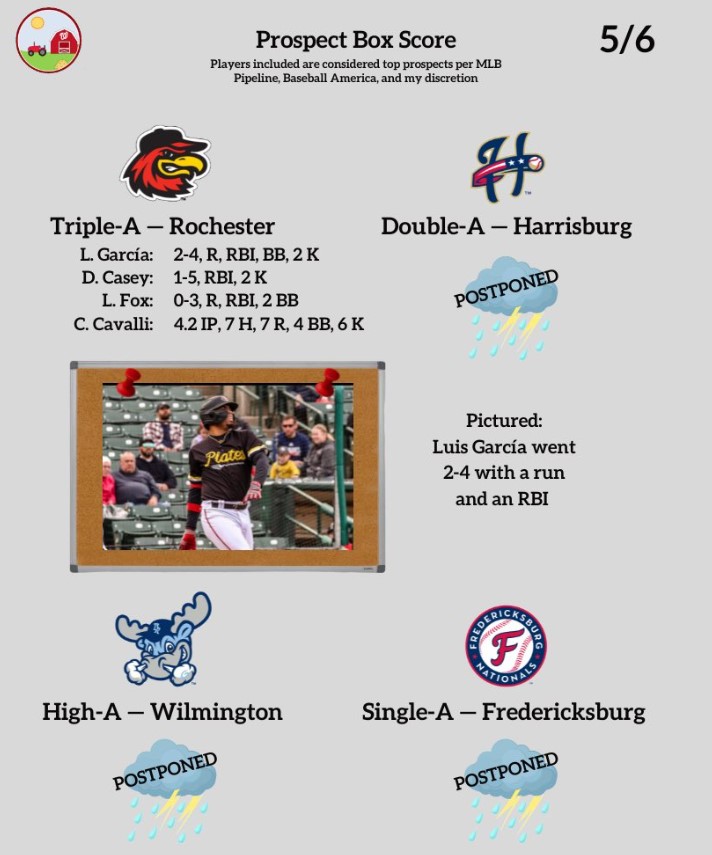 It was a rainy day on the east coast. Three of the four affiliates had their game rained out.

The only team to play was the Red Wings, who had, top prospect, Cade Cavalli on the mound.

The FredNats’ game was postponed due to rain and will be played on an unannounced date.

The Blue Rocks’ game against the Hot Rods was postponed due to rain and will be played on Saturday, the 7th.

The Senators’ game against the Bowie Baysox was postponed due to rain and will be played on Saturday, the 7th.

Cade Cavalli had another rough outing tonight against the RailRiders. He continued to fall behind hitters and this time it resulted in seven earned runs. He’s a top prospect for a reason and his stuff is still elite, there’s no reason to worry.

The offense did a good job responding the the damage, scoring five of their own by the fourth and tacking on one more in the fifth. Rochester tied it 7-7 and couldn’t score with bases loaded in extra inning to lose it 8-7.

The wind was blowing in this game, and there was not a lot to takeaway from this one except the Red Wings bullpen was good after a tough night with Cavalli. While Luis Garcia had two singles, one got under an infielder’s glove and another squibbed by the pitcher for an infield single. Let’s just say he is living right.

The Nats’ minor league system basically had a night off.