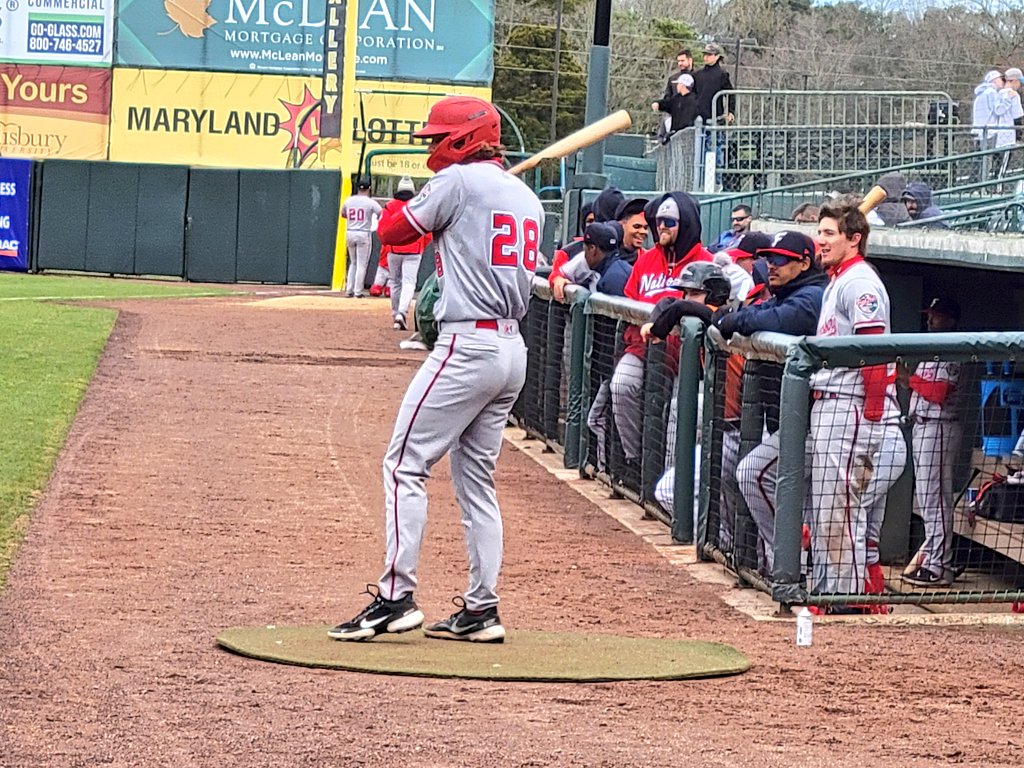 Unlike most of you, I am a Nationals fan who graduated from years of Expos loyalty. And perhaps for that reason, I am not as demoralized and crushed by the poor prognosis of the season and its early failures. For many years I endured bad Expos teams, and my loyalty was eventually rewarded in part, but then the yearly disappointments of coming close and fading, then watching the team lose a procession of players with ripening free agency to other locations where they would star.

Lost in this, however, and perhaps forgotten to all in the Nationals organization save Bobby Henley, Dave Jauss, Dave Martinez and perhaps a few others, was the Expos tradition of regularly churning out high grade position-player talent from below that sometimes blossomed and well-replaced departed stars. Indeed there were the players who weren’t ever replaced, like Gary Carter. But then there were players who plugged into openings like Andres Galarraga, Larry Walker, and then Vladimir Guerrero. I remember the excitement of so many new careers blossoming, from Steve Rogers to Bryn Smith to Mel Rojas and others. This began my intrigue for the next generation that has stayed with me since.

There were many things to remember from the 2021 disappointment, even the positives of the mid-season surge to the top of the NL East on the back of Kyle Schwarber’s historic hot streak. Like all history, however, some of the most impactful circumstances become clearer only downstream. For me, the bell on a massive organizational retooling began ringing loudly with the embarrassing futility of the FredNats start, in which they remained winless through their first fifteen games. Coinciding with that historic losing streak was a less publicized awful start for Wilmington in High A, and in particular dreadful early season work for its heralded star prospects Yasel Antuna and Israel Pineda (long ago left behind by international classmate Luis Garcia). These basement-level performances, along with most underwhelming displays from the upper level prospects as well (think Tim Cate, Cole Freeman and others), had to have raised a five-alarm fire for how the organization needed a full flushing, lest the fire consume Mike Rizzo and his lieutenants.

It’s been interesting watching the Nationals behind-the-scenes off-season moves in this regard. I was very wrong in expecting a Rizzo flash, and I’ve supported him and continue to do so. It was fascinating to see his relative strength kept in the garage. As we have all discussed, the organization has had too many bad drafts, too few position players developed, and has risen on its player acquisition at the major and upper minor league level. Most of Rizzo’s trades have worked out well. More have been uneven returns for the Nationals rather than the reverse. But instead this winter we got waiver claims and minor league drafts. Along with that, however, we did get a massive internal organizational transformation in the player development system.

With that, 2022 has begun, and with many team needs unmet and other pieces yet to unveil. Stephen Strasburg appears to be ahead of schedule, and due to return in May to a team desperate for starting pitching. Joe Ross could be done before he ever started, with the parting gift of sunk cost like the deferred salary Brad Hand receives. Will Harris will not be the late inning dessert he was intended to be when acquired for 2020. Down came the Scherzer billboard like the end of Cinema Paradiso, as the Nationals continue to pay the highest paid player in the history of the game 15 million now and for the next several years to pay off the remainder of his well-earned $210 million from the Nats. Ah, the cost of a Curly W at Cooperstown.

But you all know me to be a relentlessly positive baseball fan, and that is because my humble Expos beginnings never spoiled me. Try it sometime. I am not delusional, but seeing a far more promising start to the season below and the coming boys of summer. Let’s make the Nationals the Expos again!

The Nationals may be a last place team. They may be an undertalented major league team. But this organization is far from hopeless and the story is yet to be written for 2022 — and I am watching eagerly. At the major league level, the enormous turnover includes early promising returns at catcher with Keibert Ruiz and a good start from Josh Bell (as opposed to last year), Juan Soto holding his own, and the team actually scored a run to tie a game in the late innings yesterday on a bunt – who knew a Nationals team could play that way? Who knew Sean Doolittle could get five swinging strikes in one inning on a pitch everyone knows is coming (just coming in harder than it has in a couple of years)? Maybe Fedde has something, Adon may yet have something, as may Josiah Gray, even if Patrick Corbin has yet to restore confidence. To the organization’s credit, they are accepting a bad start rather than rushing talent to plug gaps, with the notable exception of Adon over Rogers.

The team started 1-5 last year and made it to first place. There are ingredients that we have yet to see hit their stride. And indeed there are players down below who may push themselves up before long. What is it that we will see from the organizational retool? Whom will we see take the big leaps forward? Who is at AAA that we will see contributing this year? Who is at AA that will make the double leaps by year’s end? It’s too early to tell, but that script is far from written and face it, there is nothing at the major leagues, save the catching position, preventing the upward push I remember fondly from the Expos.

Forget the pundit rankings – the full season minor leagues are full of new talent brought over in trades and in the 2020 and 2021 drafts. These players have yet to be fully accounted for. Others like Drew Mendoza, Andry Arias, Daniel Marte, and Matt Cronin and numerous others are hoping to take their games to another level, with the right approach – perhaps the approach of the new coaches and teachers. Others like Jake Irvin, Mason Denaburg and Holden Powell, just waiting to be healthy. International signees remain gently promoted. Assignments on opening day reflect that the team is putting the onus on the players to show they are ready to get to that next level, be it Luis Garcia or Israel Pineda (who ended last year strong but returned to A+).

Rochester has started – well, interesting. When was the last time we could say that before? And the best part is, the pitching has been particularly interesting. Sure, we’re all on a Tyler Clippard watch, and he’s looked ready for a return. But Jefry Rodriguez, the long forgotten eight starter in organizational depth, came back from Cleveland and started 2022 with a pop for an organization that has just seen Anibal Sanchez evaporate. Francisco Perez was a pitcher on the rise the Nationals nabbed from Cleveland; while he did not get untracked in Florida, he’s started out the regular season with more than two strikeouts an inning in three games. Erasmo Ramirez was the other guy at the tryout for Anibal Sanchez, but he’s the one who’s showed out in three games this far. And two other pickups from roster shakeouts, Jace Fry and Hunter Harvey, have started well, as has Sam Clay (last seen getting on-the-job training in DC in 2021). So there are plenty of potential next men up – even as the Nationals enter the week with no blown saves, Tanner Rainey and Sean Doolittle and Kyle Finnegan throwing strikes.

As for the position side of things, Luis Garcia has had a rough start defensively, but the bat is alive if the glove can season. Donovan Casey is finally hitting, and after starting the season striking out at an alarming rate, showed better contact the rest of the weekend. Nick Banks is lurking around the discussion with a good start; Tres Barrera has had a good bat but had a rough night of stolen bases that  throws a bit of shade on him. Still, lots to watch at Rochester right now.

Harrisburg is likewise intriguing and playing well. Cole Henry’s scoreless start yesterday was a welcome entrée to the next stage of his carefully managed ascent. Minor league draftee Matt Brill has been closing, even with Matt Cronin in the house, but Cronin keeps putting the numbers up. The position players are familiar OG, but with new mentorship, let’s see whether they discover more.

Wilmington has two interesting plot lines – numerous players trying to get noticed at upper levels after underachieving for too long (Mendoza, Antuna, Irvin (injury), Pineda, Cody Wilson, Jordy Barley) and a group of relative youngsters who are getting thrown into A+ because they’ve obviously impressed with their maturity and skills (Darren Baker, Michael Cuevas). The team started well this weekend, and players like Antuna have already flashed the hope that 2022 is a different story, as have others who are clearly on the radar (Mitchell Parker, Zach Brzycky).

And then, perhaps the happiest harbinger of all. Fredericksburg is 2-1, a most unfamiliar place of being a winning team and surpassing their win total from 2021 fifteen games early (they were 1-17). But most importantly, a team of intriguing an new faces. Brady House is obviously the great hope – but make room for Yoander Rivero, a little guy who elbowed his way into the conversation last year and is getting starts at SS. Make room for TJ White, who carried whispers of his great spring into Low A as an underaged prospect. Jacob Young was persuaded to leave the Gators after the 2021 draft and did not inspire enthusiasm in his debut. And he may be at low A again, but he sure is a live wire, with three triples over the weekend and the batting eye that earned him respect in the SEC. Sammy Infante isn’t ready to accept being outshined at age 20, and made it to full season and now, showing excellent patience at the plate. Jeremy DeLaRosa is starting well in his age 20 season as well. Then there is the pitching. Andry Lara debuted beautifully on Sunday, as did Karlo Seijas and Bryan Pena, looking like the pitchers the organization has envisioned. And finally my sentimental favorite, Rodney Theophile, the unknown Nicaraguan with the big arm who leaped the DSL to underwhelming results. Well, on Friday he had eight K’s in four scoreless. Which is to say, sometimes, they do grow up the way we hope they do.

Back in the day of Valderi, Valdera, we used to call them, Nos Amours. We loved them while they were growing up, though the losses did come. Cheer up folks, and stick together in the foxhole. It’s going to be a fun year.