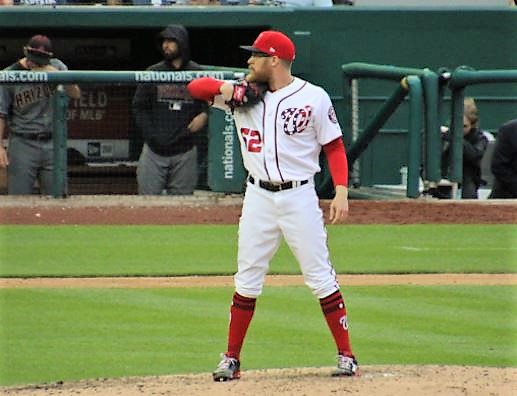 For as long as the Washington Nationals have been around, the single Achilles Heel that has continued to rear its head, has been the bullpen. Rarely have the Nats been able to assemble an arm barn that is capable of consistently holding leads late in games. In 2022, the assumption is that the trend could continue. That does not mean that there are no pieces to look out for in the relief corps. With both veteran and youthful options aplenty, the Nats will be able to give numerous players an opportunity to prove they, like many others in the organization, are a part of the long-term plans.

The Nationals, for better or worse, really do not have a solidified closer. After dealing Daniel Hudson and Brad Hand at the Trade Deadline in 2021, manager Dave Martinez relied on Kyle Finnegan to serve as the stand-in closer. He pitched admirably in the role, but not well enough to cement himself as the future of that role. The front office likely hopes to see someone like Mason Thompson or Tanner Rainey ascend to that role due to their awe-inspiring velocity and wipe-out breaking pitches.

Rainey will be a particular pitcher of note as he, like Victor Robles, ended the season in Rochester. Rainey is, actually, in a very similar situation as Robles. He played very well in 2019, but has struggled to sustain that production in the years following. Thompson pitched at the MLB level for the entirety of his time in Washington since his arrival. Thompson flashed some great stuff, but consistency evaded him at times. He has the ceiling to be a high level closer for the Nats. That potential will become more clear as to if that is a reality in the coming years.

Some older pitchers that are looking to make their mark for the Nationals this season include Steve Cishek, Will Harris and Sean Doolittle. Cishek, the ageless submarining pitcher, has been able to sustain his production over the latter years of his career. There is a strong likelihood that he can be someone the Nats can flip in July. Harris signed with the Nats after the 2019 season. The Nats gave him a three year contract. He has not thrown more than 25 innings in the first two of the deal due to his Thoracic Outlet surgery. The Nats hope to get the most out of him in the final year of his contract. If that happens, he can be another player the Nats attempt to flip at the Trade Deadline. Finally, there is Sean Doolittle, the fan favorite lefty who has returned for a second tenure in DC. He has seen a significant drop off in his production since his glory days in the Curly W. Nonetheless, he should be able to provide some innings. This morning, the Nats added an old favorite, Tyler Clippard, to the mix as a reliever on a minor league contract.

A cool Tyler Clippard fact (h/t @PowerBoater69), Clip has the highest reliever WAR in #Nats history. His @Fangraphs WAR is +6.1 in a Nats uni and ahead of Craig Stammen (+5.3) and Drew Storen (+4.5). Overall, Clippard ranks 21st as the most valuable Nats player in terms of WAR. pic.twitter.com/yFIqRSnEG0

There are some younger options in the Nationals organization, though. Gabe Klobosits was not a terrible option for the Nats when they desperately needed people to eat innings.  Similarly, Andres Machado was a pleasant surprise given the low expectations for him. Matt Cronin, though, is the very highly coveted reliever that has shredded the minors, likely making his MLB debut in 2022. The lefty from Arkansas has a lot of life on his fastball and induces weak contact regularly.

Regardless of who enters the game for the Nats when the bullpen door swings open, there are no sure things. The organization is relying on pitchers to either return to form or to round into form. That has the potential to be a dangerous gamble. However, there are a lot of long term benefits that can result. This makes it the biggest reason for the Nats to pursue this option. The Nationals have thrown darts at a board to see what sticks, but the results are yet to be determined.