The Maryland Terps baseball team is ranked while bashing HRs and sporting a trio of aces. Georgetown games this weekend! 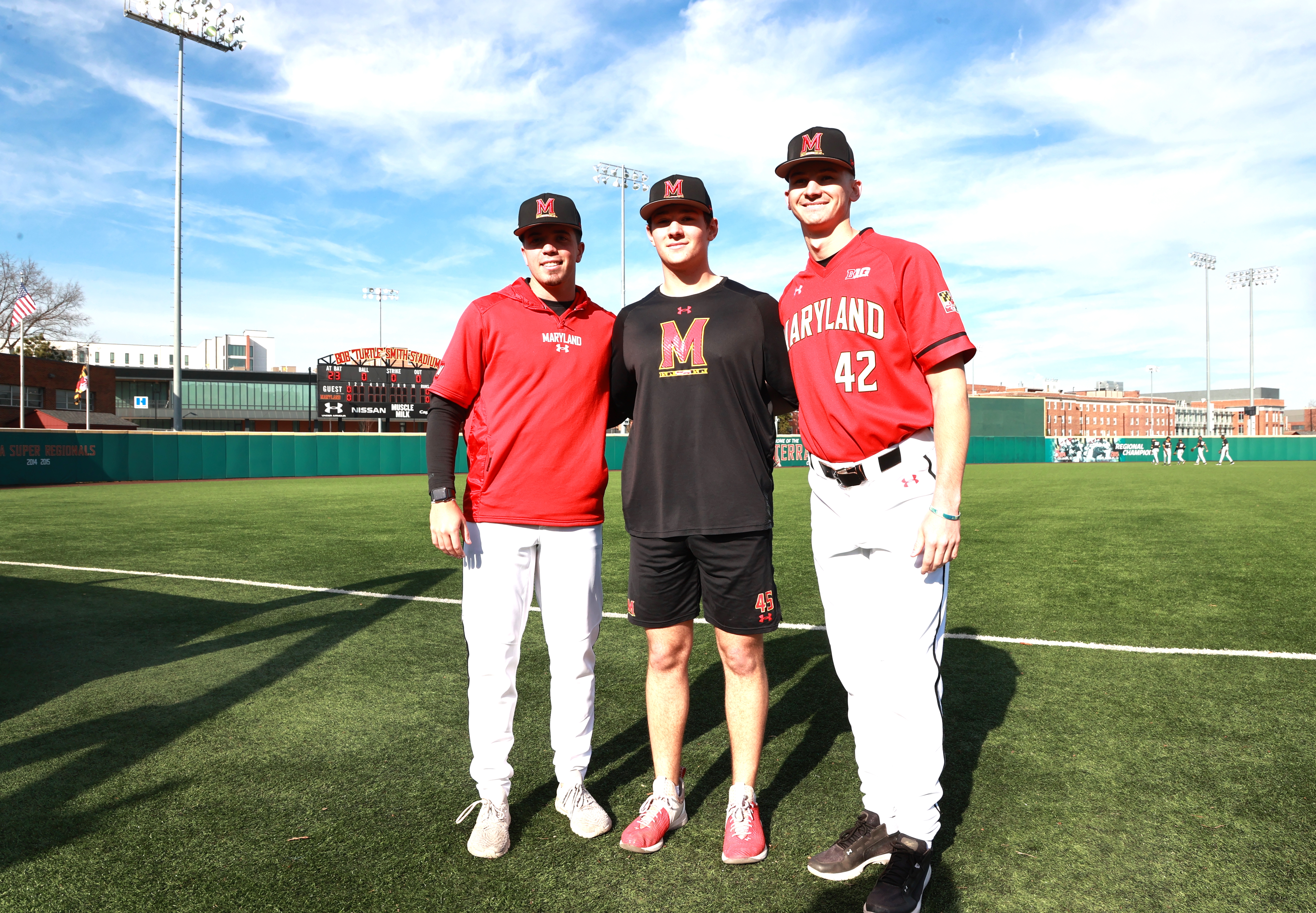 With no MLB baseball games in Spring Training coming for another week, D.C. area baseball fans will be treated to some exciting weekend baseball with a game at 4pm today and again on Sunday between the nationally ranked Maryland Terrapins and the Georgetown Hoyas. More on that below.

After Terps’ ace Sean Burke was drafted in the third round by the White Sox last summer, Maryland head coach Rob Vaughn and new pitching coach Mike Morrison had to put together a new pitching staff for the 2022 season. Nick Dean, a junior, was named to the coveted Friday night starter role, Ryan Ramsey was converted from the bullpen to the Saturday starter, and last year’s Top-100 college prospect, Jason Savacool, took the Sunday starter’s spot.

Coach Vaughn is finding many wins are going the way of Earl Weaver who said, “The key to winning baseball games is pitching, fundamentals, and three-run homers.”

The team’s Big-3 starters are led by Dean who throws a 4-pitch mix with a nasty “Bugs Bunny” changeup as Morrison described it. His ERA is an impressive 0.93 with a scant 0.83 WHIP. If he can keep that consistent arm slot with effective pitch tunneling, Dean could jump up prospect charts.

Morrison has pro experience with the White Sox organization, and was hired by Maryland in June of 2021 for the pitching coach spot. He understands the college game, which works very differently from a minor league team. You need your weekend starters, and mid-week arms to get you through each week. You work the analytics with those who want it and understand it. A lot of the approach is old-school pitching because college teams just don’t have the advanced scouting which just allows you to throw your best stuff. But continual improvement is a goal with Maryland Baseball.

“You have to coach ever player differently because no two players are the same,” Morrison told us. “I would take Dean, Ramsey and Savacool against any team out there — those guys have to be one of the best trios in the country! I am glad I get to go to war with those guys once a week. They are an absolute pleasure to coach.”

The Terps Big-3 pitchers of Dean, Ramsey, and Savacool have a stingy 2.67 combined ERA.  The team’s fourth starter, Logan Ott, is also a reserve outfielder. He has an MLB bloodline as his great-uncle Ed Ott was the Pittsburgh Pirates catcher in that 1979 season when they won the World Series, and Ott batted .333 in the Fall Classic to earn that ring. The Ott family lives in Montoursville which is also the home of Mike Mussina who coached Ott. Expect improvement from the lefty as the season progresses.

Many of these Terps, have multiple roles like Nick Lorusso who is an infielder and also used as a late inning reliever. There are many players with positional flexibility on this team. Because the team has been missing closer David Falco this season due to an injury, the team has relied heavily on Will Glock and Sean Heine as their bullpen firemen, as Morrison likes to call them. Glock has a 0.00 ERA in his first inning of work this season, and he has some impressive stuff. Call him a fireman or a stopper, he came into the ninth inning to inherit runners on the corners with one out on Tuesday night to close out the win and not allow any runs to score.

After their early success, Morrison says he is more proud of how his starters have come out and have worked even harder.

“When you have guys like that it makes it really easy to coach them,” Morrison said.

The scouts love Savacool who has a 7:1 K/BB rate this season, and he has a 1.05 WHIP with the ability to pitch deep into games. Baseball America ranked him as the 12th best prospect in the college class of 2023. We have interviewed this young righty before, and will have future articles on him on our TalkTerrapins site.

On offense, the young Terps have bashed 17 homers this season as compared to seven given up to their opponents. Maxwell Costes has four dingers and a lofty 1.162 OPS to lead the team. Troy Schreffler Jr. is batting .400 on the season with a 1.071 OPS, and he is another watchlist player. There is plenty more good bats on this team, and coach Vaughn has his catcher, Luke Shliger batting lead-off. He was named a 2021 Big Ten All-Freshman Team player last year. Bubba Alleyne is another bopper on this team, and he cranked two tape-measure homers on Tuesday.

So far the Terps have also been playing good fundamental baseball and have had fewer errors than their opponents. The college regular season ends on May 21, and Maryland has their eyes on what they hope will be bigger and better things. First they have to battle through some tough opponents like a trip to Dallas Baptist at the end of this month before they really getting into their Big-10 schedule for most of April and May. This weekend has home/road games against Georgetown with Cornell sandwiched in for a Saturday afternoon contest.

The Hoyas compete with Maryland on recruiting DC local talent, and they have Andrew Williams as their Friday night starter for second-year head coach Edwin Thompson. The Hoyas play their home games in Bethesda, Maryland at Povich Field where they will play the Terps on Sunday with today’s game in College Park. The Hoyas’ Saturday starter is Nolan McCarthy, and they will most likely throw lefty Kyle Salley against the Terps on Sunday.

On offense, the Hoyas have three players who have been crushing the ball so far this season. Jake Hyde leads their team with a .480 batting average and a 1.316 OPS. Right behind him is Andrew Ciufo who is batting .421 and a 1.289 OPS and not far behind him is Adam Dapkewicz with his .353 BA and 1.024 OPS. While the Hoyas have not played the same level of competition as the Terps, they still have some good players on their squad.

For baseball fans, you should definitely take in games this weekend!