The trade that brought Drew Millas to the Nats could pay dividends! 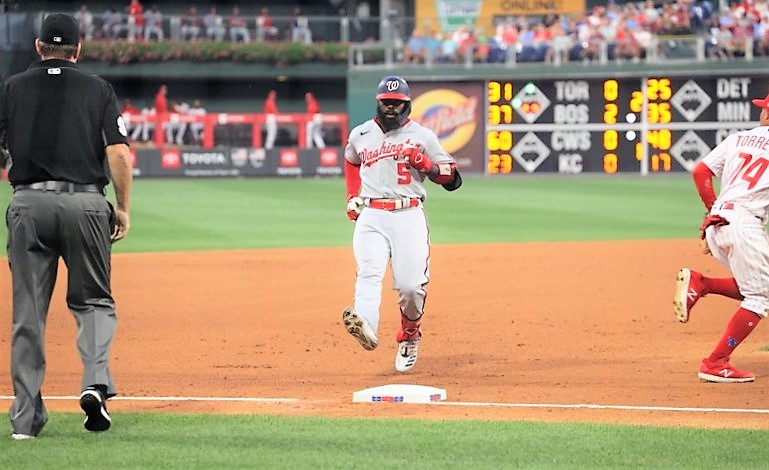 Josh Harrison was part of the Nats deadline trades in 2021; Photo by Sol Tucker for TalkNats

During the last week of July 2021, the Washington Nationals went through a franchise altering trade deadline that meant parting ways with Max Scherzer, Trea Turner, Kyle Schwarber, and five other key pieces of the team. Included in the trade deadline mayhem, was a deal that sent Yan Gomes and Josh Harrison to the Oakland Athletics in return for pitching prospects Seth Shuman and Richard Guasch, along with catcher Drew Millas.

All three of the prospects acquired for Gomes/Harrison entered the Nationals’ organization as top 30 prospects, according to MLB Pipeline. Shuman sits at № 29 but doesn’t get the love he deserves from the official pipeline rankings. Before coming to the Nats, he was flaunting a 2.25 ERA and 62 strikeouts in 56 innings at the High-A level. His four-pitch mix will carry him far and he’ll most likely be tested at higher levels in 2022. Guasch has seen a decrease in production since his outstanding 2018 season, however he still brings a promising repertoire to the table and does so from a 6’ 4” 205 lbs. frame. In 2021, he struck out 92 in only 74 innings, proving that he has swing and miss stuff – the goal for him this season needs to be limiting walks and keeping the ball on the ground.

With Millas, he is a switch-hitting catcher with an athletic build and a knack for getting on base. He comes in at No. 20 in the Nationals’ pipeline and is often ranked near Tres Barrera when talking about the catcher depth chart. Taken in the 7th round of the 2019 draft out of Missouri State University, Millas was a key part of two conference championships, a regional championship, and a super-regional appearance. For him, the offseason is a time to get healthy and bulk, this offseason he put an emphasis on the latter.

When talking about the trade, Millas mentioned that moving to a brand-new organization was tough after developing relationships with coaches and teammates in Oakland’s system.

“I knew the A’s had big plans for me; everyone I spoke to thought very highly of me and I came from a lot of good people and friends that I made… that part was tough,” Millas said to me via zoom call. “At the same time, I was very excited to be with the Nationals. For me food was the biggest thing – it was abysmal with the Athletics. When I got to the Nationals, I felt like I was eating at Nobu or some five-star restaurant every day,” he chuckled.

Hopefully this change will help him maintain his goal of eating 4500 calories a day, during the season.

Millas pointed to his former Lansing Lugnut (Athletics High-A affiliate) battery-mates Shuman and Gausch as a mutual support system during their move from Lansing to Wilmington for the Nats.

“Yeah, I think it made it easier and a lot smoother. Seth and I were very close, I think I was even closer to Richard than I was Seth. I tend to gravitate towards the Latin guys for whatever reason,” Millas smiled. “I say that, but I think all three of us were very close and it was nice getting to live together when we all got to High-A Wilmington with the Nationals. It made it really easy because we got to follow each other around while we were learning the ropes.”

The catcher position had been a revolving door for the Washington Nationals before that fateful week in late July — seeing short-term solutions come and go constantly. The last time the Nats’ opening day lineup featured a catcher under the age of 25 was nine years ago in 2013 when Wilson Ramos made his second career opening day start.

Along with Millas, came Keibert Ruiz and Riley Adams in two other trades with the Dodgers and Blue Jays. In a short amount of time, the Nationals had gone from having no depth at the catcher position to a plethora of young viable catching options. In an organization newly rich with catchers, Millas described himself as fourth on the catcher totem pole, but his athleticism could give the Nationals options. When asked about a potential position change to get his bat in the lineup he skipped over first base, the typical secondary position for a catcher, and went straight to corner outfield.

“I think I could benefit [the] team in the outfield,” Millas opined. “I’m good at tracking fly balls — I always have been. I played a little bit in college, I have good athletic ability, and I have good in-game instincts. I think getting used to the cutoffs would be a learning point for me because I haven’t done it in so long, but if you threw me out there, I would hold my own.”

Millas has proven to be a disciplined switch-hitter – in 2021, he walked more times than struck out, an almost unheard-of feat in today’s game, but he wants more out of his bat. Following a season where he slashed .264/.372/.348 in 322 at bats, he went into the offseason knowing his power production was low and explained that he’s working hard to improve in that area.

“I have a new [offseason] hitting coach that’s been great for me,” Millas continued. “He’s very focused on the power aspect of things and getting on plane with baseballs. We do a lot of Juan Soto study, a lot of mimicking player sets, so I’ve been emulating and picking up things from the video review and study.”

Millas’ new hitting coach who he is working with over the offseason is the former hitting coordinator at Extreme Baseball & Softball Club (Collinsville, Illinois), Kevin Graham. Graham has spent over 45 years studying the biomechanics of sports performance and uses his knowledge to train and develop professional baseball players.

The fixes aren’t all mechanical – Millas went on to describe how he felt his hitting approach in the past was too passive.

“I’ve been working on it all offseason. I can’t wait to try and translate it this season,” Millas said. “With Lansing, I went 34 days without a swing and miss, so I would try hitting the ball no matter what, instead of taking big swings that might result in foul balls. I would sacrifice some of my power ability for just hitting the ball,” he went on to say, “I’m going to try and find a good mixture of the two this year.”

One of the most sought-after qualities in an athlete is coachability. By showing a willingness to change his approach and swing mechanics, Millas revealed that he exemplifies a coachable player. He’s a catcher with speed, on-base ability, exceptional defense, and the drive to develop more power. Every Major League organization would be lucky to have that kind of combination in a recently 24-year-old catcher.

Although he doesn’t know at what level he’s starting, Millas hopes to start in Double-A Harrisburg and finish in Triple-A Rochester by season’s end. Those are his goals. As of February 2022, the Rochester Red Wings roster only has one catcher listed in Wellington Castillo, but he officially retired in July 2021. Raudy Read, a catching option during the 2021 season for the Red Wings, signed a deal with the White Sox on February 11th, 2022, so he’s out of the picture as well. With that, we must assume Tres Barrera will start the season as Rochester’s catcher and that newly signed veteran backstop Taylor Gushue will also be involved in some capacity.

With a professional season to reflect on, Millas is making the most of his first offseason. He finds himself behind a few catchers on the depth chart, but he is just getting started in the Nats organization. With a keen interest in improvement, it’ll come down to consistently applying the lessons learned. Millas is ready to prove he’s made the proper adjustments to propel himself into the Major League conversation this season and beyond.