Analyzing the Prospect Haul from the Nationals’ Trade Deadline Moves 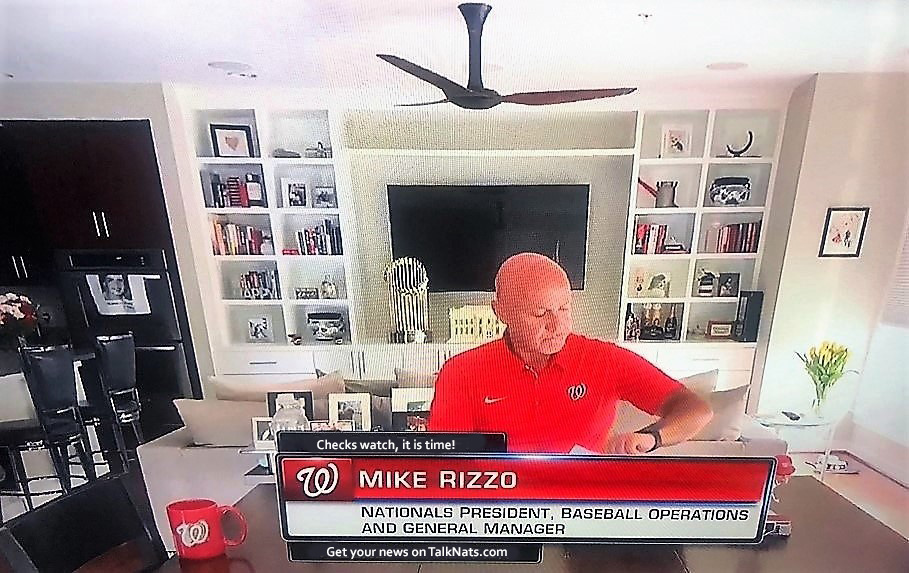 The Nationals made some of the most heart wrenching, devastating moves in recent history on Thursday evening. They sent both Trea Turner and Max Scherzer, franchise icons, to the Los Angeles Dodgers in exchange for multiple prospects. Later that night, Daniel Hudson was dealt to the San Diego Padres. Around that time, it was Kyle Schwarber’s turn to find a new home, this time with the Boston Red Sox. Thursday morning, Brad Hand was traded to the Toronto Blue Jays in what was the first move for the team. The Nationals are punting on this season in exchange for better days in the future. That is admirable due to the landscape of the current MLB with the best teams not only having talented rosters, but deep, rich farm systems. The Nationals had a bottom tier system and needed an infusion of talent.

Brad Hand was not staying in Washington past this season, so the fact that the Nationals were smart enough to deal him for anything is actually something of a win by itself. Riley Adams is actually not a bad player. However, it is not a great trade considering what the Nats could have gotten instead per an analysts discussion on MLB Network.

The Blue Jays have a deep system and the Nats did not have a good amount of big league catchers that can step in and start at the time this trade was made. Now of course the Nats have Keibert Ruiz. We have seen Tres Barrera is playing really well right now, and many fans want to see him play almost everyday to see how he develops.

Adams, though, is a power hitting catcher. His average is never going to be great, but something that his power numbers will overshadow when he is going well is a nice OPS. His glove needs some refinement, but he is an average defensive catcher at this point. If he develops a little more, he can be a decent starting option in time. Expect for him to play at AAA for now. He projects to be a slightly worse version of Wilson Ramos: good pop, decent glove, but a lower batting average.  Of course, we will watch his development and see what he can be after being coached up.

This is the big one to unpack here in a blockbuster trade. Take away the obvious that the Nats gave up their top two players this season. Both Scherzer and Turner were All-Stars  this season. The emotional wreckage of this trade is indescribable. It is one that can simply not be overstated. The Nats were compensated highly for these two players, but some feel the Nats could have scored more if they traded these two stars in separate deals. The Nationals acquired four players who could become MLB players in short order. None of these guys need very much time to be ready as it currently stands, and both Ruiz and Gray have had tastes in MLB.

Keibert Ruiz is the biggest piece here. While it is very difficult to build a team around a catcher, Ruiz might be the guy the Nats can build around for years to come in addition to Juan Soto. That is because of his hitting prowess in the Minors. The switch-hitter has clubbed 18 home runs in Triple-A this season, and has power from both sides of the plate. That being said, he is a catcher and more susceptible to injuries merely due to the nature of his defensive position. He can crush the baseball. No doubt about that one. A pure hitter from both sides of the plate, he has the same hitting tools with the hopes that he can be the Nats version of Buster Posey. That is not an exaggeration as they grade similarly at comparable points of their careers. The commonality with young catchers is that they are very raw with their receiving and other defensive abilities. Ruiz has concerns behind the dish. Although, those can be overlooked with good hitting if he can be coached up and improve.

Josiah Gray is another stud pitcher from the Dodgers’s system. He was their No. 2 prospect in their system. He can dial it up to the mid to upper 90s when needed. He is a pure athlete. The comparison made to Marcus Stroman is accurate when considering the way he pitches. Gray has two plus-plus breaking pitches, and a changeup that is being developed. Many projections see him as one of the future stars in this league because of the way he simply can get outs. He is less of a sure thing as Ruiz, but still a decent shoe-in to be nothing less than a solid Major Leaguer. He has a high floor, and high ceiling which should be exciting to Nats fans.

Gerardo Carrillo is a pitcher that might be able to help the Nats right away. He was developed as both a starter and reliever.  It appears as though he will settle into a role as a reliever in the MLB. He throws missiles. At 5’10, he tops out at 100 mph with some major run and sink on it. His breaking pitches are both very good with a great velocity difference. He has some filthy stuff and really can be a great late inning reliever or back end of the rotation starter.

Donovan Casey is a toolsy outfielder with the highest rated outfield arm in the Dodgers system in 2020, and above average speed. He can play all outfield positions. He has hit for average but at the age of 25 is a few years older than his level. Casey was looked at as more of a throw-in, but can be a placeholder for the Nats if they need one for the time being as he has a chance to prove he is just a late bloomer who can compete for a starter’s job.

Once Schwarber went nuclear earlier in June, it became clear that the Nats would have trouble resigning him due to his ever-increasing price tag. That is what it is, and the Nats  at least got something as far as a return for him. Ramirez is a very promising pitcher that the Red Sox gave up for the slugger. He, unlike many other young prospects, has great command of each of his pitches. The Red Sox got him. They were surprised by how quickly he moved through their system. Ramirez has four pitches, and the change up is a work in progress. However, the fastball, curveball, and slider are all very pure. The biggest thing that Ramirez needs is reps at the higher levels of the Minor Leagues. Expect him to break into the MLB towards the end of next season or early in 2023.

In exchange for World Series hero Daniel Hudson, the Nationals got a pair of intriguing prospects, one more so than the other. Mason Thompson was the main one coming back to the Nats. Thompson is a physical specimen. At 6’7, 223 LBS, he certainly has the frame to play both professional baseball and professional basketball. If the Nationals want to loan him to the Wizards in the winter, he certainly could keep up. Bluntly, he can really throw a baseball hard. His fastball is “explosive”. He projects as a back end reliever in the MLB. It is easy to see why. Thompson throws gas with some nasty breaking stuff as well. Currently, he is one of the best relievers in the Padres’ system.

He is improving his control since moving from the starting rotation to the bullpen. His K/BB ratio is 3:1. Still, he needs to work on keeping the ball in the yard. However, he was playing in El Paso, TX, a hot, muggy area of the country, so potentially that has something to do with the 5.79 ERA he has in AAA this season.

Jordy Barley is the second piece coming to DC in this deal. He is a speedy infielder who needs some development. He has been in the Padres’ system for the past five years, and has yet to move above high A ball. His speed is something he boasts, but he lacks hitting prowess to move him to the next level. He hits like Victor Robles and runs like, ironically, Trea Turner.

In all honesty, this trade is more about who the Nats gave up as opposed to who they acquired but there is potential here with Drew Millas who had a nice 2021 season in the minors to improve his projections. Gomes and Harrison being traded was more ceremonious than anything. This represents the Nats finishing the job of selling off this year. They have gotten rid of each of their veterans with value. Millas is the only player the Nats acquire in this package that is on Oakland’s top 30 prospects list. He, and the other two players received, have yet to play above High A. Millas is a defensive catcher with some bat skills. The other two pitchers are realistically throw-ins, but maybe they will make the MLB in time.

The question of whether the Nationals actually got better through these trades remains to be seen in the long run. Certainly adding two Top-30 prospects with Ruiz and Gray immediately moves the Nats up the charts in farm ratings. One thing that is for certain is the fact that Mike Rizzo and the front office has committed to improving the farm system and making sure that they can boast more organizational depth than in years past. These trades mean that many fan favorites will no longer be a part of the Nationals, but there are some great prospects coming back to the Nats, some of whom will be mainstays in the coming years. So do not fret, Nats fan, the time for the team to shine again is coming sooner than many think. Patience is rewarded to those who demonstrate it.

Of the 11 players the Nats received back in trade, eight of them are already ranked in the team’s top-30. That might say more about how weak the Nats’ farm was before, but also how scouts feel about Ruiz and Gray to rank them at one and two. Soon, new 1st round draft pick Brady House will be added to the rankings as will second rounder Daylen Lile.

The top-10 prospects on Baseball America should be: 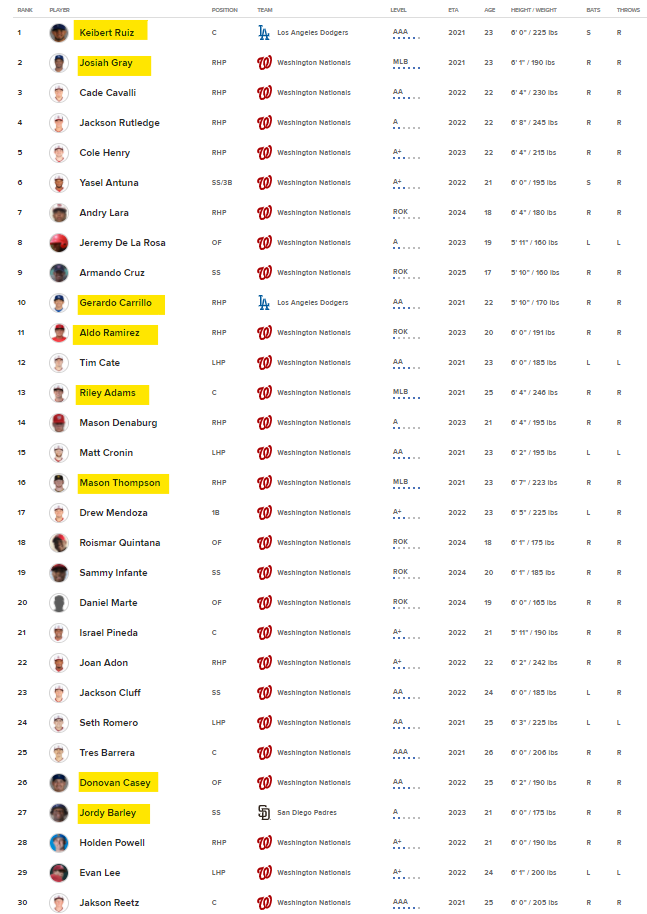 *Note: Jon Lester being traded to the Cardinals was not included because the Nationals did not receive a prospect in return. OF Lane Thomas has MLB experience, and wouldn’t be rated in any prospect rankings anyway.