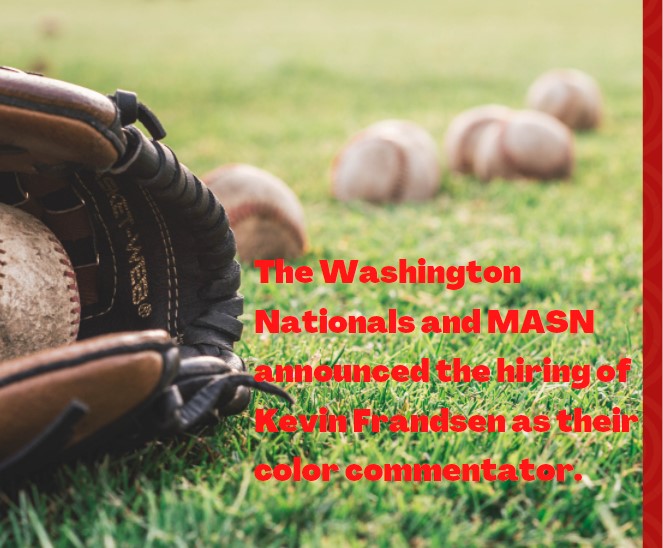 It has been a busy week for the Washington Nationals, on and off the field. On Saturday they announced their international signings highlighted by phenom Cristhian Vaquero. Shortly afterward, the team announced 21 new hires and several other moves for their player development system. This morning the Nats published game times for the 2022 schedule. Not to be finished, the Nats and MASN jointly announced early this afternoon the hiring of former Nats’ player, Kevin Frandsen, as the new color commentator for the Nationals on the MASN network.

“Thrilled, is an understatement to describe the way I feel right now,” said Frandsen. “I’d like to thank MASN and the Lerner family for this tremendous opportunity. … Being able to learn from and work alongside Scott Franzke, Larry Anderson, Rob Brooks and everyone in Philadelphia the last four seasons has been a blessing, but I’m so excited to work with Bob Carpenter and bring games to the incredibly knowledgeable and passionate Nationals fan base. I cannot wait to get started.”

Frandsen was with the Nationals for just the 2014 season, and his most memorable moment was actually in an interview as he responded to MASN’s Dan Kolko during a clinch of the NL East in a clubhouse celebration.

“There is no wrong pipe!” Frandsen responded to Kolko after some spraying of alcoholic beverages went down Kolko’s throat into the ‘wrong pipe.’

That quote lives on in Nats’ lore, and Frandsen gave the background of what he was feeling that night.

“So that night, not a lot of Nats fans know this because it wasn’t really talked about until way later: that was the 10-year mark of my brother passing away,” Frandsen explained. “And that was the first time I celebrated a divisional championship in, at that time, 10 years in pro ball. So there’s a lot of emotion in there, too, and it was just frickin’ awesome. I just remember seeing Kolko, because we always had so much with him that he was always a part of it, that when he was interviewing, it was just like he was one of the boys, and you’re just there celebrating and he’s there celebrating. He said what he said. I said what I said. Can’t complain during that time.”

There you have it and the videos still exist.

I can’t believe Dan Steinberg’s Vine of Frandsen proclaiming “There is no wrong pipe!” still exists. But what did he even mean? 🤣https://t.co/ZbZ42x2nJa

After the 2021 season, MASN parted ways with former long-time color commentator F.P. Santangelo whose contract reportedly was not renewed. Santangelo was pulled from calling Nats’ games in the wake of a reported sexual misconduct allegations, that he insisted were “untrue,” and eventually Santangelo did return to finish the 2021 season. Frandsen replaces Santangelo, and it has to be bittersweet since the two are friends.

Most recently, Frandsen was the radio voice of the Philadelphia Phillies. He was hired by Philadelphia in 2018 and covered four seasons for the Phillies before taking this job with MASN. Since 2019, Frandsen has also hosted shows on MLB Network Radio, and had worked on AM radio in the San Francisco Bay area on KNBR 680 AM. Coincidentally, Frandsen did radio and podcasts with Santangelo’s son about the San Francisco Giants.

Of course before his broadcasting career, Frandsen had a long baseball career with several teams starting in 2004 after he was drafted in the 12th round from San Jose State University. Frandsen played nine Major League seasons with the San Francisco Giants (2006–09, 2015), Los Angeles Angels (2010), Philadelphia Phillies (2012–13) , and the Washington Nationals (2014). He also had minor league stints with the Arizona Diamondbacks and Boston Red Sox.

While Frandsen battled injuries in his career, nothing was tougher than losing his brother D.J. to cancer in 2004 when Frandsen was just entering the minor leagues. He would later establish 19 For Life, a charitable foundation to raise funds in memory of his brother.

“My brother lived a life of integrity, passion and love for his family,” Frandsen said. “We wanted to think of something that reflected that and our family and a bunch of his friends came together with this plan of ‘19 For Life.’”

The foundation’s bocce tournaments were legendary, and you can expect Frandsen to do some events in Washington going forward. Frandsen and his wife Amanda, named their son, Daylen Jon (“DJ”), after his brother. The couple also has a daughter, Tenley. Most recently the family was living between San Jose, California, and a suburb of Philadelphia in Haddon Heights, New Jersey. They will start house hunting now in the D.C. area.

“MASN is excited to welcome Kevin back to Washington,” said MASN Senior Vice President John McGuinness. “He was a high-energy, well-prepared gamer when he played here. Nats fans can expect Kevin to bring those very same qualities and add his unique insights to the broadcast booth. Paired with Hall of Fame shoe-in Bob Carpenter, MASN will continue to deliver best in class game coverage production. Watching Bob draw on Kevin’s in-depth knowledge gained from his years as a player and analyst, in the highly competitive NL East, will keep fans engaged and clamoring for more.”

On the field, Frandsen was a “Swiss Army Knife” player. He played every infield position, and every outfield position except for centerfield in the Majors. He even played as a designated hitter. In his youth, he pitched, and the only position he didn’t play was catcher. He finished his career with a .258 batting average, and one career at-bat in the postseason which happened to be for the Washington Nationals in 2014. Frandsen often tried the spectacular plays in the field, and turned in a memorable defensive Web Gem with a behind-the-back play.

In one of Frandsen’s first interviews in 2014 as a Nats’ player, he caused some controversy. In an interview on 106.7 The Fan radio, Frandsen was asked which player on the team has impressed him most.

“Rendon,” Frandsen answered. “Without a doubt. He is as impressive as any young player; in all honesty, he’s the best young guy we have. By far. I don’t think there’s anyone in the same sentence as him, as far as young guys.”

After his comment, Frandsen was given an opportunity to walk that back after he was asked if his answer considered Bryce Harper into the equation and Frandsen said it did. Harper was supposed to be the star of all the stars on that team, and Frandsen’s words made the rounds with many wondering if that would cause friction in the Nats’ clubhouse with Harper.

After the addition of Frandsen replacing Santangelo, the rest of the Nats’ TV and radio broadcasters return for 2022 as expected. TV play-by-play voice, Bob Carpenter, announced last year that he would be taking more vacation time during the season. It will be Carpenter’s 17th season with MASN and the Nationals, and his 39th in Major League Baseball. Carpenter will turn 69 this year.

This entry was posted in Feature, MASN. Bookmark the permalink.
← Previous Article | Next Article →