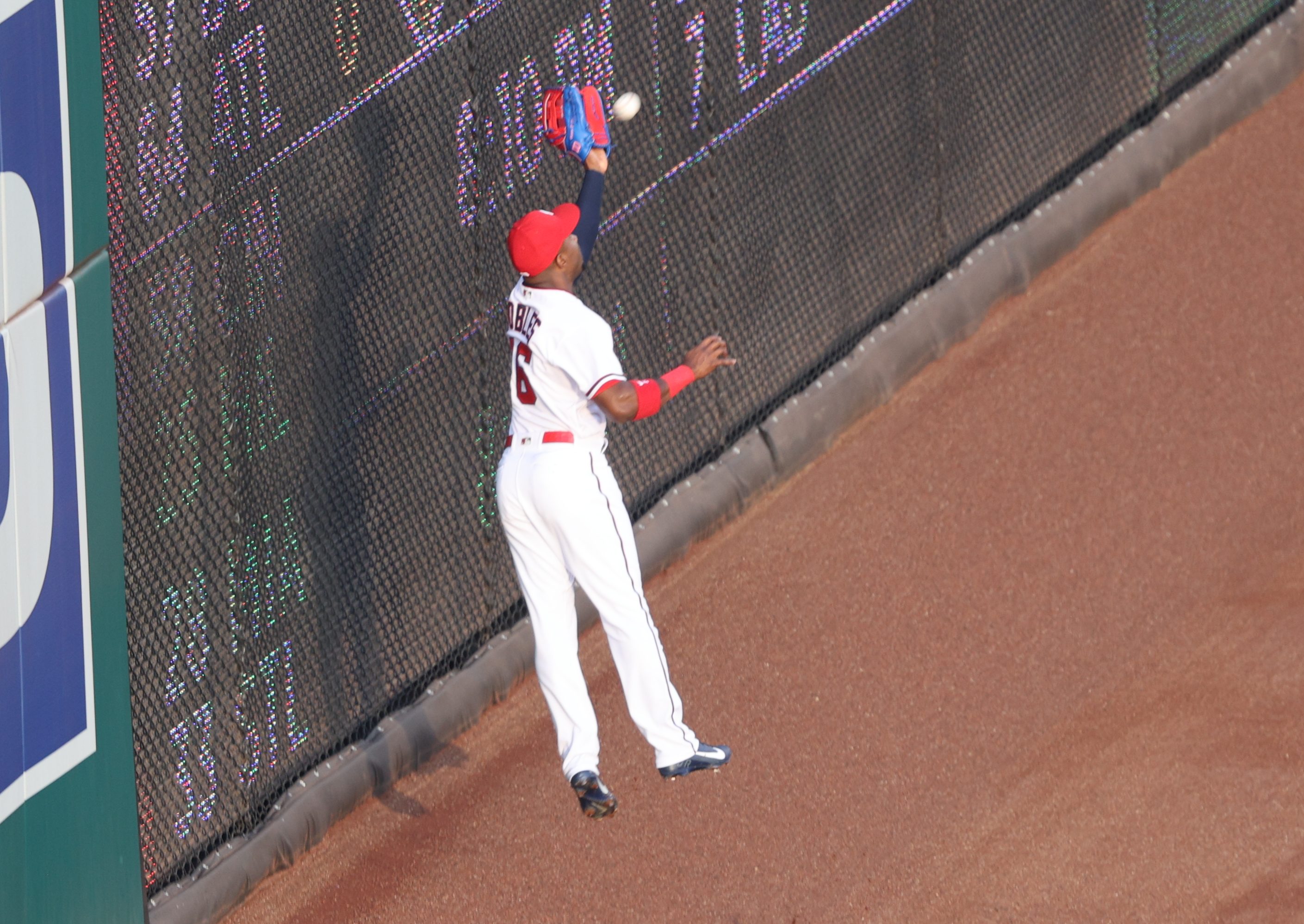 As we are almost done with the player evaluations, we have some interesting names on this list as we move further into the players with last names beginning with “R” and into the “S” names. This list contains many Washington Nationals players who will be on the bubble in the offseason as well as Spring Training.

Victor Robles, CF:  It was exactly four years ago when Robles was the shining star of the Arizona Fall League and named the MVP. He had a little bit of big league experience that year as he landed on the postseason roster. All arrows pointed up for Robles. He might be the most bewildering player in the entire organization.

In 2019, Robles was a key piece in the Nats’ World Series season with a mix of power and elite defense, and energizing baserunning. In 2020, he took huge steps back in every category, most of which the media circuitously tried to place the blame on the 10-15 pounds of muscle he added in the offseason after the World Series. Even Robles and his trainer were convinced the muscle gain was the culprit after his disappointing 2020 season. The Nats brass remained bullish on Robles to start the 2021 season.

By the time the team was ready to sell off pieces in July, Robles was barely hitting above the Mendoza Line. Not only was he not getting base hits, he was making poor decisions in the field and on the bases. His speed never got back to the elite levels he achieved in 2019, and that remains part of the mystery. Figuring out why his hit tool derailed, though, was the main challenge that never got resolved. His lack of power and productivity resulted in his demotion to AAA in early August. That being said, Robles did not sulk in the minor leagues, as he hit very well and demonstrated that he deserves another shot. His status moving forward is murky though, but he most likely has a spot in the years to come.

Jefry Rodriguez, RHP: Jefry Rodriguez is yet another player in his second tour of duty with the club. He was traded away by the team in the deal that netted the Nats Yan Gomes, but found his way back. He made a spot start in a doubleheader, pitching well enough to stick around for a few more weeks. Rodriguez was not very notable with the team, but he was slightly below average according to advanced metrics. His role in the organization is unclear as the team just re-signed him to a Minor League deal, but he might have some upside in a long-man in a relief role.

Josh Rodgers, LHP: Perhaps the best surprise for the Nats in the second half of the season, Rodgers was a great addition to the club. While advanced stats don’t favor him because of his lower K%, he gets a lot of weak contact. He was able to pitch effective, meaningful innings in the Nats rotation. Rodgers combined a level of swagger and confidence that was desperately needed by the entire team. He certainly makes the case for to get another chance in 2022.

Jhon Romero, RHP: Romero made his MLB debut with the Nats late in the season, putting up pedestrian numbers in the process. He was not horrible, but he also did not light the world on fire. That being said, the Nats have numerous spots up for grabs in the bullpen in the coming year(s), so maybe Romero can stick around for a bit.

Joe Ross, RHP: For Ross, this was a pivotal year after he sat out the 2020 season. He showed promise in Spring Training, but his lack of consistency made him a frustrating player to monitor. He would dazzle in one outing, being seemingly unable to miss the strike zone with all of his pitches. Almost out of nowhere, he would implode, losing his command entirely. This was not just between starts, but even in the middle of his starts. His season ended prematurely when he underwent Tommy John surgery for the second time. Not only is the road to recovery long and arduous, but he will be a non-tender candidate in the offseason. He certainly has a future in the MLB upon his return (when he is healthy), but the question is whether or not the Nats decide to keep him around and wait for his return.

Keibert Ruiz, C: Ruiz was the other main prize the Nats received for Scherzer and Turner. He began in AAA, but struggled early. He slowly turned it around at the plate, and played well enough to earn a callup to the MLB. Similar to what happened at AAA, Ruiz started slowly with the Nats. By the end of the season, though, he turned it around and proved why he is seen as a generational talent behind the plate. He has a lot of development, but he will most likely have the chance to do so at the big league level.

Adrian Sanchez, UTL: Sanchez is someone who the Nats often call up to provide an offensive boost. He is not someone who will be a game changer, but provides steady play regardless. He is what some fans call “a poor man’s Starlin Castro ” due to his bat skills and questionable fielding ability. It is hard to say if he has a future with the organization, but players like Sanchez usually find a way to stick around.

Max Scherzer, RHP: For the fans who have yet to get over the trade, this is the part to scroll away. Scherzer was the ace of the rotation for the entirety of his seven year deal with the Nats. With 2021 being his contract season, it was speculated that he could be shopped should the season go south for the Nats. It did go south, and ultimately he was dealt. There was a reported trade in place to send Scherzer to San Diego, but it fell through. He was traded to the Dodgers, and had been lights out down the stretch for them. He is set up for a big payday in the offseason, and a reunion with the Nats is not out of the picture, albeit very unlikely.

Kyle Schwarber, LF: Two weeks in June. Schwarber transformed into Barry Bonds in his prime for a mere two weeks in June. If a pitch was even close to the strike zone during this stretch, there was a very good chance it ended in the bleachers. He mashed for weeks, and became a national phenomenon as he turned the season around. The Cinderella story saw the clock strike midnight when Schwarber tweaked his hamstring on the bases against the Dodgers. He never played another game for the Nats following the injury as he was traded to the Red Sox at the Trade Deadline. He is a free agent and has earned a large payday in the offseason.

Juan Soto, RF: Ah yes, the wunderkind. Soto is one of the favorites to win the NL MVP. There is little to say about him that has yet to be said. At 22 years old, he became one of the youngest winners of the award in league history. Looking at his Baseball Savant page, there are few more beautiful sights. He is dominant in just about every facet of the game. He commands the batters box unlike anyone else before him and maybe unlike anyone else who comes after him. Think of a hitting category, and Soto probably dominates in it. He led the league in walks, OBP, among numerous other statistical categories. The scariest part: he might just be scratching the surface of his capabilities. At the age of 22, he seems like he has been a professional for a decade, but he has only been in the MLB for a mere four seasons. The number one priority for Mike Rizzo and the Lerner family this offseason: give Soto as much money as he wants. Talents like him do not grow on trees and there is no way they can allow him to slip away.

Andrew Stevenson, OF: Stevenson was another player who did not have a defined role. He mainly resided on the bench, but was a capable starter when called upon. Stevenson will most likely be the fourth outfielder moving forward. That does not mean he is unable to step into a starting role. He is one of the best pinch hitters in Nationals history and always seems to come up clutch. Every successful team is able to count on depth when injuries occur, so keeping Stevenson around seems like a no brainer.